NEWARK – The prosecution strove to portray West New York Mayor Felix Roque as a man just as willing to dive into a backroom cyberspace scrum as his anonymous tormentor, who turned out to be Hudson County Freeholder Jose Munoz.

Roque’s defense team beat up Munoz on the stand, and now it was the prosecution’s turn to slap around Roque.

The mayor and his son Joseph are charged with hacking and disabling Munoz’s www.RecallRoque.com website, which Munoz set up under the false identify of Maria Pasquale, a nonexistent person.

A doctor specializing in pain management and an ex-Army colonel, Roque took the stand this afternoon in a blue suit and tried to parry prosecutors’ email evidence showing him reacting positively when his son informed him that Munoz’s anti-Roque website was no more.

“Wow, you are good,” the prosecution quoted back to the mayor the message he sent his son when Munoz’s website went belly up, a hacking victim.

“I was happy he was blogging,” Roque said in characterizing the message to his son.

“You were happy he was breaking into accounts and getting information, weren’t you?” the prosecutor asked.

Roque acknowledged giving a message to his son, which the prosecutor reminded him he had asked Joseph to ask a friend to post.

The message included chest-thumping language directed at U.S. Sen. Bob Menendez, something to the following effect: “Dr. Roque is fighting for town. He has no owner and owes his success to no one. …He will not be manipulated or bought. He is 100% Army strong. He kicks butt. …Menendez, beware engaging the colonel.”

But when the prosecutor sought to ascribe Roque’s motive for wanting a friend to post the message as his wariness about being associated with Joseph Roque’s handiwork, the mayor balked.

“It wouldn’t have made a difference if it was Joseph or a friend,” the mayor said.

Seeking to deflate Roque’s image as a noble man of honor who simply responded to anonymous attacks when he leaned on his son to help him fight invisible enemies, the prosecution alluded to a quote Roque allegedly used in a punishing tone regarding former employee Alian Gomez.

“Did you say you would stick pins in his head?” the prosecutor asked the mayor.

“I’m not a voodoo doctor,” Roque responded. “I don’t deal with people disrespectfully. I don’t talk that way to my patients.” 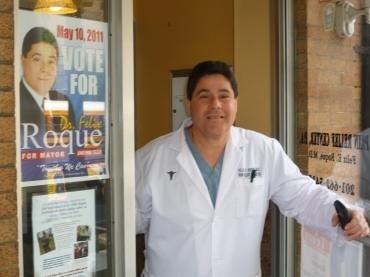