After what may have been the nastiest–and most high-profile–race for comptroller in New York City history, Manhattan Borough President Scott Stringer eked out a four-point win tonight over his better-known rival, ex-Gov. Eliot Spitzer.

Mr. Stringer and his wife took the stage at the campaign’s victory party to great applause, cheers and even the throwing of a hat.

Thanking family, friends and his campaign staff, the victorious candidate energized the crowed and made a “promise to bring integrity, experience and leadership” to the office–a less-than-subtle final dig at Mr. Spritzer, who was forced to resign five years ago in the wake of a prostitution scandal.

“I believe public office can make a difference,” he concluded to the group, gathered at Slate restaurant in Manhattan, leaving the stage amid flashing lights and cheers.

The lesser-known Mr. Stringer was once decidedly the underdog in the race, trailing by almost 20 points in one poll just weeks ago. But Stringer spokeswoman Audrey Gelman said a diligent plan focusing on “integrity”–to show contrast with Mr. Spitzer–won the day.

“We ran a methodical campaign, we stuck to the plan … We introduced more New Yorkers to his values, his record and his vision for the office,” she said. “Integrity and high ethical standards, maybe it is out of fashion, but it’s how he rolls.”

As for Mr. Spitzer, with whom the candidate waged an aggressive attack ad war in the final days of the campaign, Mr. Stringer only had kind words tonight.

He described Mr. Spitzer’s call to concede the race as “very gracious” and said his once-bitter rival “wishes me luck on this journey.”
Mr. Stringer now heads into the general election against Republican John Burnett as a heavy favorite. 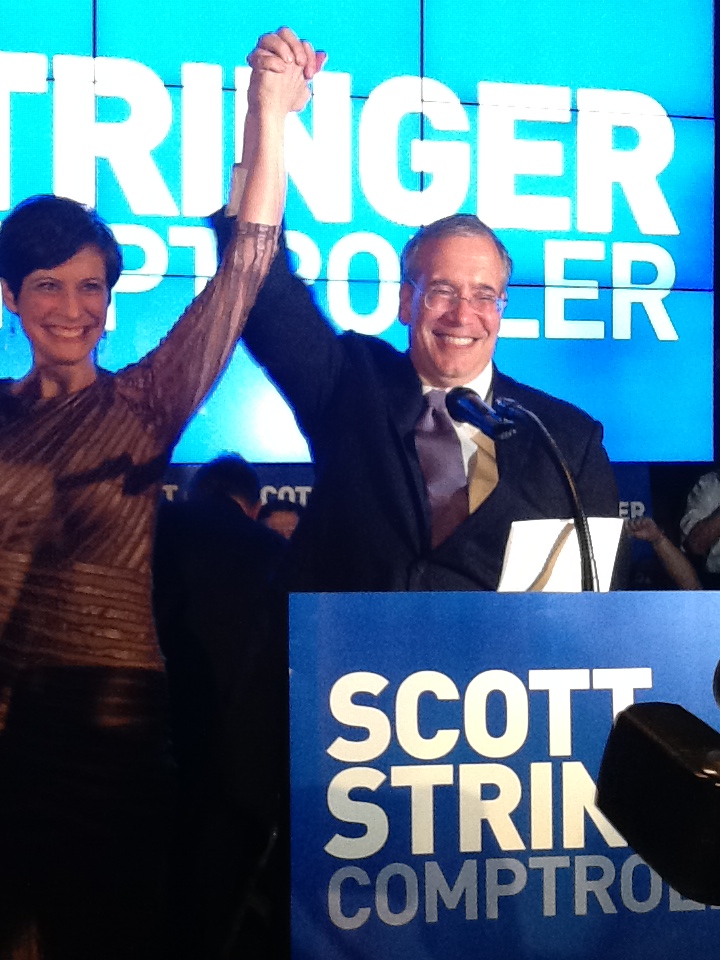