The former publicist/columnist/TV host checks his smartphone for a dish.

In the basement boiler room of the celebrity-industrial complex, burned by its machinery but still pulling the levers, is a man named Rob Shuter.

A former top publicist, with a glittering roster of clients that included Jennifer Lopez, Diddy, Bon Jovi, Alicia Keys and more, Mr. Shuter was fired from Dan Klores Communications (DKC) in 2007 after a string of missteps involving Paris Hilton, Britney Spears and Jessica Simpson. Not all of them were his fault, but it didn’t matter. The writing was on the wall, as blogs and newspapers had already begun to depict him as a tabloid villain—the archetypal lying publicist, whose infamy overshadowed his clients.

It was publicly messy, but Mr. Shuter landed on his feet. Following a stint at OK magazine, he launched the Naughty But Nice column for AOL/Huffington Post (now published on his own website). And now he is reinventing himself once again, taking his online gossip personality to the TV screen.

Starting next Monday, he will anchor a new VH1 morning program called The Gossip Table, featuring four other reporters (Marianne Garvey, Noah Levy, Delaina Dixon and Chloe Melas), discussing original celebrity items. It is a remarkable career arc for a man who has been the ultimate show business insider but also one of the most divisive and controversial figures in celebrity media.

“I am one of the few columnists who has walked the red carpet of the Golden Globes with J.Lo,” Mr. Shuter, who is now 40, explained. “I have been in crisis PR meetings, and I know when publicists call me and are lying, because I did it myself.”

Gawker, never known for being gentle to its targets, has lavished Mr. Shuter with a savagery reserved for the grandest villains. “Sleazy former celebrity uberflack,” “great fabulist” and “skilled at … lying on behalf of celebrities” are just some of the bouquets the site has sent his way.

Addressing these accusations, Mr. Shuter told me, “I don’t think that I’m a liar. I don’t think I’ve told lies.” Although he added, “I love me a stoo-oory,” singing the vowel with his British accent.

When I used Stephen Colbert’s expression, “truthiness,” to describe his previous dissembling, he responded: “As a publicist, I was paid by clients to get across the image they wanted. It was during this time where I think your word ‘truthiness’ is accurate. However, when I became a columnist, everything I reported I stand by.”

Mr. Shuter claims that breaking the news that Conan O’Brien would be fired from The Tonight Show and announcing John and Kate Gosselin’s divorce are among his scoops.

Mr. Shuter’s early career as a publicist developed through the entertainment industry connections of his future husband, Bruce Sussman. A long-time collaborator with Barry Manilow, Mr. Sussman is a co-writer of the song and stage musical Copacabana. The couple met in 1993 when Mr. Shuter, who is 20 years younger, was a university student selling ice cream at the Edinburgh production of the show.

“Bruce said it was the most expensive ice cream he’s ever bought in his life,” Mr. Shuter recalled. They married in 2011.

With the help of Sting’s immigration attorney—an introduction made by Barry Manilow—Mr. Shuter worked his way up through New York PR agencies, including Boneau/Bryan-Brown and Bragman Nyman Cafarelli. His last stop was at DKC, where he handled some of the agency’s most valuable celebrity clients.

Mr. Shuter had seemingly reached the PR mountaintop. But in the mid-’00s, he played a role in three mini-scandals that combined to damage his reputation and ultimately end his career as a publicist. The first came in 2005, when he supplied an item to Page Six about client Paris Hilton being assaulted in a London nightclub by Greek socialite Zeta Graff. In an extra flourish, the story reported that the nightclub was playing “Copacabana” as Ms. Graff attacked.

It was not true. Ms. Graff filed suit for defamation, and Ms. Hilton settled for a sum reported to be “north of $2 million.”

Next, Ms. Hilton turned her legal team against Mr. Shuter, accusing him of being responsible and seeking $10 million restitution. His defense was that he had only passed on the information she supplied.

“Zeta went after her, and she came after me,” he said. “Ultimately, I won; she had no evidence. We had all the evidence: texts and emails.”

The week that the attractive new couple appeared on every cover, Ms. Simpson showed up on Rosie O’Donnell’s talk show and promptly, inexplicably, denied the relationship.

“I believe it was the first thing Rosie asked her,” Mr. Shuter said. “We were all surprised by her answer. In her defense, Jess was not prepared for such a direct question.”

Gawker summarized the fallout: “In one masterstroke, Shuter had shattered his own credibility (ha), made his own client look like a desperate liar, pissed off fellow celebrity flacks and, perhaps worst of all, made enemies of some powerful celebrity magazines. He was then fired by [Jessica’s manager-father] Joe Simpson, for all of the above reasons.”

It is poetic injustice that in this case Mr. Shuter was telling the truth.

The final mishap occurred shortly thereafter. Having heard that Britney Spears was looking for a new publicist, Mr. Shuter approached her manager. What he didn’t know was that she had been a former client of his agency and left on bad terms. For that stated reason, and for violating an industry protocol against “poaching,” DKC President Sean Cassidy told him it was time to go.

Contacted for this article, Mr. Cassidy emailed: “Fabulousness was never something Rob wanted to have a vicarious relationship with. So, despite the fact that he was a real PR talent, I always knew he would end up on the other side of the red carpet.”

(And that, ladies and gentlemen, is how you spin a termination.)

The Britney incident ended up in the Lowdown column of former Daily News gossip Lloyd Grove, who was not a fan of Mr. Shuter’s methods and occasionally featured him negatively. With both the blogs and mainstream press against him, it seemed that his career was over for good.

I was also a Daily News gossip at the time, writing the Gatecrasher column (though Mr. Shuter and I had a more cordial relationship). Back then, the typical Hollywood publicist was a magisterial woman of a certain age, who would call from L.A. to scream insults, lie to you and slam the phone down, in that order. Sometimes, I’d hang up, and there would be spittle on my ear.

Mr. Shuter took a friendlier approach and was usefully willing to trade information. Celebrity publicists are always slippery with the truth, and I didn’t think he was dramatically worse than his industry peers.

He was also a lot of fun. He once called and asked if I knew of a Downtown gay bar that had a VIP section that was both secure and highly visible. I suggested XL on West 16th Street, and that night he took his client, Naomi Campbell, who was feeling in need of a pick-me-up.

The homosexuals of New York reacted with predictable hysteria, and, after 30 minutes of adulation, Ms. Campbell exited with her sense of grandeur restored.

“Naomi came to us every time she had a crisis, so she was a frequent flier,” Mr. Shuter recalled. He also got Ashlee Simpson as a crisis client, after her infamous lip-synching appearance on Saturday Night Live, which was his entrée to her older sister.

“A member of Ashlee’s entourage told me the most important person in the Jessica Simpson machine was her dog, Daisy. If I turned up at the Ritz Carlton and Daisy liked me, I would get Jessica,” he said. “Well, I have two little show dogs, so I put some pastrami in my pocket. And when I showed up, Daisy went coco-bananas, and I got the account.”

You might think Mr. Shuter’s trove of anecdotes—“Diddy would call me Mary Poppins to my face. For my birthday, Tyra Banks gave me a picture of herself that she drew and signed”—would provide rich material for his second act as a gossip writer. But his style as a columnist is more … intuitive. He doesn’t so much report a story as infer it from what’s happening in pop culture. For example, a recent “exclusive” involved Paula Deen “meeting with several different networks about returning in a new show.”

The item read: “‘Paula has made peace with the past and how unfairly she was treated and is ready to move on,’ a family friend tells Naughty But Nice Rob. ‘She thinks the best way to correct the past is to rebuild her brand and not hide in the shadows.’”

That Ms. Deen would again like to be a highly paid TV personality is no doubt accurate. But Mr. Shuter’s stories often do not contain any more specifics than you might get from simply discussing the subject with your friends. Frequently, there is no information that is provably true or untrue in his items.

“Rob is special,” Mr. Farley, a four-time Emmy-winner, said. “It was because of his success on Big Morning Buzz Live that I even came up with the idea.”

A test-run of The Gossip Table aired for four weeks at the beginning of summer, and Mr. Farley said its reception justified another order of episodes from Sept. 30 through the end of the year.

At a party to celebrate the show’s debut in May, Mr. Shuter burst in to a blaze of flashbulbs. He was accompanied by the tabloid celebrity known as Tan Mom, who at 7:30 p.m. was already drunk and later vomited on guests at the bar. (Three weeks later, she entered rehab.)

But Mr. Shuter is not taking that as an omen.

“It’s hard to upset me, after all the mean things Gawker wrote about me,” he said. “I think I pissed a lot of people off who probably leaked shit on me. When you’re at war with [Jessica Simpson’s ex-husband] Nick Lachey and his people don’t like you …”

His voice trailed off, before bouncing back, upbeat.

“Now I’m on the other side,” he smiled. “I understand why I became such a bloody character!” 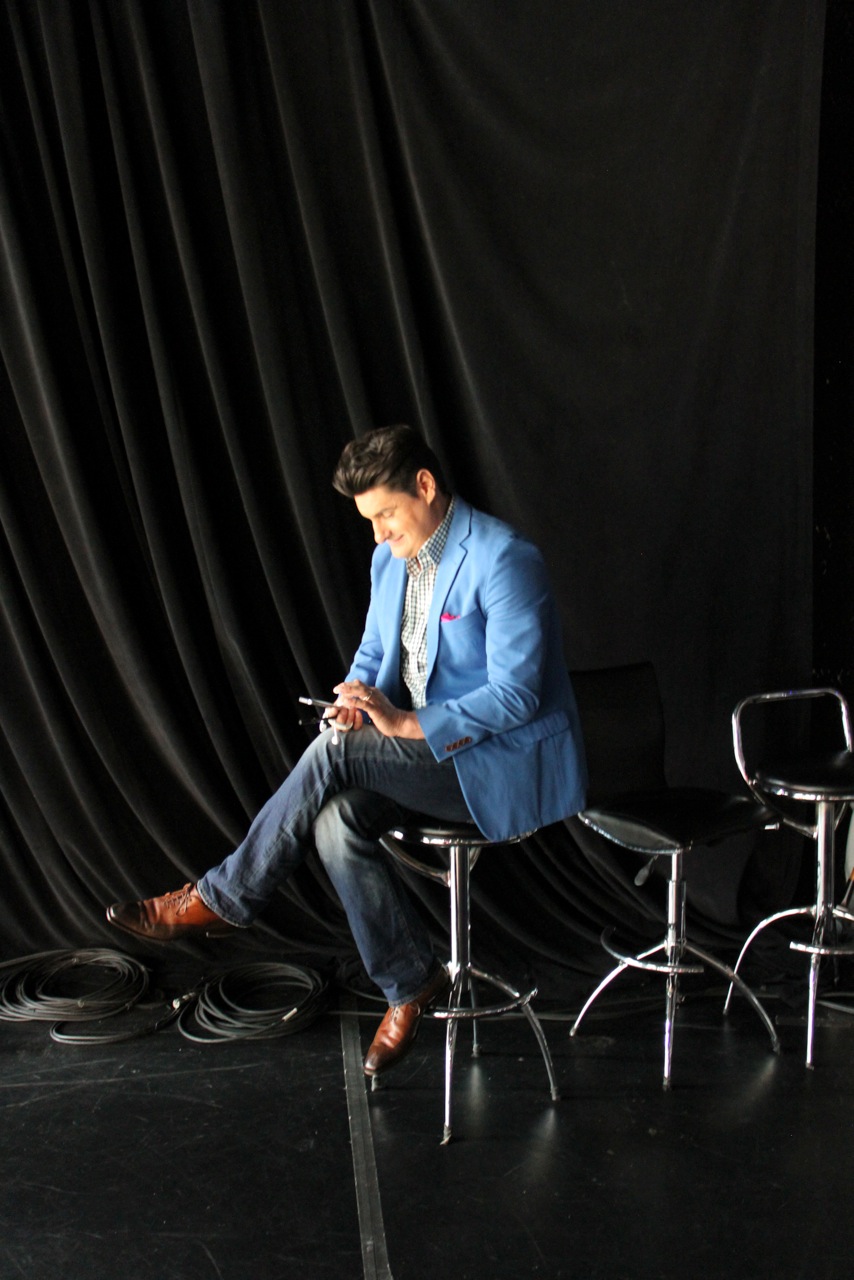