Anna Therese Day had just returned from Northern Syria when The Observer met her at a coffee shop near Union Square on a recent afternoon. A 25-year-old in pearl earrings and a filmy white top, Ms. Day did not look like she had just spent days alone, in an undisclosed location near the battlefield of Aleppo, interviewing self-described radical jihadists with ties to Al Qaeda.

“Syria for me is everything; it’s the most important story in the world right now,” Ms. Day said. “We have the worst humanitarian crisis since Rwanda, and chemical weapons have been used, and we don’t have news outlets willing to go in right now.”

Ms. Day freelances amid a threat of kidnapping and injury so high that many publications won’t send their staff, relying instead on dispatches from freelancers and stringers who cover the conflict independently. During the wars in Iraq and Afghanistan, most reporters got access by embedding with the military, which required an assignment from an editor and financing from a news organization.

But the business model changed during the Arab Spring, where Ms. Day and many other rookies were happy to offer their services to media organizations with shrinking foreign bureaus. Ms. Day, who had majored in Middle Eastern studies at the University of Wisconsin, was studying for a master’s degree in Israel in January of 2011 when she heard from activists she had met during a college semester abroad that protests were planned in Egypt. She flew to Cairo to witness the action. When the revolution erupted, Ms. Day was on frontlines of Tahrir Square, camera in hand.

“The energy was echoing through downtown Cairo, and my adrenaline was through the roof,” Ms. Day said, describing the rush that hooks many a young war correspondent. After she posted photos on Facebook of bloodied protesters clashing with police under a cloud of tear gas, someone from the Huffington Post called Ms. Day to get more reporting.

Soon, other outlets got in touch, asking for dispatches from the ground. “There are like 50 young freelancers who went from Egypt to Libya to Bahrain and then to Syria, and we all did this loop covering the revolutions, and it was probably the best career move for all of us,” Ms. Day said. “Because how many people get to get out of college now and become foreign correspondents?”

THIS SUMMER, Francesca Borri, an Italian journalist, wrote an article for The Columbia Journalism Review about the perils that she faces as a freelancer in Syria. Many were stunned that Ms. Borri gets paid $70 per article, which barely covered the $50-per-night mattress on the ground in a rebel base (where Ms. Borri wrote that she got typhoid), let alone insurance. “The editors are well aware that $70 per piece pushes you to save on everything. They know, too, that if you happen to be seriously wounded, there is a temptation to hope not to survive, because you cannot afford to be wounded,” Ms. Borri wrote. “But they buy your article anyway, even if they would never buy the Nike soccer ball handmade by a Pakistani child.”

Although $70 is on the low end, it’s not that far from major outlet rates. According to journalists we spoke to, most print publications pay in the low hundreds. TV pays more, but not by much. It’s almost impossible to come out ahead while covering a war zone, with myriad costs including drivers, lodging, plane tickets, safety gear, insurance and so-called fixers, locals who act as translators and guides and charge upwards of $100 per day.

“You have no guarantee of selling of your story to cover the significant expenses you incurred reporting it,” said Ayman Oghanna, a freelance photojournalist and reporter based in Istanbul. “Out in the field, that can drive you to stay longer or take greater risks to get something you think may sell. It also means you don’t have an editor to coordinate with on decisions or telling you, for your own safety, enough is enough, pull out and take care of yourself.”

And it isn’t just the cost of covering the war. The new model of relying on freelancers doesn’t take into account the unprecedented dangers in Syria, where journalists are very often targeted from the moment they cross the border.

Veteran journalist Marie Colvin died last year during a rocket attack on Homs, after Syrian forces reportedly pledged to kill “any journalist who set foot on Syrian soil.” According to the Committee to Protect Journalists, at least 13 local and international journalists are currently missing in Syria, a number that doesn’t include aid workers, fixers and the cases that are unreported due to the belief that, in some cases, publicizing a kidnaping makes it more difficult to negotiate release. Austin Tice, a freelance journalist who was captured in Syria, has now been missing for more than 13 months. James Foley, a freelance journalist for Agence France-Presse and GlobalPost, has been missing since Thanksgiving. “The nature of the wars has changed.

“It’s very volatile and unstable,” said Sebastian Junger, a veteran foreign correspondent and novelist who got his start covering Bosnia. “People are getting killed and kidnapped, and editors are reluctant to take on the risk.”

So are some correspondents. “The Syrian War is being covered by freelancers,” said Janine di Giovanni, a contributing editor to Vanity Fair and an author of an upcoming book on Syria. “Experienced journalists do not want to do it, because it’s so dangerous.” For a publication, sending a reporter into Syria right now means a steep rise in insurance costs and the possibility that the media company will be on the hook for negotiating and arranging release of a reporter held for ransom.  Many reporters apply for grants and fellowships (Ms. Day recently earned a Fulbright), which enable them to pay their bills but don’t stem the systemic problem of news outlets leaving war journalists to fend for themselves, without taking on either the institutional nor the moral responsibility of sending someone into harm’s way.

“The people online who summarize our articles with maybe a line or two of snark make a lot more money and have a lot more stability than people who are actually out there doing this work, looking these people in the eye and telling these stories,” said Danny Gold, who saves up to go to conflict zones by stringing for The Wall Street Journal while he is in New York.

Mr. Oghana, 28, has covered war zones (Iraq, Libya, Lebanon, Syria, Palestine and Afghanistan) for outlets including The New York Times, The Economist and Time since 2009. But this past year, he began noticing a change. Rather than committing to assignments as they had in the past, his editors began responding to his pitches by offering to take what he gets when he returns.

In mid-December, Mr. Oghanna’s wrote a manifesto on his Facebook page, calling out editors for substituting assignments for spec work. “Any editor who has told me they will only take my Syria work on spec—big publication, small publication—even if it may harm my future career, I have told them straight: That is a precedent that should never have been set,” he wrote. “It actively encourages freelancers to take risks and die alone without any support. To be honest, it sickens me.”

Writing on spec means “no one has your back. If something goes wrong, you have no institutional support. You’re alone. No one to coordinate a release if you’re kidnapped, to help you seek medical assistance, to notify your loved ones if something bad happens,” Mr. Oghanna told The Observer. “It also means you have less credibility in the field. If you are kidnapped and accused of being a spy, you don’t really have much evidence to disprove it.”

The Facebook post got a big reaction from freelancers who cover conflict zones, many of whom, such as Ms. Day, have only ever worked on spec. In June, Mr. Oghanna, Ms. Day and other conflict freelancers launched Frontline Freelance Register, an advocacy group to represent unaffiliated reporters in conflict zones. In the first months, more than 300 people joined the group.

SOME NEWS organizations have decided to stop buying work from stringers altogether. After Ms. Colvin, a correspondent for The Sunday Times, was killed, the British newspaper decided not to take any more freelance work from the war-torn country.

“In the light of what happened to Marie Colvin, we have decided we do not want to commission any journalists to cover the situation in Syria,” Policy Deputy Foreign Editor Graham Paterson said at the time. “And we take the same view regarding freelancers speccing in material, even if they have returned home safely.”

AFP Global Editor in Chief  Phil Chetwynd said there have been cases where his news agency has declined work from stringers in order to discourage undue risk. “It’s very easy to close your eyes and just take what’s given to you,” Mr. Chetwynd said. “But it’s important not to allow freelancers to fill the vacuum created by the economic reality of the industry.”

For regular freelancers, AFP provides hostile environment training, equipment and insurance, which includes compensation to families and paying for emergency evacuation. (No publication will comment on kidnapping insurance, because doing so could invite perpetrators to target reporters.) Representatives from both The New York Times and The Wall Street Journal said that the publications rely on staff in the region for coverage of Syria, although neither would call it an institutional policy.

Mr. Junger said that news organizations should get together to establish industry standards. “At some point, it becomes exploitive,” he said. And yet, regardless of the danger, there will always be reporters compelled to cover wars, with or without the proper backup. “You want to witness history,” Mr. Gold said. “You want to feel like what you’re doing matters.” 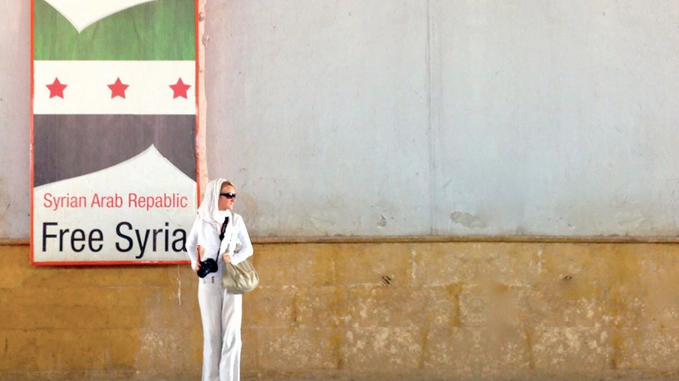