And on the third day of Fashion Week, God (well, Dominique Ansel of “cronut” fame) created the “magic soufflé.” The pastry—a chocolate soufflé with a molten center enclosed within a toasted orange-blossom brioche with a hint of Grand Marnier—is the chef’s answer to the oohing and ahhing his cronut inspired. “The magic part is that it never collapses,” he explained at Opening Cermony’s BTW, or By The , event at SuperPier, where he debuted his creation at 4 p.m.

So, on the (platform) heels of the Hervé Léger by Max Azria show at 3 p.m.—and the diet that bandage-style everything inspires—we headed down to the Meatpacking District. At 3:55 p.m., there was no line. But 4 p.m. was another story. Customers were invited to purchase the magic soufflé as well as a couple of other confections, like the DKA (or Dominque’s Kouign Amann) and the Cannelé de Bordeaux.

But to buy the cronut, the crowd of the “in the know” foodies were each asked to draw one of six cards at the register—if you drew the joker, you were offered the opportunity (nay, the privilege) of spending $5 on a piece of pure Instagram gold. We’re no mathematician but the line was one sixth the length of the line on Spring Street and, so, maybe Emma Roberts would have appreciated the odds?

“I think he’s just so innovative and fun and we obviously really support new artists and creators,” Heather Neuburger, the runway model-tall visual director at Opening Ceremony, told us. (As an aside, she admitted to us that she’d never tasted a cronut.) “We always want to work with people, like him, who are really thinking outside of the box.”

But, come on. Isn’t starvation more synonymous with Fashion Week than sweets? “I don’t own much fashion,” Mr. Ansel told us as he crafted a star of confectioners sugar atop a magic soufflé, “but I think beauty in pastry is related to fashion.”

The queuing continued, after having been started by a lanky woman who could have passed for an aspiring model, if not a convincingly hungry one. She was dressed in a floppy hat and a shirt that read “Carte Blanche” as she forged her way to the front. Vendors from pop-up shops like DKNY and Rihanna for River Island admired the frenzy, but the fashionistas maintained their distance from the foodies at front and center.

Eying the pastry, in its chocolate-y oozing glory, we asked the chef about Kate Moss and about whether or not there are things that taste as good as skinny feels. His response? “Look at me. Look how skinny I am!” Touché, Mr. Ansel. Touché.

As we dashed onward and Uptown-ward, we were forced to forgo a taste of the magic soufflé, but we did add a fox fur snap bracelet from Opening Ceremony to our wish lists—a less fattening but more expensive treat. 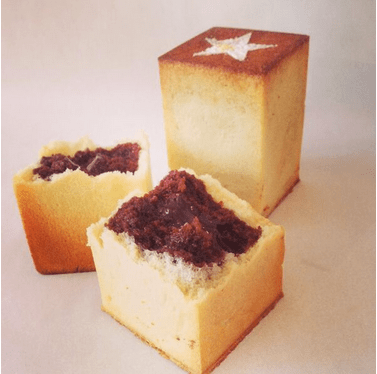