NEWARK – An animated defense team got a crack at the prosecution’s star witness today in the federal hacking trial of West New York Mayor Felix Roque.

“Were you hoping the FBI was going to trust you?” Azzarello asked the man who wore the wire that tripped up the attorney’s client.

Not a native English speaker, Munoz on the witness stand appeared confused. “What do you mean?”

Azzarello flailed arms of sheer incredulity in the direction of the Jury.

“I never hid anything from the FBI,” Munoz said. “It’s my Constitutional right as an American citzen to set up a website criticizing the government. The FBI doesn’t care about politics.”

“You’re a filter for the FBI?” Azzarello demanded. “You decided what was important for the FBI to know?”

Two FBI agents who worked with Munoz to bag Roque sat in the front row of the federal courtroom.

But some of the best-known names in Hudson County were also on display in this trial, if not physically present.

Prosecutors last week played an FBI tape of Roque personally quizzing Munoz about his part in setting up websites against him, including http://www.RecallRoque.com. They have evidence that shows Roque’s son, Joseph, hacked into Munoz’s accounts and shut down the opposition site, a federal crime.

Roque and his son sat side by side in the courtroom throughout their rival’s testimony.

McDonald spent all morning trying to paint Munoz as a Hudson hack whose past noble dedication to overthrowing the machine (runs for commissioner and Assembly a decade ago as a Republican and independent) ended when the Hudson County Democratic Organization made him a District 7 freeholder, gave him a part-time job as buildings inspector for the North Bergen School System, employed his then-girlfriend, and kicked in a government car.

“You got a car for 20 blocks?” the attorney asked in bewilderment.

Munoz admitted on the stand that he couldn’t pay the taxes under incumbent Mayor Silverio “Sal” Vega, the man the anti-establishment Roque beat to become mayor in 2010.

“Even though you couldn’t pay your taxes, you supported the mayor, didn’t you?” said the attorney, looking to flesh out the depiction of Munoz as someone who did what he was told by the Sacco-Menendez-Sires superstructure.

“Yes,” the freeholder said, in response to the question.

Munoz had taken moves to set up a dedicated anonymous cyber-opposition to Roque even before the mayor-elect took office after Vega’s defeat.

McDonald repeatedly strove to get the jury to see Munoz as two-faced, someone who agreed to have Roque swear him in and hug him for the flashbulbs even as he was stoking the flames of rebellion as his online creation, Maria Pasquale.

“You asked Felix Roque to hold the Bible, didn’t you?” McDonald asked.

McDonald simultaneously tried to get jurors to see Roque as a trusting friend of the plotting freeholder’s, and a true public servant who lived up to his own word to show government austerity when he refused his public paycheck as mayor and refused a car.

McDonald described an episode from August 2011, when Stack barked at Munoz on the street during the Ecuadorian Parade and told him he didn’t want to be seen with him in public.

Roque broke up the near fracas, McDonald said, and told Munoz the freeholder could march with him.

Toward the end of his cross-examination, McDonald flashed a sign on-screen that read: “Recall Felix Roque, Elect Jose Munoz Mayor,” and charged Munoz with secretly cultivating his own designs on ejecting Roque and replacing him in City Hall.

Throughout, Munoz said he had no ambition to be mayor, and now as McDonald forced him to look at the campaign poster projected on a large screen, the freeholder insisted he had nothing to do with the poster. “I only saw this in one location,” he said. “Someone put them around. This is not me. It’s illegal in West New York to put signs on poles. The mayor does it all the time because he’s the mayor, but it’s illegal. I didn’t put it there.”

“But you didn’t take it down,” McDonald shot back.

Munoz said again he had no ambition to be mayor.

Azzarello suggested Munoz was trying to topple Roque to ingratiate himself with the power base the mayor had bucked when he beat Vega against the odds in 2010.

“Was the Democratic Party dancing in the streets when he (Roque) endorsed Kyrillos? They were angry, right? They were upset? It was a bad thing – Mayor Roque endorsing Senator Kyrillos?”

“They have all these rules I don’t agree with,” he said.

“Do you set up a secret website when you disagree with them?” Azzarello asked. 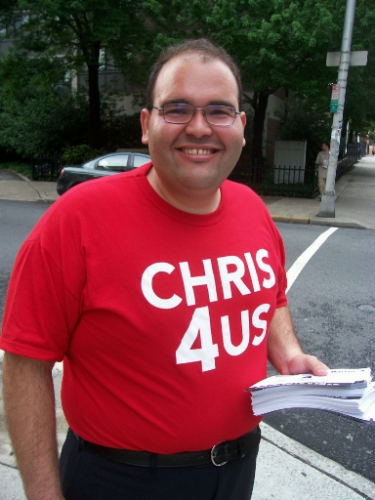