An army of photographers at Fashion Week

There is no shortage of commentary and coverage on the most-covered weeklong event in New York.

The Times’s style section has been posting updates throughout the days with Fashion Week coverage (including a selection of highlights from its reporters’ social media feeds). The New York Post covers each show in real time. The Daily News has a live blog, sponsored by Macy’s, where reporters post snapshots, videos and tweets (editors even got a tween blogger a la Tavi Gevinson to contribute). BuzzFeed has steady dispatches from the front. And, of course, fresh print editions of fashion trades The Daily Front Row and Women’s Wear Daily are handed out each day.

It seems that no publication can afford not to have a presence at the weeklong trade show.

Everyone is tweeting and blogging it themselves, mostly enthusiastically. (“Look at this swag!” “Check out this show!”) To read the breathless reports, it makes the week seem like one glamorous madcap whirl. But in private, the same reporters complain and talk about covering Fashion Week like a tour of army duty.

“This season in the tents was the most miserable thing I’ve seen in nearly a decade of covering Fashion Week,” said a veteran reporter. “Between the tacky sponsorships, third rate bloggers and C-list celebs crowding the shows and gaping tourists blocking the courtyard, it felt like a Times Square countdown that lasted all week and ended without a ball drop.”

“It’s a lot of hurry up and wait,” Jenni Avins, who is covering Fashion Week for The Cut, said. “The tension levels are really high.” When we reached Ms. Avins, she was rushing to file from a Wi-Fi-enabled café near Lincoln Center.

A beauty editor described the grind thus: “First, you have to shove your way past girls who think that having a Tumblr makes them a celebrity. Then you have to push through a crowd to get a decent glimpse of a show that lasts about five minutes and try to come up with something to say that isn’t just ‘Pretty dress!’ Plus, you’re away from your desk all day, there’s nowhere to plug in your laptop, and you don’t get any actual work done,” she said.

“Fashion Week is like being backstage at a high school musical,” she continued. “I realized pretty quickly after covering my first NYFW that I could get better pictures from Getty than I could from my iPhone without having to go across town, fight for a cab or be away from my desk for three hours.”

Meanwhile, the number of fashion bloggers seems to grow with every Fashion Week. Apparently, there is nothing more exciting than proximity to glamour—even if one must wait outside like fanboys and fangirls to catch a glimpse.

On Monday, as Off the Record stood outside the tail end of the Carolina Herrera show, an army of photographers indiscriminately snapped shots of editors and bloggers leaving the show. The Times’s Bill Cunningham stood, in his trademark blue smock, photographing the notable names among the attendees. But many bloggers didn’t have Mr. Cunningham’s discerning eye. Cindy Adams walked by, unnoticed. Even Anna Wintour, in her dark sunglasses and Louboutins, chatted with a friend, largely undetected by the throng of would-be paparazzi. After the Herrera-goers had filed out, we boarded a chartered bus along with a pair of fast-talking Italians to take us to the Tommy Hilfiger show on Pier 94. There, we watched models in pastel neoprene parade down a runway disguised as a boardwalk that threaded past fake sand dunes. Just one week earlier, we couldn’t help note wistfully, many people in the audience had been at actual beaches, getting in one last Labor Day swim.

Cosmopolitan Editor in Chief Joanna Coles watched from the front row. From behind her dark sunglasses, it was difficult to read her expression but not impossible to know what she was thinking, as she tweeted throughout the show.

“Huzzah, Summer isn’t over @TommyHilfiger they’ve imported the beach and boardwalk #NYFW @Cosmopolitan,” Ms. Coles tweeted. “Hail to the midriff #Tommyspring14 let’s have a special workout routine @Cosmopolitan so we can wear this,” Ms. Coles wrote moments later. She also noted that the wedge sneaker was still popular. All of her tweets from the show were accompanied by Twitpics. And she wasn’t the only one tweeting.

Later that day, we made it back to the main tent to watch Concept Korea, which featured multiple Korean designers. The lights dimmed before each new collection, which just made the glow of cellphones that much brighter.

A woman seated next to us used Instagram video to capture each show in 15-second intervals. Behind us, two men used iPads to record the entire experience. We asked the Instagram videographer whom the footage was for. She was hoping to submit it to The Examiner. We heard that many times over the course of the day.

In the Lincoln Center tent, which is a carnival of promotions (Sweet ‘N Low Cosmo, anyone?), Papyrus, the stationery company, gave out cards and pens to get people to write to their friends and tell them about the shows. “I’m reporting from Fashion Week,” we saw someone scrawl on a custom-designed card before putting the envelope into clear box, which the stationery company offered to send “anywhere in the world.”

Almost anyone could have written that line. Who wasn’t reporting from Fashion Week? 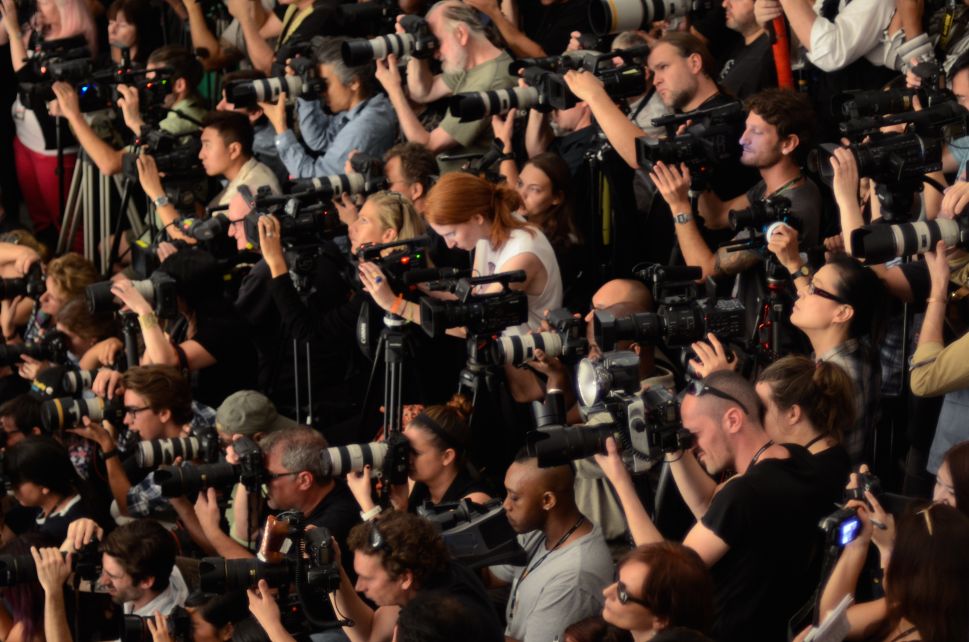