Cajoler of contrast, summoner of intergalactic flavor commentary, banker of the long shot, Canada ditcher—there are many ways to describe Daniel Burns, the fair-haired chef and co-owner of Luksus, a 26-seat tasting-menu-only restaurant in the backroom of a beer bar in Greenpoint. The most germane and exciting way, however, is as a new thinker. Mr. Burns is a thinker of new thoughts, a taster of new tastes. And his vision? It is the new vision. He is the new seer.

It’s important, you know, the new. Look back on your days to what yawns before you: the repeating patterns of muddy office carpet, the same subway Tetris game played by sweaty human blocks, the endless emotional umami of pain and pleasure, plants that need watering, bills that need paying. Careful now, sweetheart, life zoomed by you like a telephone wire seen from the backseat of a speeding car. Sag, sag, sag, post. Sag, sag, sag, post. Sag.

Even worse is that even novelty gets old. The next cronut will be just like the last. Another restaurant with an ampersand will open downtown. Another steak & sushi feeding trough for hegemons will appear on the Upper East. Another day, another tattooed chef. Ramps, pork belly, heritage something. Flip the calendar page. Maybe next month’s beauty will be better. Nah, just old tits and the grid of days.

So when something new, truly new, comes along, it’s exciting. Luksus, to me, is that new thing.

For starters, the restaurant, whose name means luxury in Danish, is located in the back of what is certainly the most imaginative beer bar in the United States. The bar, called Tørst, is co-owned by Mr. Burns and a heavily bearded former hair model-cum-legendary gypsy brewer named Jeppe Jarnit-Bjergsø, who runs the nomadic experimental brewery Evil Twin in his spare time.

Mssrs. Jarnit-Bjergsø and Burns are partners, not just in the brotherhood of beards, but in their affinity for gleeful chaotic disruption. The mischievousness of Mr. Jarnit-Bjergsø—whose personal beer collection is worth many thousands of dollars, is housed in the basement of Tørst and includes one of the world’s most expensive beers, The End of History, which is named after Francis Fukuyama’s essay and comes inside a dead squirrel—is cloaked in Danish gloom; Mr. Burns’s in Nova Scotian modesty. But don’t let that fool you. Mr. Burns’s résumé is terrifying. It includes stints at the best kitchens in the world, years at The Fat Duck and Noma and, most recently, as the head of the Momofuku Test Kitchen. His style is impetuous. His technique is impregnable. And he’s just ferocious. He wants to feed your children. Praise be to Allah!

Working my way back through Tørst, which is kinda empty at 8:45 p.m. on a Thursday, I slide open the portal hobbit-hole door and enter Luksus. The light is warm and soft, the space is contained—a few tables and a marble bar behind which Mr. Burns and two others chefs work. The room feels both shire-like and nautical. It’s full of life and flannel, of chatter and Outkast’s Stankonia, which makes it both smaller and better still.

Sit at the bar to better watch Mr. Burns, a soft but focused presence, and to better see the food, which is poorly illumined in the room’s low light, leaving GQ’s Alan Richman to shine a penlight like a dentist examining an abscess.

Dinner ($75/ $45 pairings) starts with a trio of snacks. The first, cipollini onion and buttermilk, is a quiet homage to Outback’s Blooming Onion but shrunk down to mortal size. The buttermilk, dotted with chives, is made with yogurt and cream. When you get down to it, it’s ranch, but a really tremendous ranch. It’s good but just soft entry for the next course: chicken oysters and cabbage.

No, I didn’t forget the comma. The chicken oyster, so rare a treat one wonders what the fuck it is, is two little morsels chickens have by their hips. It’s often overlooked, though the French call the part the sot-l’y-laisse, meaning “only fools leave it on.” Mr. Burns marinates his in a teriyaki glaze before quickly roasting them in a crazy hot skillet. He places the now-tender, slightly slimy but still crispy morsels on a punched-out perfect circle of braised cabbage and accompanies them with heavily roasted eggplant. Lift it from its wooden plank, form a tender green envelope out of the cabbage, and eat. The vegetal cabbage, the char of the chicken, the sweetness of teriyaki, the unexpected smokiness of the eggplant—it’s a yakitori taco, loco and totally like something, some Ssam, you’ve seen before. But also not. Like many of the dishes Mr. Burns churns out, I’d like to call it an Occam’s Dish, meaning it’s parsimonious and elegant. There’s nothing extraneous, no jawing or pretension.

A few snacks later—after the lobster and mango relish with hazelnut foam served with Scottish oat cake—is the the beef tartare. How, you wonder, can raw beef be one of Luksus’s greatest triumphs? That must be a neg, you think. But no. These two dishes—the beef tartare and the gem lettuce that follows it—might seem simple, but the pleasure they give is both complex and profound.

For the tartare, Mr. Burns scrapes Painted Hills tenderloin with an extremely sharp knife. The result is a thick shag carpet of beef—beef shag carpet!—on top of which he places a series of interesting and unexpected ingredients: black trumpet puree, small pickled ramp capers, the flowers of fennel and coriander, sliced sungold tomatoes and two peppers, a sishito and padron, fried. On top: a caramelized onion chip, made with chicken stock, caramelized onions and tapioca pearls, pureed, dehydrated and fried to a crisp, dusted with vinegar and sugar powder. It’s a technique Mr. Burns developed at Momofuku, his thesis from his years there. Again, the interplay of flavors, as balanced as a Calder mobile, shift between savory and sweet, vegetal and meaty.

The next course, the little gem lettuce, has been said to wilt under the weight of the stately pace of the tasting menu. It is said to be neither strong nor complex enough to hold the diner’s attention as the evening stretches into the wee hours and the beers take their toll on analytic faculties. I couldn’t disagree more. There are only four elements to this dish: lettuce, egg, mushroom and corn. The lettuce is roasted in a very hot pan, plated on a touch of watercress and romaine puree. The egg, cooked at 62.5 C for 55 minutes, a technique Mr. Burns learned from Mugaritz’s Andoni Luis Aduriz, is only the yolk, nestled beside the lettuce. The chanterelles are roasted and sit on a tiny mound of pureed oyster mushrooms. The broth is clear and corny. As you eat, the egg will dissolve into the broth, turning the consommé from clear to cloudy, and the purees will dissolve, turning the broth even thicker.

For me, the biggest gift Luksus offers is that Mr. Burns always makes it worthwhile to look, to do to the work of seeing. He is the model for this: He sees not the ramp, but its caper; not the fennel, but its flower. We saw a chicken, and he saw an oyster. It makes you want to peer at everything differently, to spill out onto Manhattan Avenue and look at the storefronts with new eyes, to walk down the stairs and gaze drunkenly in the mirror, happy not to see the same old face. Your features will be unchanged, but I bet you’ll be smiling. 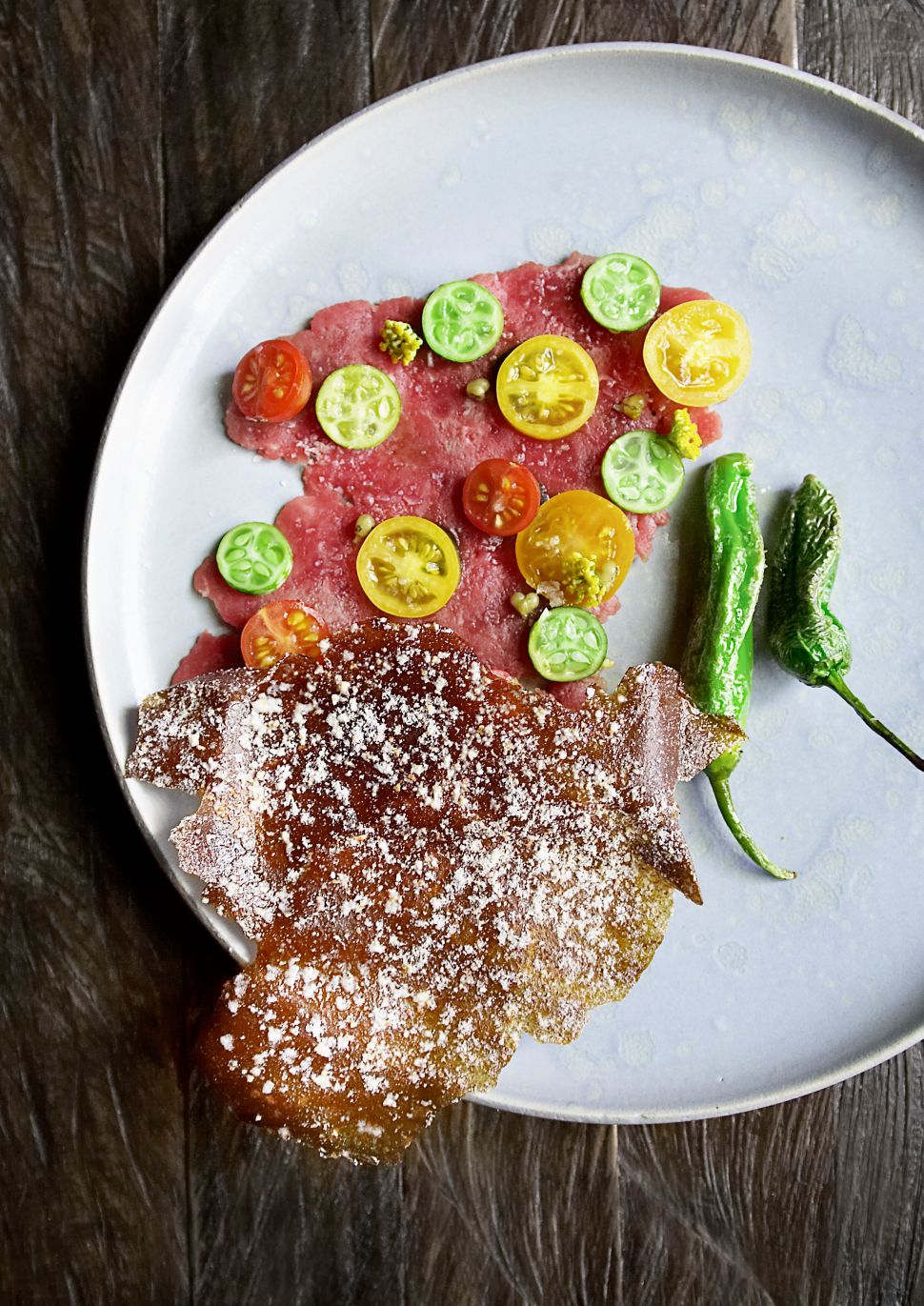