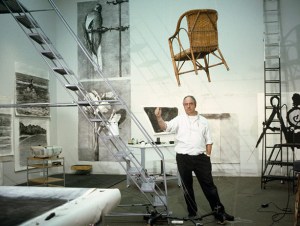 Easily the best known South African artist working today, William Kentridge is once again having a moment in New York.

Fans may recall the flurry of Kentridge activity a few years ago, when Marian Goodman Gallery staged a solo exhibition of his drawings and film that came on the heels of his 2010 production of Dmitri Shostakovich’s The Nose at the Metropolitan Opera. This month is bound to induce a bit of déjà vu as Goodman presents another Kentridge show opening on Sept. 17 and The Nose returns to the Met on Sept. 28. If one feels even the least bit shaky on Mr. Kentridge’s work, a PBS documentary entitled William Kentridge: Anything is Possible (2010) is screening tomorrow night at BAM, followed by a Q&A with the Johannesburg-based artist. The Peabody Award-winning film, which follows Mr. Kentridge’s preparations for The Nose, was directed by Susan Sollins, the executive director of Art21, and filmmaker Charles Atlas. The one-night-only screening will take place at 7 p.m.

Looking ahead, the Goodman exhibition, “Second-hand Reading,” will feature ink drawings on book pages, flip-book films and their drawings, moving sculptures and linocut prints. The work, according to Mr. Kentridge’s statement in the news release, is about “taking sense and deconstructing it, taking nonsense and seeing if sense can be constructed from it… This leads to the question of mistranslation, and the pressure that imperfect understanding gives to the act of imagination.”

This deconstruction of sense fuels the wonderfully bizarre plot of The Nose, in which a man finds a stray nose and temporarily loses his, pursuing it all over St. Petersburg. The final performance on Oct. 26 will be broadcast back at the BAM Rose Cinema, bringing this busy month of Kentridge events full circle.

Update, Sept. 16: There is, it turns out, yet another Kentridge show to investigate. David Krut Projects, which has published more than 200 editions by the artist, is currently exhibiting work by the artist in “William Kentridge Prints, 1992-2013: Published by David Krut,” including 30 prints created in preparation for The Nose. The show will run through Nov. 9 at 525 West 26th Street.