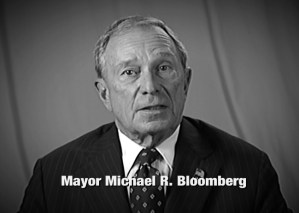 Last night Marco Brambilla debuted Anthropocene, a video and performance piece distilling the lifestyle disparity of the haves and have-nots in the Bloomberg years of New York City, wryly disguised as a video to promote the new Hugo Boss flagship store in the Time Warner Center.

The performance element coalesced around yesterday evening’s party for the video, whose invitation must be considered part of the overall piece for its line “black tie optional.” In Bloomberg’s New York, it seemed to say, when is it not? Shortly after everyone arrived, the crowd, which sipped drinks like “vodka/water on the rocks” in the store, headed out to the third-floor mezzanine area to watch the Brambilla videos on three massive screens that literally looked down on the street-level shoppers, who scurried to Whole Foods after work.

The attendees had been meticulously curated, so much so that some gossip sites did cover the piece as though it was a real party—this despite the fact that some attendees had cheekily worn tuxedos, a nod to the invite. There was Liam Hemsworth, Marina Abramovic, a not-famous actor from the Transformers movies and even Woody Allen (whose presence almost would have been over-the-top had his latest output, Blue Jasmine, not been so of a piece with the evening’s performance, with its protagonist a Ruth Madoff surrogate).

And then it appeared, 30 feet tall: the head of New York’s actual, outgoing mayor, Michael R. Bloomberg, which proclaimed itself to be “delighted” to welcome the social sculpture to the event. After a jump cut in the grainy black-and-white footage (eerily reminiscent of a hostage ransom video), Mr. Bloomberg babbled with watery eyes and admirable deadpan that “public art adds zest to what is already the worlds’ most exciting city.” In a meta-critique, he thanked the Public Art Fund for financing the display along with Hugo Boss, but the polite words did nothing to assuage his elegiac tone. His message was then repeated for a Big Brother-addressing-the-proles effect (“technical difficulties,” in the language of the fiction’s organizers). Astounding. You had to be there.

The part of the performance billed as the actual film offered a video game-like zooming through the paths of Central Park, in bright new-iPhone colors to the strains of Christopher Cerrone’s adaptation of Camille Saint-Saëns’s Carnival of the Animals, performed by Julliard Students up on the third floor. Everything is fine, it seemed to say, even though black and white buildings loom everywhere. Look you’ve got that park there. That’s pretty nice, isn’t it? And even if you live an hour away from it, you’ll always have the consolations of the virtual.

The paths of the park all led like veins to a CGI representation of Columbus Circle, which pulsed like a heart. It would be absurd to suggest, of course, that this nexus of CNN, an international hotel and a shopping mall like the Time Warner Center could be vital to the health of the city (just as it would be absurd to think of parks as a purely good thing in this city, dominated as they were for so many years by that general of class warfare, Robert Moses), but then this was the point of the piece. In the Bloombergite view, they are. These people actually did think of themselves as the Christopher Columbuses of the modern era, and even want to build another such commerce center at the base of the Williamsburg Bridge. What a strange, embarrassing time it’s been. “Bring on the Sandinistas,” growled someone next to me.

After the video finished the performance artists filed out of the Time Warner Center and headed to a celebratory dinner at a house around the the block to which I had not been invited.