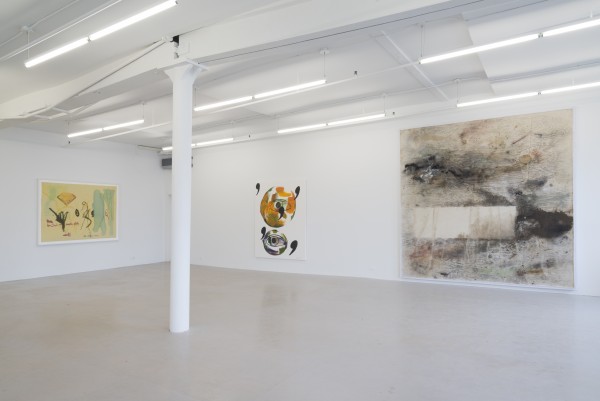 Dealer and art critic David Lewis, who previously partnered with Parisian outfit Balice Hertling on a short-lived Hell’s Kitchen gallery that closed earlier this year, is coming fast out of the gate with this group show, which inaugurates his roomy new space on the Lower East Side. It brings together work by nine artists and one duo, many of whom are promising, increasingly active internationally and too little seen in New York. (Mr. Lewis now represents six of them.) It’s heavy on paintings that are eager to please but not quite willing to pander.

Greg Parma Smith serves up a delectable piece with canvas rolled up in two places to reveal at least three separate paintings of perfectly questionable taste: a pleasant cartoon double portrait, a gold snake on white and a trippy psyched-out abstraction. Will Benedict has embedded a peachy abstract painting alongside a photo of a haughty-looking man in a red sweater, as if we’re looking at some bizarre television newscast. Paintings are behaving oddly in our current, screen-filled era, and the show makes that point perhaps most memorably in a roughly 10-foot-square slice of canvas that Lucy Dodd has stained with a full ecosystem worth of material: moose poop, mango, charcoal, volcanic ash and cayenne, among other things. It’s messy but nuanced, bewitchingly ethereal but steeped in a sturdy, earthy humor. Elsewhere, a dandyish mode prevails in breezy, cartoony figurative paintings by Charles Mayton and Viola Yeşiltaç and breezy, scrappy abstractions by Israel Lund and Aubrey Mayer that are all thoroughly of the moment if not particularly memorable on their own. (Bring on the solo shows.)

Rounding out the bunch are some impressive (and slightly obscene) body-part-filled ceramics by Nicolás Guagnini and two photos. Dawn Kasper’s shows the sort of tenuous construction she sometimes integrates into her performances. Calla Henkel and Max Pitegoff’s is a toss-off snapshot of a dirty plate in Miami, a souvenir—or a war memento?—from the art-world circuit that Mr. Lewis and these artists are now navigating. (Through Nov. 17)