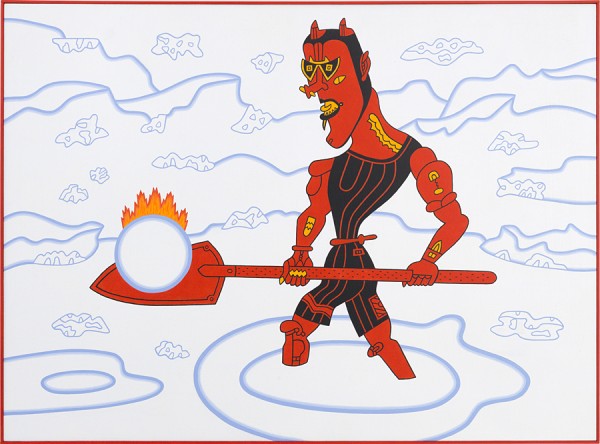 A few years ago, the Chelsea art dealer Derek Eller and the publisher and curator Dan Nadel were discussing artists they loved when they landed on the name Karl Wirsum, a storied Chicago figure known for cartoon-like drawings and paintings. Mr. Wirsum had been making work for almost half a century and showed regularly in the Windy City, but he hadn’t had a New York exhibition in two decades. “How come we never see Karl Wirsum shows in New York?” they recall thinking.

And so they paid him a visit at his Chicago studio. “One day, I asked him if he had any sketchbooks,” Mr. Nadel told The Observer in early October, “and he started pulling out these mountains of books that had these incredible drawings in them.” They were filled with sketches for illustrations he did for Playboy and portraits of women and animals that mixed dashes of ancient and non-Western cultures, insects, vintage toys and Americana of every kind. Wild stuff. “With most people, you wouldn’t hide them away in sketchbooks,” Mr. Nadel laughed.

Messrs. Nadel and Eller decided to curate a show of those drawings, dating from 1967 to 1970, at Derek Eller Gallery in 2010. It did well. Mr. Eller kept in touch, and, one weekday afternoon earlier this month, Mr. Wirsum was back at the gallery, watching as a batch of his most recent paintings—intensely bright alien figures in semi-abstract landscapes—were being unwrapped. It’s his first show of new work here in 25 years. 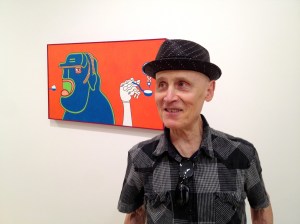 Mr. Wirsum is bald and short, but he works out regularly and eats well, so he has a sturdy, wiry presence. When I met him, he was wearing a wristwatch with a face of a cartoon dog that he made for a Playboy Enterprises project years ago. He had just turned 74 and recently paid his traditional birthday trip to a Chicago flea market. “I got this little cutout tin man who had a saxophone that he was playing,” he said. “It was a two-parter that you open up, and there’s a mirror in it.” He keeps toys like that around his home, where they inspire the odd angles and shapes of the figures he draws.

The show arrives just as New York, and the art world, is finally embracing comic art, so-called outsider art, and the sort of outré graphic work that Mr. Wirsum and many of his colleagues among the Chicago Imagists have been honing for years. Last year, the Whitney including Mr. Wirsum and some of his associates in its “Sinister Pop” show, and his compatriots have been having shows all over town: Jim Nutt has been showing at David Nolan, Art Green just opened his first New York painting show in more than 30 years at Chelsea’s Garth Greenan Gallery, and National Exemplar just showed a batch of Gladys Nilsson watercolors. Meanwhile, scores of young artists are taking cues from this work.

When Mr. Wirsum was a young artist just starting out, back in 1966, he joined up with five other artists—Messrs. Nutt and Green, Ms. Nilsson, James Falconer and Suellen Rocca—and a curator named Don Baum to stage a show of their absurd, rambunctious, out-there art at a Chicago-area museum. They called it “Hairy Who,” a name that became attached to the group’s efforts and until very recently resounded far more strongly in comic circles than in the art world. (Mr. Wirsum was responsible for the moniker, asking aloud, after hearing everyone mock a pretentious local art critic throughout their first meeting, “Harry Who?”) 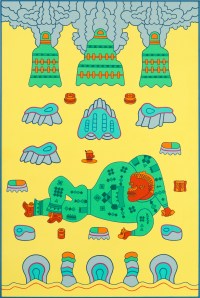 “The reason I love them, and part of the reason they’ve been out of fashion, is that it’s entirely it’s own language,” said Mr. Nadel, who published an oral history of the group ten years ago. “So much of contemporary art is about being in dialogue with what’s going on and responding and critiquing, etcetera. The thing that makes Karl so interesting is that he really speaks a private language, and you have to key into it. It’s also a figurative language, which is never that popular, and it’s a non-narrative world, so it’s even harder.” Add the fact that they were in Chicago, he said, and you pretty much have a recipe for something that high-art New York types were going to have a hard time embracing. They had some major New York shows around 1970 (and Mr. Wirsum showed at the trailblazing Phyllis Kind Gallery, which handled outsider art in New York and Chicago, through 1994) but the group never quite broke through to the mainstream.

Mr. Wirsum seemed uninterested in discussing the Who’s current New York moment. He’s humble and introverted, and slyly funny in the way that introverts can be. He’s used to being a bit on the outside and seems comfortable there. The son of German emigrants, he was raised in Chicago and was obsessed with newspaper strips from a young age, especially Dick Tracy and Batman, which “had these kind of weird, extreme criminals,” he said. “It was that type of thing of, ‘whoa,’ going off the border of someone’s reality.” His father, a machinist, studied commercial art and would draw him little cartoons. His mother was an art lover and took him to drawing classes. They were both killed in a car crash when he was 9. Karl, riding along with them, became an orphan.

He attended the School of the Art Institute of Chicago in the early 1960s, when Abstract Expressionism was all the rage. “You could guess what a person’s paintings would look like based on who their instructors were,” he said. His idiosyncratic figurative work was opposed to all that. “I took some night painting courses, because the night painting instructors were a little more free and didn’t have that strict attention to a certain kind of art.” 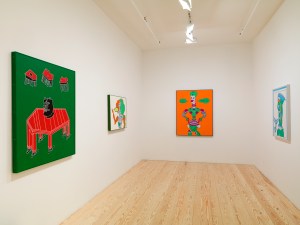 He found likeminded friends, like Ed Paschke (1939–2004), best known for toxic-colored figurative paintings and the fact that he employed as an assistant a young Jeff Koons. (Mr. Wirsum had Mr. Koons as a student at SAIC, where he continues to teach, suggesting that one might find a fruitful dissertation in the Imagists’ influence on the superstar.)

After graduation, the two friends set off for a vacation in Mexico City, and Mr. Wirsum ended up staying for about half a year. “What I liked about it was that their art was everywhere,” he recalled. “You know, on their buses and all the different festivals—all different kinds of art—and then their ancient artwork was there as well.”

That amalgam of sources has animated his own art for his entire career and is particularly evident in his new paintings, which take in images high and low, from museum collections and carnivals. In the beautifully colored Uh-Oh! Missed the Last Armadillo Outta Here (2013), an alien-headed man in a green outfit, patterned with what could be Aztec designs, reclines in the middle of a desert the color of a whisked egg yolk. Around him are cartoon mesas and puffing volcanoes that look like retro sci-fi power plants.

“This took me forever to finish, because there were a number of different design options for this mountain situation, different placements of the fragments around the figure,” Mr. Wirsum said. He typically makes scores of drawings for one painting, sometimes over the course of many years, so that when he paints it’s a matter of transferring his work to canvas or board, carefully applying layers and layers of color, punching up the color to a shocking intensity. 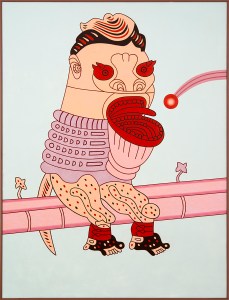 ‘Your Call Cannonball,’ 2011. (Courtesy the artist and Derek Eller Gallery)

He pointed around the painting, decoding it. “This is a half a grapefruit, this a root-beer situation here, and then this is a glass of water, and this is a bag of peanuts there—just the bag, you don’t see the peanuts.” The ostensibly ebullient, vibrant scene shows a man wasting away in the desert, seeing mirages.

The inspiration for that figure, who appears in a number of Mr. Wirsum’s new works, is Winslow Homer’s 1899 painting The Gulf Stream, which hangs at the Art Institute. “It’s a castaway on the boat that has the mast broken, and he’s just lying on the deck, and all these sharks are floating around him,” Mr. Wirsum said. “And he’s just laying there very relaxed, sort of resolved to his end.”

He looks at photos of old circuses and sideshows for banners advertising freaks and geeks, magazine spreads and those vintage toys, which he plays with and abstracts as he draws. His voluminous sketchbooks have countless variations of things like hands and feet. “I have always thought of my art is archaeological,” he told me. “I go dig for my own sources in a way within my own work.”

Mr. Wirsum pointed to a piece that depicted the blue torso of a man, seen in profile, being presented with two spoons. “It’s kind of a weird self-portrait thing,” he said. As an orphan, he continued, he was drawn to Huckleberry Finn and Oliver Twist. “I think of myself now still as an orphaned old codger, and still I’m eating oatmeal in the morning.” 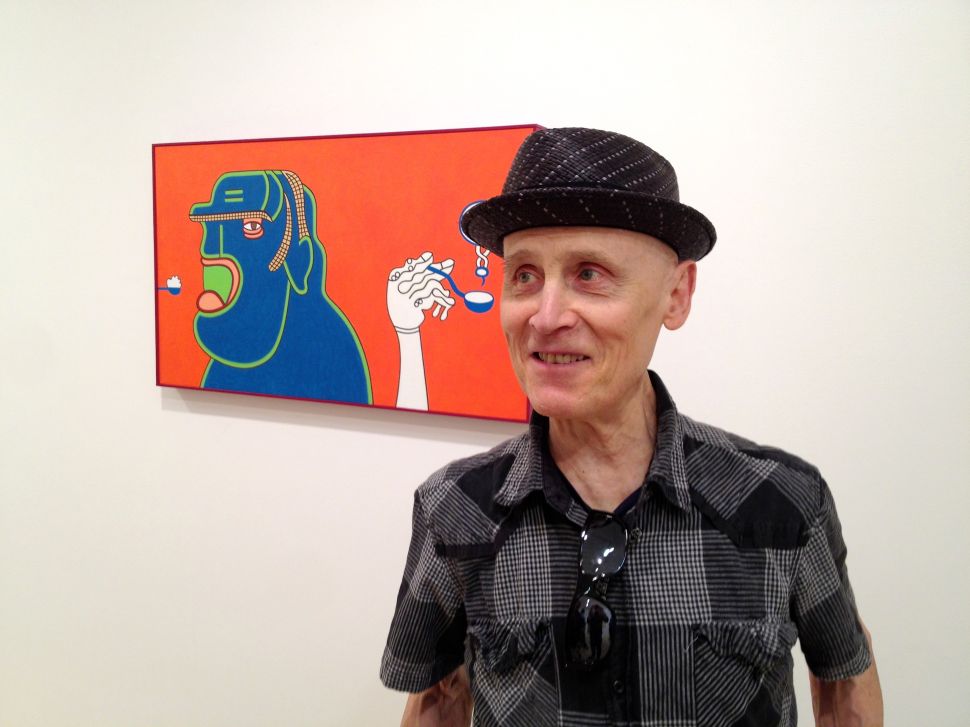