Atlantic County Republicans are calling on a Democratic freeholder challenger to drop campaign tactics they say have never before been witnessed in county politics.

The Atlantic County Republican Committee issued an open letter to freeholder hopeful Bard Shober demanding that the Democratic challenger and his party put an end to posting signs in the county they describe as “truly over the top and beyond the realm of propriety.”

The statement comes after signs began popping up in the county that, well, drop the “F bomb.” Or, sort of.

The sign that struck a cord with local Republicans reads: “WTF” or, “What This Fixed?”

The letters “WTF” of the words “Want This Fixed?” were in reference to the state’s minimum wage rate.

“Please clean up your campaign, stick to the issues and take down your vulgar signs,” wrote Davis, who accused the Democratic hopeful of bringing a level of “juvenility” into the local races.

But in a statement released by the candidate the same day Davis issued his letter, Shober double downed on the campaign tactics and declared “bold signs inject life into otherwise boring” elections.

“The number one question I hear is, ‘What is a freeholder anyway?’ Rather than just put a name on a sign, we decided it was time that the voters knew not just what a freeholder does, but the important issues that are made by county government,” Shober said. “The signs raise awareness about the direct impact the freeholder board has on the day-to-day lives of every resident in Atlantic County.”

And Shober isn’t just enthusiastic about the sign in particular that caught the ire of Atlantic Republicans.

There are other signs posted within the county that he says spurred the local officials to take action to meet residents’ needs, including finally paving a road following 13 years of no action after signs were posted that read “This Road Sucks,” Shober said.

“Just days after the signs were put up on Tilton Road the county government announced that, after 13 years of getting the job done, Tilton Road will finally be paved in the next few weeks,” he said. 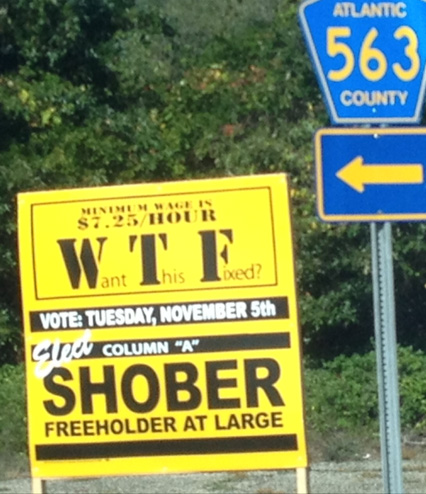