NEWARK – Almost four years ago today, Chris Christie strode tired but tall into Newark’s Robert Treat School, a charter school inside the North Ward Center compound. It was the morning after his victory over Democratic Gov. Jon Corzine. Christie would later claim that he was surprised by the result. But Steve Adubato Sr., Newark’s ultimate political power broker, the center’s founder and the builder of the school, had one more surprise for the governor-elect.

“Show me the money!” they yelled out as one.

On Monday, Adubato had one more thing to show Christie and to another assembly, this time a bipartisan gathering of the most powerful politicos in New Jersey, as well as schoolchildren and citizens. It was a statue of Adubato, larger than life, dedicated in his honor, inscribed with the exact same message shouted out four years ago.

Eight days before Election Day with Republican Christie on the ballot and Adubato acolyte Joe DiVincenzo staunchly in support of the governor, the group gathered to watch Adubato’s moment in the bright fall sun – a testament to the continuing ability of the North Jersey Democrat to bring people together from both sides of the aisle. For the Republicans, State Senate Minority Leader Tom Kean Jr. and State Sen. Kevin O’Toole (R – Essex) were present. For the Democrats, U.S. Reps. Albio Sires (D – 8th C.D.) and Donald Payne (D – 10th C.D.) looked on, as well as former Gov. Jim McGreevey.

But it was New Jersey’s brightest political stars, along with another Newark native son, who stood out in the crowd, with remarks that were in many ways more personal than political.

“Everything you’ve done over the last 40 years in this place has been for kids like the ones sitting behind me. That’s always what’s motivated you,” said Gov. Chris Christie, who was born in Newark. “It reminds me so much of my own mom and the things that motivated her over the course of her life. I’ve looked to [Adubato and his wife Fran] as great reminders of my mom, a Newarker.”

“He is truly the most devilish angel of a guy that I’ve ever met,” Newark Mayor and U.S. Senator-elect Cory Booker said, looking directly at Adubato and referring to over four decades of tough tactics employed in the gladiator academy that is Newark politics. “I have never met anybody that finds a way to get things done, whatever the path may be, for other people. I’ve been thinking a lot about father figures over the last few weeks, and in many ways you have been that in my life. You are truly one of the first sons of Newark.”

Check PoltickerNJ.com later for more about Adubato and his impact on Newark and New Jersey politics. 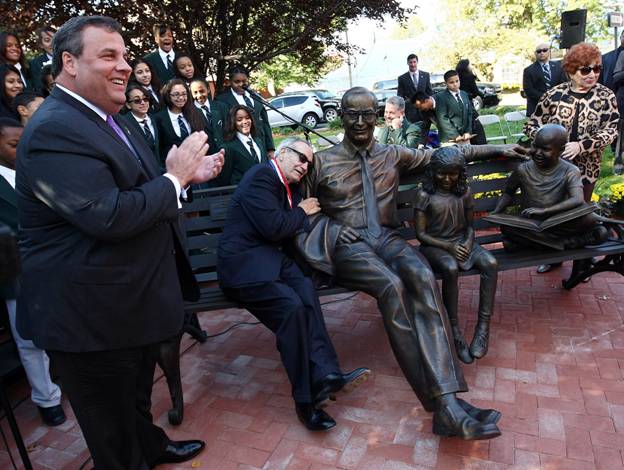