Operating out of the family-owned factory in Los Angeles, his cousin was set to produce the final pieces in Mr. Kim’s debut collection for RVN. After a year of preparations, evinced by the hundreds of images lining the designer’s sketchbook, today was the big day. But if Mr. Kim had prepared a sentimental speech, with the long-awaited bottle of Pommery close by, it would have to be put on hold.

“Ted, the print came out wrong,” his cousin said frenziedly over the phone. “I … it was the wrong yarn. I don’t know how it happened. We have to start over.”

Mr. Kim sped over to the factory. “Everything I had worked for seemed to shatter,” he says of that moment. “Upset? Yeah, you could say that.”

But when he jogged into the building, the misprinted clothing laid out before him, his mood soon shifted color. Though Mr. Kim was unaware then that one of the pieces on display—a pair of black-and-white jacquard leggings—would one day grace Beyoncé in an iconic Super Bowl photo, the potential was far from lost.

“I turned to him and said, ‘Wait, this is the most amazing thing I’ve seen in years,’” he remembers. “I guess you could say that I’ve built an empire on a mistake. God bless my cousin.”

Indeed, as RVN has grown in the last two years—from a fledgling idea to a brand featured within the famed windows of Saks Fifth Avenue—Mr. Kim owes his family more than just one nod. Though the designer has a definitive handle on the art of fashion (top roles at Donna Karan and Michael Kors are nothing to scoff at), it’s likely he would never have claimed this stature without one person: his little sister.

“He expects that the business side of things just happens to work out,” SooMi Kim says laughing. Seated in a Chelsea coffee shop, donning the label’s signature jacquard mini skirt, she speaks candidly about her brother as a business partner—a sheer creative genius, she says, but entirely oblivious to the “real world” facets of a fashion house.

“I try not to talk about money with Ted,” she continues. “He doesn’t realize all of what goes on in the background—operationally, financially, everything. Meanwhile, I’m sorting through hundreds of sales emails, but he doesn’t know any of that.”

In many ways, Ms. Kim might be said to be the true puppet master behind RVN—between monitoring operations in both L.A. and New York, coordinating sales and managing contracts with buyers, her work weeks are nonstop (“one week was 95 hours,” she notes).

It seems a tall order but for Ms. Kim a welcome one. Having lived with her brother the past 12 years, she confesses that she knows him better than he knows himself, making the characteristically hectic world of fashion slightly more manageable. “I could write a book on Ted,” she says.

“I just follow her orders,” her brother says without hesitation. “I’m good at what I do, but I suck at everything else. Thank God for my sister.”

Ms. Kim looks hard-pressed to disagree. “Yeah, I love my brother, but there’s no common sense there. He’s a great designer—I just let him stick to that.”

Despite not understanding how to use a credit card, Mr. Kim has still managed to navigate the globe’s top fashion houses with ease.

Journeying to California from a small peach farm in South Korea at age 16, he initially looked to hone his skills in the field of car and transportation design. A few months later, however, while skimming TV channels in his dorm, he stumbled upon a Donna Karan fashion show, “and the rest is history,” he declares.

Mere months later, he found himself some 3,000 miles east at Parsons The New School for Design.

“That’s when I fell in love with New York,” he remembers. “I told myself I’d never leave.”

After graduating from Parsons, Mr. Kim’s career took on a swift trajectory. His original fashion muse, Donna Karan, whom he still refers to as his “design mother,” immediately snatched him up for a four-year stint at the mega-brand. His experiences there, including working with world-class pattern makers at Dior and Yohji Yamamoto, would serve him well, as he parlayed them into eight years at Michael Kors and three at Anne Klein.

During the discussion on his background, he initially skips over any mention of Anne Klein. From 2008 to 2011, Mr. Kim served as the brand’s vice president of design.

“As much as people thought I had the dream job, I felt so stifled,” he confesses.

Despite his general unhappiness at the brand, Mr. Kim managed to dress one of fashion’s most coveted customers of the past five years—first lady Michelle Obama. Drawing from the Anne Klein aesthetic, it’s a career-building feat he entirely fails to note in our first interview.

“Honestly, it was a design he probably wasn’t proud of,” Shanya Fernando, director of marketing at Rachel Roy, speculates.

He later clarifies that dressing Queen O was one of his “most unforgettable fashion moments,” but his initial silence speaks volumes of another characteristic and perhaps his most predominant: a principled vision.

Even with a multitude of designer star roles, Ted Kim never quite identified his customer. But with the launching of his own line, immediately after his departure from Anne Klein, it’s clear he finally found her.

“Donna Karan is all about Donna,” he asserts. “The New York, powerful and successful Jewish lady. … Michael Kors caters to the jet-set lifestyle, Upper East Side women and wannabes.”

But the RVN girl, he asserts, is radically different. With a line centered on subdued animal prints, prism-like designs and even patterns inspired by The Great Gatsby, Mr. Kim hopes to appeal to a youthful, “edgy and risqué” subset of New York women. And at a price point standard for a Saks-deserving contemporary line (most dresses sit in the $325 to $400 range), he hopes to carve out an affordable niche, trumping competitors like Alexander McQueen’s McQ.

Based on a recent flurry of celebrity attention, it certainly seems possible. Kelly Clarkson, Eva Longoria and Kylie Jenner are among those who have recently flaunted RVN clothing on and off the red carpet.

As RVN continues to solidify its place in contemporary womenswear, fresh faces like Wynter Gordon and Shaun Ross are swiftly catching on. But if Mr. Kim is onto something great, it’s fair to say that—like all great things—it started with Beyoncé.

He remembers the encounter well.

“You’ll never guess who was just here,” a breathless voice over the phone exclaimed. “Yes, her. I’m shaking. … I don’t even know what to say. This is too much.”

On the other end of the line, Mr. Kim was equally at a loss. At first glance, it would seem a triumph for any designer—when Beyoncé’s stylist entered the showroom, she didn’t intend to scale the RVN racks in search of her client’s Super Bowl wardrobe. But a pair of black-and-white leggings—embossed with RVN’s now iconic geometric print—quickly caught her eye, and she asked to carry the piece home for Beyoncé’s consideration.

As the shock faded, however, Mr. Kim grew pessimistic. “I eventually didn’t think much of it,” he recalls. “I was flattered, sure, but in fashion, a stylist pull doesn’t mean much. More than half the time, nothing comes of it.”

Against the backdrop of an empty Superdome, the stadium lights glowing fiercely overhead, Beyoncé stood poised, her leggings prominent through the image’s black-and-white filter.

Mr. Kim smiled and thought to himself, “I have arrived.” 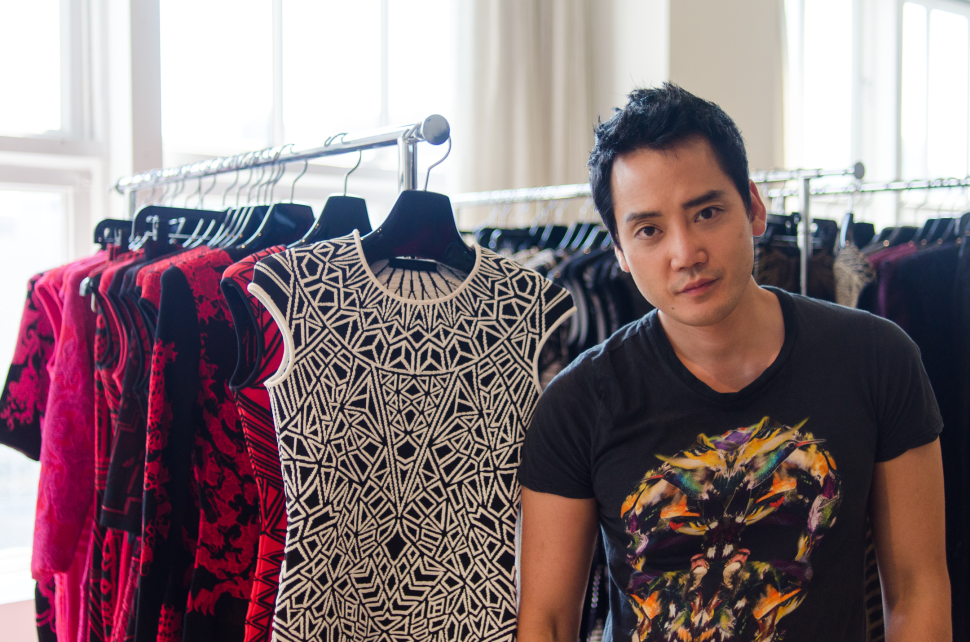