“When I was younger I went to all kinds of rock concerts,” said Jeffrey Deitch, his silk midnight blue lapels illuminated by candlelight. He was at the Americans for the Arts annual Arts Awards dinner at the lavish Cipriani in Midtown, where artists and patrons annually collect Jeff Koons-designed bunny statues for their services. It’s a little like the art world’s answer to the Oscars, and in a nice change of pace, blues legend B.B. King was set to receive the Isabella and Theodore Dalenson Lifetime Achievement Award. “I remember seeing him at an outdoor concert in the middle of an open field in Massachusetts,” Mr. Deitch continued. “It was a whole field of hippies. He was phenomenal. Everyone loved it.”

Mr. King, who was honored alongside the sculptor Joel Shapiro and the actress Dakota Fanning, was on everyone’s mind as the night began. His music echoed throughout the room. “I became, in the sixth grade, more serious and melancholy as a result of B.B. King,” said Queens Museum Director Tom Finkelpearl. Ms. Fanning, the youngest honoree, who, in a pearly pink confection of a dress, looked like she’d floated off a Candy Land board, or maybe one of the sweet-toothed paintings of Will Cotton (the designer of the evening’s aesthetic), said she’d never seen Mr. King play. “But I got to meet him here!” she exclaimed. “Which was amazing.”

MoMA Director Glenn Lowry remembered catching an impromptu performance at Brown University, where B.B. King was receiving an honorary degree. “He picked up his guitar and played,” said Mr. Lowry, who later presented the night’s first award to Mr. Shapiro for Outstanding Contributions to the Arts. “Let’s put it this way, he stole the show.”

Which is pretty much what he did last night, after an introduction from Buddy Guy, one-time band mate of Muddy Waters and one of the greatest electric guitar players ever. “I was born in Louisiana,” Mr. Guy began. “I didn’t know what running was until I was about 17 and of course I didn’t have electricity.” He did have a radio, though, and hearing B.B. King late one night changed his life. “He was special,” said Mr. Guy. “I don’t know if you know this, but I call myself a guitar player. But when I heard him doing that the way he do that I said, ‘Buddy you’ve got a lot to learn.'”

A short video played on enormous twin screens and admirers sung Mr. King’s praises. “B.B. King just happened to grow up on the plantation next to my grandfather’s plantation, Dockery Farms,” Carolyn Powers, one of the event’s wealthy co-chairs, who is probably a better patron than she is a blues scholar, said in the video. “Workers would gather in the evenings after a hard day’s work in the fields, and they would strum their stories on their guitars and this became the storytelling of the blues.”

The video ended and B.B. King took the stage to a thunderous standing ovation that filled the room, right up to its soaring 65-foot ceilings. “You’ve been so good and done so much for so many,” he said warmly. “I’m one of the guys that can’t talk, and when I get started I talk too much about things that you don’t want to hear. But I’ll say to all of you, thank you, thank you. What you’ve done made my life so much easier, thank you. Thank God for you.”

Mr. King accepted his Jeff Koons statuette, and guests continued to gush about their favorite concert experiences over dessert. Did the legend himself, after more than 60 years of performing, have a favorite show? “You know,” he said, “every night. Every time I go on stage I enjoy it.” 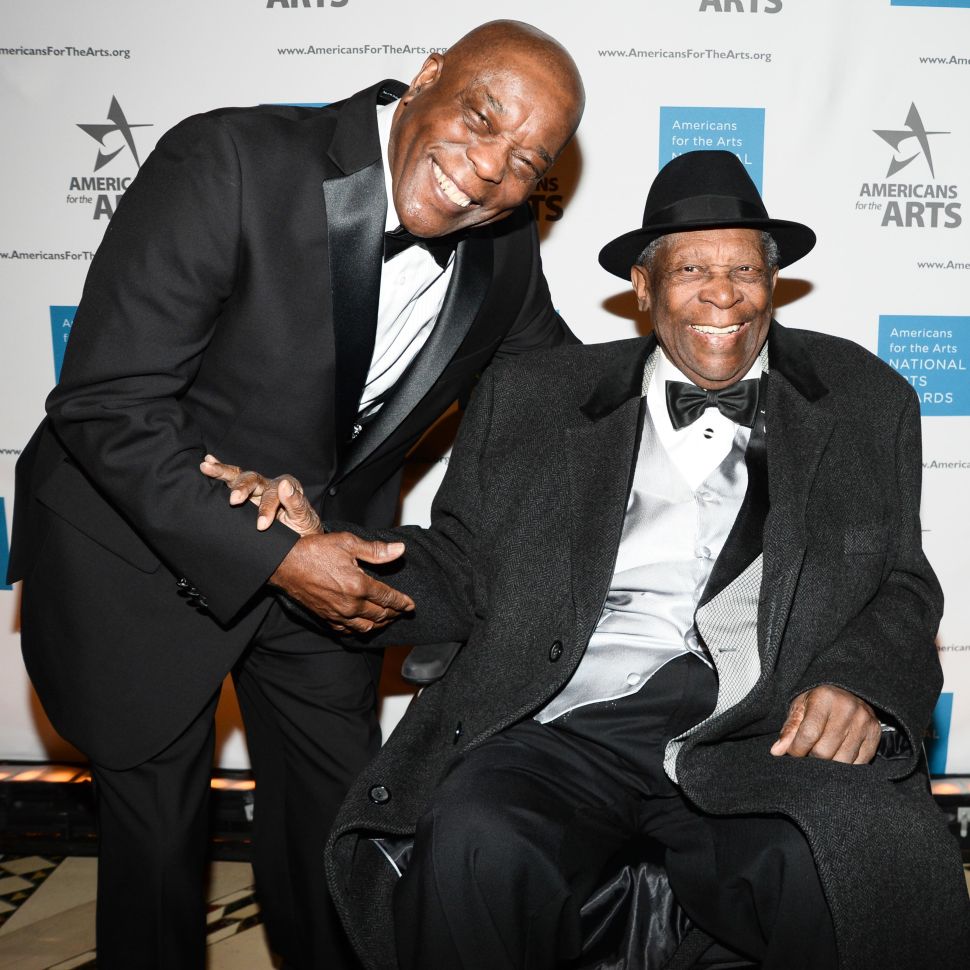