One refrain from Jay Z’s recent single “Picasso Baby” has the rapper describe the jet-set lifestyle (“marble floors, gold ceilings”) and then follow his bragging with the line “aw, fuck it, I want a billion” (or “a trillion”). The song’s music video, a k a “Picasso Baby: A Performance Art Film,” takes its inspiration from The Artist Is Present, Marina Abramovic’s 2010 performance at the Museum of Modern Art, and highlights Jay Z’s “aw, fuck it” lines with cheers from an onlooking crowd. It also happens to feature Ms. Abramovic prominently.

The pairing of these two elements feels appropriate in that Ms. Abramovic held a meeting with Jay Z at her Varick Street office one day prior to the shoot that ended with a promise from the rapper to make a donation to her Marina Abramovic Institute (not that the figure will likely be anything approaching a billion or a trillion).

No sum was mentioned at the meeting, according to Abramovic LLC Director Giuliano Argenziano, but he said Jay Z also intends to offer the institute some other form of ongoing support and likened the forthcoming relationship to Ms. Abramovic’s “long-durational” performance pieces.

Jana Fleishman, a spokeswoman for Jay Z’s Roc Nation, declined to discuss the meeting in any detail, emailing only the following quote: “Yes, Mr. Carter is confirmed to make a donation.”

The meeting represented a potential boon for Ms. Abramovic, who has yet to break ground on her performance art school’s Rem Koolhaas-designed plant in Hudson, N.Y., but has been actively trying to raise $20 million—roughly 10 percent of the endowment of Bard College—for it. This summer, the institute went to Kickstarter to raise $600,000, though it only reached that goal in its final days, with help from an MAI-branded viral video in which Lady Gaga studies “the Abramovic method” by wandering blindfolded through a forest and hugging a giant crystal while nude. (“I believe in planets being lined up in so many ways,” Mr. Argenziano said, “because it was not really a part of a strategy. The idea of Gaga in a video for the Kickstarter, it was really about the calendar. Gaga really wanted to do a workshop with Marina, the workshop happened slightly before the Kickstarter campaign, and editing the material was not so difficult.”) Mr. Argenziano said the hour-and-a-half-long Jay Z meeting, which he attended, was dominated by a 45-minute PowerPoint presentation by Ms. Abramovic on the Institute.

Dealer Jeanne Greenberg Rohatyn, who is frequently described in the press as Jay Z’s art adviser, set up the meeting. She said she went to Ms. Abramovic shortly after learning that he and Mark Romanek had decided to use The Artist Is Present as the video’s artistic basis, a few weeks prior to the meeting. She also helped organize the shoot at Pace Gallery in July.

In the video, a series of prominent art-world personalities sit on a bench before Jay Z, who stands on a pedestal as though he is a work of art, much the way Ms. Abramovic had visitors sit in a chair opposite her during her performance at MoMA.

Jay Z, Ms. Greenberg Rohatyn said, has long been familiar with Ms. Abramovic’s work, though she said she didn’t know whether or not he actually saw the MoMA performance.

“She was thrilled to be able to show what she was doing to Jay,” said Ms. Greenberg Rohatyn, who also attended the meeting. “But, by the way, if he didn’t want to be involved [in the Institute], that was cool too. She just wanted to communicate.

“They were not making a deal in any kind of way,” she added.

All the same, the next day, Jay Z received full-throated support from Ms. Abramovic, who, barefoot, confronts Jay Z early on in the video and later dances with him forehead-to-forehead as he raps. She then gives an interview after the performance footage.

“It was great, it was so much energy, it was hot,” she appears to be telling a reporter, in jump cuts (she was unavailable to comment for this story). “It’s also wonderful for visual artists across the borders of every medium, and music, being the most immaterial form of art, which is so wonderful.”

What Jay Z will contribute to the relationship remains to be seen. Mr. Argenziano couldn’t guess a ballpark figure for Jay Z’s promised donation to the institute and actually missed the recent headlines that he and his wife Beyoncé made $95 million last year.

And no one at the institute, he said, is worried that the forthcoming donation and/or collaboration might not happen.

“We are not losing sleep about these things at all,” he said, “because we know that this is going to happen.” 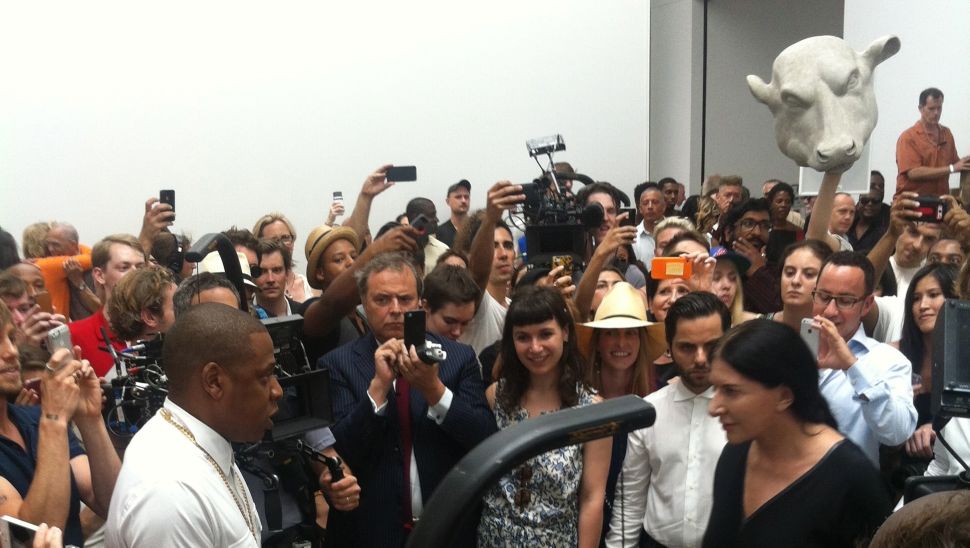