If the opening week of an opera company’s schedule serves as a bellwether for the whole season, there is one thing we can be sure to expect at the Met in 2013-2014: the unexpected.

When rumors began to swirl around three years ago that the 2013 opening night would feature Anna Netrebko’s Met role debut as Tatyana in Tchaikovsky’s Eugene Onegin, the opera world agreed that it would be the news of the season. After all, we would hear Ms. Netrebko in a Russian opera at the Met for the first time since 2002—and not just in any Russian opera, but in the greatest soprano role in the Russian repertoire.  What could make an opening night more special?

As it turned out, the opera and even the soprano played second fiddle to politics on opening night last week. In 2012, Ms. Netrebko and Onegin conductor Valery Gergiev endorsed the candidacy of Vladimir Putin for the Russian presidency; the following year, he signed into law draconian anti-gay legislation that inspired protest across Europe and America.

Though local activists failed to get Ms. Netrebko or the Met’s general manager, Peter Gelb, to make an overt statement denouncing Putin’s policies, this turned out to be the most political opening night in memory. Just before the overture, a disturbance erupted in the Met’s topmost balcony, the Family Circle. “Putin, end your war on Russian gays,” shouted one protester after another, as Mr. Gergiev temporarily abandoned the podium.

The demonstration, as formal and polite as white tie and tails, delayed the performance by only five minutes. After that came over four hours of earnest but unthrilling opera, not remotely the kind of blazing triumph an opening night is supposed to be.

In the role of the shy, bookish aristocrat who falls instantly and violently in love with a virtual stranger, Ms. Netrebko damped down her natural glamour in the manner of Olivia de Havilland in The Heiress: flat hair, little makeup, a plain dress and, unlike Ms. De Havilland, a conscious effort to keep her voluptuous voice slender and virginal.

The production was no help either, though that might have been predicted in advance. The original director, Deborah Warner, dropped out for emergency surgery before rehearsals began; her professional partner, actress Fiona Shaw, took over but left New York three weeks before opening night for a previous commitment. The result was a drab, noncommittal staging pockmarked with long, momentum-killing pauses for scene changes that generally amounted to no more than the rearrangement of a few chairs.

Fortunately, two other principal singers, baritone Mariusz Kwiecien as Onegin and tenor Piotr Beczala as his friend Lensky, are veterans of a number of previous productions of this opera, so they gave reliable “instant opera” performances, the kind jet-setting singers do when they have no time to rehearse. But what should have been a gala event ended up feeling like a midseason revival: respectable, but never glittering.

The following night offered something more than mere respectability: a crisp, well-rounded revival of Mozart’s Così fan tutte. But, again, the evening wasn’t about the opera or even the performance: September 24, 2013, will go down in the annals as Il ritorno di Jimmy, the comeback of Met Music Director James Levine after more than two seasons sidelined by illness and injury.

The maestro, 70, now requires a wheelchair for mobility and a James Bond-esque motorized platform to lift him to the podium, but his musical finesse and intuitive rapport with the Met orchestra are apparently unimpaired. This was classic Levine Mozart, full-sounding without heaviness and fleet without any sense of scurry. Obviously, we’ll need to hear more performances of more works to know for sure, but, from this brilliant “redebut,” it sounds like the maestro is back at the Met to stay.

The audience’s affection for Mr. Levine, and perhaps their awe for his 40 years of service to the Met, overflowed in three standing ovations. The first, before even the first note was played, lasted well over a minute. Under the circumstances, the singers were overshadowed, though tenor Matthew Polenzani, singing through a cold as Ferrando, gave a hero’s performance. Every note rang out full and centered, and he even included the barnstorming second act aria, “Tradito, schernito,” most tenors have nightmares about.

If the remaining members of the cast were less vocally distinguished, at the very least they were meticulously rehearsed and coached, creating smooth, seamless ensembles without any hint of the musical derails that disfigured Mr. Gergiev’s Onegin.

The funny thing, though, is that, in a much trickier score, Shostakovich’s The Nose, Mr. Gergiev led without an audible hitch. What’s more, at the opening performance on Sept. 28, the energy of the anarchic music never flagged or dragged: The two intermissionless hours flew by.

The revival of the 2010 production remains spiky and witty in artist William Kentridge’s staging, an homage to Russian modernist art of the 1920s. The sets and even some of the costumes look as if they’re composed of collaged bits of newspaper, political posters and advertisements, and Catherine Meyburgh’s video projections create a hectic, nerve-jangling visual accompaniment to the surreal farce about a bureaucrat scouring the city for his lost nose.

That’s the role Paulo Szot sings, as he did in 2010. This time around, he’s a bit rounder both of physique and voice, and his mellow baritone—not the most intuitive vocal casting for this schlub of a character—easily encompassed the part’s wide range and idiosyncratic roster of vocal effects: sobbing, barking and snoring.

The immense cast of singers, actors and dancers performed with dazzling precision and only slightly less dazzling energy. The only time all afternoon they were thrown for a loss was during company bow, when the rising show curtain ripped with a deafening “scrunch” and the dozens onstage unanimously reacted with a thrill of horror as if Bernadette Peters had just yelled, “The giant’s a woman!”

Starry new productions, fine-tuned pet projects for a legendary maestro and offbeat operas a fan might see only once or twice in a lifetime—these aren’t the meat and potatoes of an opera company. For half of the nights of the season or more, the Met runs on repertory performances of standards like Rigoletto, Madama Butterfly and L’elisir d’amore.

Or, sometimes, Bellini’s Norma, a work which, oddly enough, used to be a “special project” for a once-in-a-generation diva: Hardcore buffs used to snarl, “Zinka Milanov may think she can sing Norma, but, believe you me, she’s no Rosa Ponselle!” Since the 1970s, though, this piece has been desanctified into a second-tier repertory work, showing up for a run of eight or 10 performances a few times per decade.

On Sept. 30, the role of Norma was sung by a Met favorite, Sondra Radvanosvky, who certainly possesses—flaunts, even—the right sort of soprano for the part: big, rangy, piercing, flexible. But, despite all of her hard work and good intentions, she turned out to be almost no Norma at all.  It’s not so much that she can’t act—she’s not much worse than most opera singers in that department—but rather that she can’t express. Her shimmering high pianissimo notes, for example, are technical marvels, yet they carry no emotional weight. She’s never rapt or pensive or ecstatic or in any other psychic state; she’s just doing what amounts to a series of elegant circus tricks.

Sadly, Ms. Radvanosvky wasn’t the worst thing in the show. John Conklin’s settings made barbaric Gaul look like a downmarket Soho gallery and mezzo Kate Aldrich—as Adalgisa, Norma’s rival—started the performance voiceless and then got worse. On the other hand, conductor Riccardo Frizza demonstrated a firm sense of the architecture of the score, and tenor Aleksandrs Antonenko—as Norma’s philandering lover, Pollione—mustered vocal personality sufficient to reroute the opera’s emotional arc. It should have been called Pollione.

But whatever the title, this didn’t come close to being solid repertory opera; I’d be reluctant even to call it “routine.” So the most unexpected revelation of opening week was this: “Expected” is something the Met can’t do. 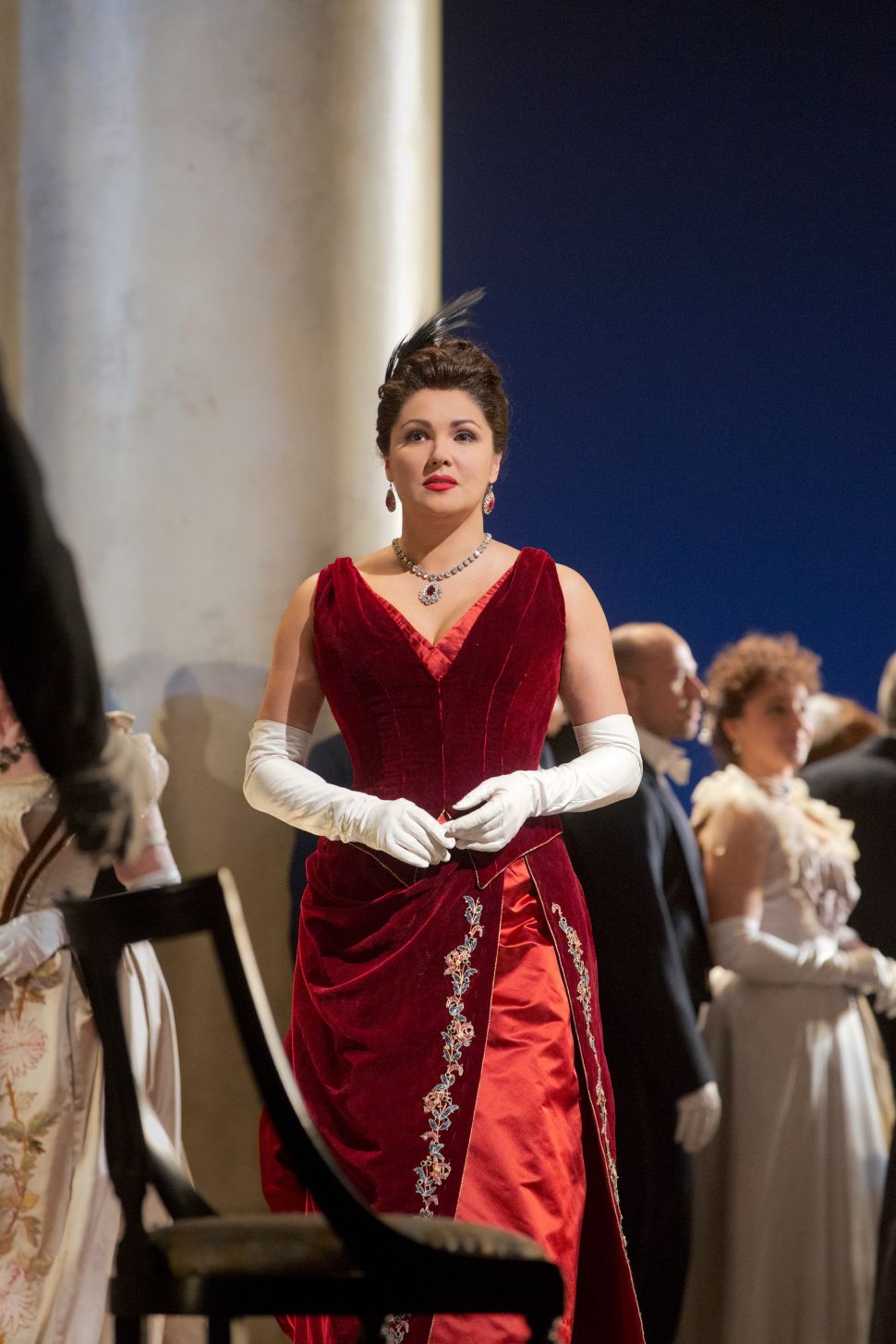