Arcade Fire has never been known for its sense of humor.

The sprawling Montreal ensemble shot to the top of the indie rock pecking order with three albums of earnest, plangent, fitfully electric anthems about childhood and death, with a sprinkling of geopolitical dirges and riffs on the corrosive influence of technology.

But on Friday the septet entered its first of two Brooklyn warehouse shows determined to crack some jokes. Fans were in on the first one. The CMJ week concert at the dingy 299 Meserole Street wouldn’t feature Arcade Fire as the headliner, but rather The Reflektors, an alias derived from the disco-tinged title track of the gang’s latest album, due out next Tuesday.

Less expected was a switcheroo at Friday’s show that had James Murphy (the former LCD Soundsystem frontman who produced “Reflektor”) introduce the Reflektors—or at least three of them—on a phony stage before a curtain dropped across the football field-sized warehouse to reveal Win Butler and company in their shiniest Studio 54 ensembles, launching into the lead single. This resulted in a predictable stampede, and hundreds of diehards who’d staked out a place by the decoy stage between 7 p.m. and 9:45 p.m were left to sulk along the perimeter.

“I’m sorry we played a trick on you,” Mr. Butler said midway through the faux band’s roughly 45-minute set. “We thought it would be funny. It’s not the first time we were wrong about that.” I’m paraphrasing slightly, because sound at the built-for-raves venue could only be forgiven by techno heads deep into their Molly stashes as the sun rose over East Williamsburg.

But I can say with pinpoint accuracy that no one in the crowd was laughing during the bum rush. Without the fake, audience members (most of whom adhered to the dress code’s formalwear option, with a few in costume) may have been more forgiving of the night’s other indignities, which included inept bartenders, the dreaded ring of porta potties and a dearth of old hits.

The night’s grimy trappings did evoke an after hours rave, which I suppose was the point. Arcade Fire, under Mr. Murphy’s guidance, is belatedly hopping on the dance music bandwagon two years after LCD Soundsystem retired, signaling the end of the disco-punk era. They also trail Daft Punk, which earlier this year brought “life back to music” with vintage analog beats. A more troubling comparison could be to Lady Gaga, whose recent penchant for—in Jon Caramanica’s words—“cheap experimental theater” is rivaled by Arcade Fire’s embrace of face paint, life-sized bobble heads and whatever the hell Regine Chassagne is doing  at the 2:30 mark here.

Granted, “Reflektor” doesn’t strive for steely techno, doomsday dubstep or club banger status. The plodding reggae homage “Flashbulb Eyes” came second and was one of the evening’s few true duds, sending the crowd toward interminable beer lines. Otherwise, the plush “We Exist” nicely conjured a New Wave B-side. On “Normal Person” and “Joan of Arc,” the band tore through some of its most straightforward, if somewhat straight-laced, rock. And the irresistible “Afterlife” recalled the best of the group’s Grammy-winning album “The Suburbs.”

“We’re not quite ready for primetime,” Mr. Butler’s Reflektors alter ego told the somewhat restive crowd of, by some reports, 2,000. “We’ve only played for 200 people before.”  The headliner’s “covers” of Arcade Fire’s “Sprawl II (Mountains Beyond Mountains)” and “Neighborhood #3 (Power Out)” suggested otherwise, even if the live antics of the younger Arcade Fire—scaling concert trusses, drumming on each other’s heads—were absent.

Unfortunately, much of the goodwill restored by the band post-stage fake out evaporated like sweat into the rafters of the overheated 299 Meserole Street. The reigning kings of indie—because, really, The Reflektors in-joke was tired by now—abruptly left the stage after jamming through “Here Comes the Nighttime.” With the lights still out, the audience stood around like idiots for 10, 15, 20 minutes waiting in vain for an encore.

Mr. Butler reemerged to make an awkward, muffled joke about body odor and said, “We’re not playing any more songs. But we are going to play some dance music.” The crowd—or at least my portion of it—loudly booed. Recoiling a bit, Mr. Butler said, “If that’s super a bummer that we’re only going to dance with you and party all night, then go home.” (The dance party was over by midnight.)

Many fans did, the memory of “Neighborhood #3” standing out as a highlight, but the evening’s unfortunate bookends suggesting that Arcade Fire had gotten too big for this sort of block. 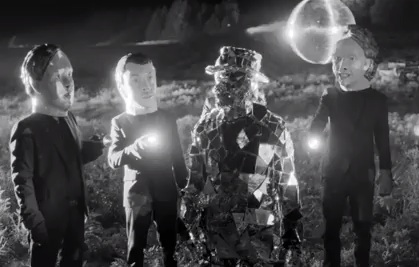