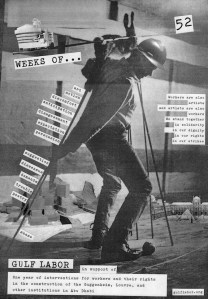 Walid Raad and a group of other artists, writers and activists have announced a year-long campaign, starting this month protesting the “deplorable living and working conditions” of migrant workers building outposts for three high-profile Western arts institutions in Abu Dhabi’s Saadiyat Island—the Guggenheim, the Louvre and the Sheikh Zayed National Museum (which is being built in collaboration with the British museum), all of which are being designed by world-famous (and very expensive) architects.

The campaign, called “52 Weeks,” has artists from around the world contributing work in protest of the treatment of workers in Abu Dhabi. Participants in the first 13 weeks are Doug Ashford, Doris Bittar, Sam Durant, Matthew Greco, Gulf Labor–an organization of artists, of which Mr. Raad is a member, that wants to protect the rights of workers during the construction of the aforementioned institutions–Hans Haacke, Thomas Hirschhorn, Lynn Love, Guy Mannes-Abbott, Naeem Mohaiemen, Mr. Raad, Oliver Ressler, Andrew Ross, Yace Salloum, Ann Sappenfield and Gregory Sholette. In a statement, Mr. Raad said:

If the Guggenheim, Louvre and TDIC [Tourism, Development & Investment Company. Abu Dhabi] were willing to invest as much energy and resources into safeguarding the rights of workers buildings museums on Saadiyat Island, as they are on hiring “starchitects,” building engineering marvels, and buying challenging artworks, then their claims of building the best infrastructure for the arts in the world would be more than words in the wind. Abu Dhabi, its residents and workers, deserve more than the “edgy” buildings and collections proposed by the best museum-brands in the world. Abu Dhabi also deserves the development, implementation and enforcement of the most progressive labor laws for their emerging institutions. If the museums can’t see this, then I can only hope that the ruling Sheikhs and Sheikhas will, and soon.

Members of Gulf Labor first spoke out over Guggenheim Abu Dhabi’s workers rights in 2011 with an open letter to Richard Armstrong, the Guggenheim Foundation’s director, and an online petition, which was signed by 135 artists. The letter cited documentation by Human Rights Watch of “a cycle of abuse that leaves migrant workers deeply indebted, poorly paid, and unable to defend their rights or even quit their jobs” in Abu Dhabi. The letter concluded, in part, “Our cooperation with the Guggenheim in Abu Dhabi (and, for many of us, at other Guggenheim locations) will not be forthcoming if the Foundation fails to take steps to safeguard the rights of the workers who will be employed in the museum’s operations on Saadiyat Island.” At the time, the Guggenheim Foundation released a statement to Bloomberg calling the accusations of labor violations “misinformed.”

Construction is set to be completed on the art institutions in Saadiyat Island’s so-called cultural district over the next few years.