Today’s controversy stems from a large, sphinx-like Banksy sculpture that reportedly appeared in Queens around 7 o’clock this morning. Apparently delivered “by two hipsters”—Banksy’s amiable sidekicks, no doubt—the statue was first discovered by a man in Queens, who promptly claimed its ownership and proceeded to sell its loose fragments for $100 each.

A woman named Jennifer Hunt, pictured on the Instagram of Nic Garcia, who has been documenting the scene for Gothamist, claims to object to the piece-by-piece selling of the sculpture, and is trying to get the sculpture into Sotheby’s hands.

“I am trying to have it not sold in pieces!!!” she wrote on Instagram, “I called Sotheby’s for advice on what to do! Who do you call for something like this?”

Others at the scene, Mr. Garcia included, sensed that Ms. Hunt is simply trying to take control of the situation and make money for herself.

“In all honesty I’d rather see it crumble to pieces than have someone take it for themselves and make money off it!” user michaeldornay wrote.

As Gothamist explains, Banksy’s latest three-dimensional installment is unlike his paintings that go up on the sides of buildings; while the paintings technically belong to whomever owns the buildings that serve as their canvasses, a statue plopped down in the middle of public property doesn’t have a clear owner.

Things reportedly got pretty crazy come early afternoon. Activities around the sculpture included but were not limited to: some dude showing up with a hammer and chisel and being chased from the vicinity; the cops showing up to survey the scene; the sculpture being moved to a more secluded spot behind a tractor trailer; some people scrambling and fighting to collect the remaining loose fragments of the sculpture. 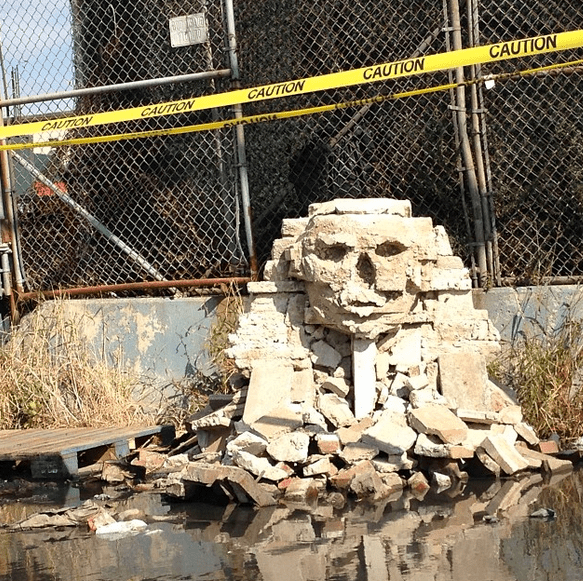