Last week, Daniel Loeb’s activist hedge fund, Third Point Partners, which weighs in at a hefty $15 billion, increased to 9.3 percent its share in Sotheby’s (aka BID) stock. Another activist fund, Marcato Capital Management, owns about 6 percent of the auction house, and billionaire Nelson Peltz of Trian Fund Management owns another 3, putting about 19 percent of the company shares in “hostile” hands.

Right on cue, Mr. Loeb wrote one of his classic letters excoriating BID Chairman Bill Ruprecht for his extravagant perks and salary while demanding that he step down in favor of a new management team and a few Third Point appointed directors.

By Friday morning, Mr. Ruprecht had dug in his heels, announcing that the company he chairs had taken a “poison pill.” This is not an uncommon defense mechanism for public companies; poison pills are intended to dilute the value of the stock by flooding the market with additional shares if a hostile buyer goes over 10 percent. But one can’t help but savor the irony, in Sotheby’s case, that a company that specializes in making or faking bidding wars for art should create obstacles for professional investors who want to bid up the company’s shares. BID is currently up to more than $50 per share, a nearly 47 percent increase over its share price at the beginning of this year, so even if this is all smoke and mirrors, the sizzle is working on the street.

If Mr. Loeb’s track record outside the art world is any indication, we may well see BID achieve $60 or even $70 per share, a market capitalization of $4.5 billion to $5 billion. Third Point has delivered outstanding results for its investors since Mr. Loeb founded the firm in 1995. Mr. Loeb has made a habit of tilting at large companies, most recently his 7 percent position in Sony and his subsequent demand that it split the entertainment business from the rest of the company: The split did not occur, but the stock did go up handsomely. In the case of Third Point’s investment in Yahoo, Mr. Loeb was successful in bringing in a new CEO and literally doubling the stock price, a big win for both shareholders and investors in his fund.

But is BID really worth it? Is the company as old-fashioned and stodgy as Mr. Loeb and his co-investors believe—in his own words, an “Old Master painting” badly in need of restoration? As Mr. Loeb pointed out in his scathing letter, BID has lagged behind its archrival, Christie’s, in both market share and the hunt for top lots to feature in major biannual evening sales. Christie’s has set more records recently for blue-chip artists like Calder, Yves Klein and Jean-Michel Basquiat. Meanwhile, Sotheby’s achieved lackluster results for a large Barnett Newman painting featured last season. Consigners have responded to Christie’s momentum by bringing valuable artworks to the block, like Jeff Koons’s Balloon Dog, estimated to sell for $35 million to $55 million in a Christie’s sale next month. Sotheby’s has parried with a major Warhol disaster diptych in its corresponding November sale, but silver paintings from the ’60s don’t have the same spark.

Would that Newman painting have done better at Christie’s? There is one macro difference between the two companies, from which many other differences stem. Sotheby’s is publicly listed on the New York Stock Exchange, and Christie’s is a private company controlled by the French art collecting luxury goods tycoon Francois Pinault. In 2009, in the wake of the financial crisis, Christie’s continued offering consignors juicy guarantees for major evening sale lots, even if it then tried to lay them off on third parties, locking in profits for the house. Mr. Ruprecht, wanting to sound more prudent, told the stock market that Sotheby’s would no longer offer guarantees, because the company had been so badly burned in evening sales of November 2008.

Mr. Ruprecht’s approach might have sounded good to myopic Wall Street types who see the art market as fraught with risk and view the art business as narrowly as any other business, but the strategy was wrong.

Art is a fashion-driven business prone to either feast or famine, and star lots and market share are critical in maintaining the appearance of success, even when fierce competition leads to side deals where house premiums sometimes get cut to the bone. Though art collecting has grown globally, and prices have risen overall, every artwork, and each artist’s individual market, tells a different story; the line between a world record sale and a flop is all too often razor-thin. In order to remain at the top of their game, the auction houses must charge after those few lots in a season that have the potential to make headlines. Having no one to report to but Mr. Pinault, Christie’s was able to be more nimble, despite an uncertain world economy.

Since the epic disaster of the painfully absurd “price fixing” scandal back in 2000, Sotheby’s and Christie’s have developed very different styles of doing business. Sotheby’s acts like a European academic institution where department heads are virtually tenured and there is limited incentive or leeway for underlings to go hunting for deals. This feeling is palpable as one walks into the building; behind the information desk are tight-suited staffers who insist on asking where you are going before they let you up the elevator. There is a British, clubby feeling of privilege and stuffy pedigree; it’s a place where you, the nouveau riche, have come to ogle the dusty treasures of the refined Old World while the natty experts stand aloof as if you have interrupted their rereading of Proust.

Christie’s is considerably warmer. Until recently, a genial, mustachioed doorman, Gil Perez, welcomed you. (Sadly he retired last year.) You walk into a labyrinth of art for sale. Sometimes, large pieces are plopped awkwardly in front of the building. One is never really sure which of the experts is the department head, but they are always in a rush, as if you are talking to them in an airport and they have just a few minutes between flights.

Fine art has traditionally been marketed in the buttoned-up, European manner, and Christie’s lack of hierarchy and more democratic approach has made some new buyers feel less like they are trying to get into a club where they know they are not welcome. I happen to favor the snottier style—as Groucho said, I wouldn’t join any club that would have me as a member—but times have changed, and the social dynamic of collecting is more powerful than ever. Sales are not just about the quality of the works or an elegant, sophisticated presentation. Aggressive marketing, over-the-top parties and elaborate catalogs have raised the stakes of this expensive battle.

Still, Sotheby’s is the premier name in art. It has been around since 1744. I would guess that the name alone is worth at least $1 billion, or about $14 per share. For the value of Sotheby’s to be maximized—and for it to exist on a level playing field with Christie’s—it would likely have to go private or be merged into a larger entity. Look at eBay, which has a market cap of $72 billion; sources tell me it is looking to expand its presence in art. It could easily swallow up Sotheby’s and instantly change the value and global reach of the company. Far-fetched? I don’t think so. EBay certainly knows how to build efficient online selling platforms. Then there’s the more natural and obvious fit with Bernard Arnault’s LVMH luxury conglomerate, which sports a market cap of $72.66 billion. Here’s a company that knows how to maximize brands globally and is not afraid to take on fixer-uppers with great brand strength and identity. Mr. Arnault gave auction house ownership a go when LVMH financed Phillips from 1999 to 2002—maybe he has learned from that lesson and is ready for another round. And perhaps Mr. Arnault would enjoy challenging Christie’s and the Pinault family, his archrivals in luxury retail.

Every system benefits from being challenged, and I believe the present firefight will benefit Sotheby’s and in fact already has. But don’t expect it to last long: The art world is a lot smaller than outsiders believe. Don’t be surprised if New Canaan’s own Mr. Ruprecht and the Upper West Side’s influential Mr. Loeb kiss and make up. Yesterday’s archenemies can be tomorrow’s BFFs when there is money to be made. 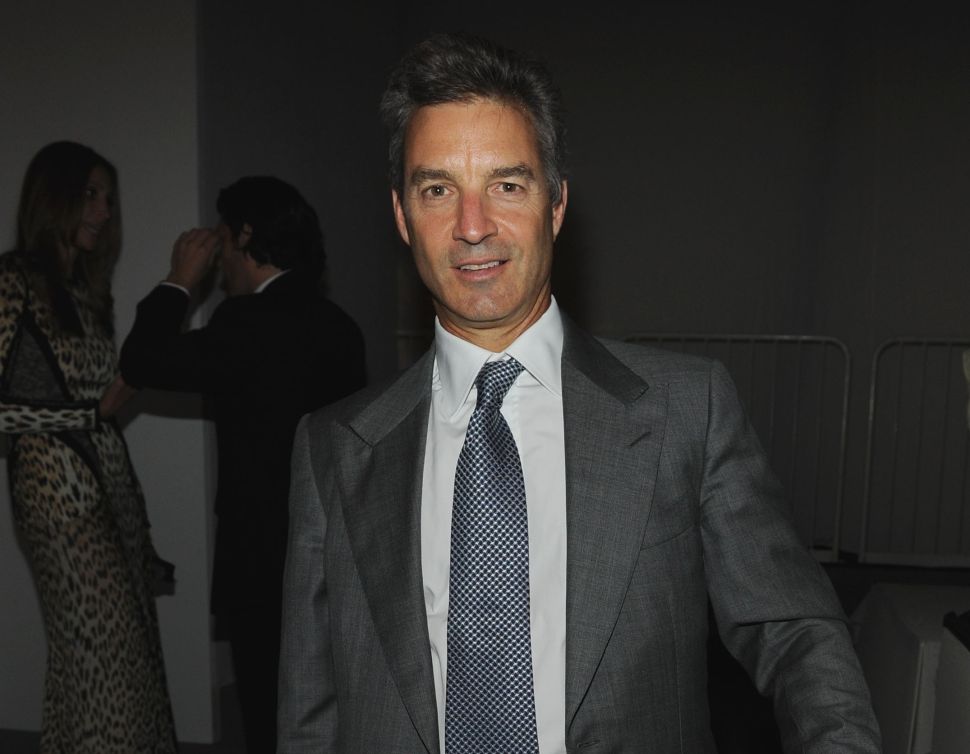