Speaking on Norman Seabrook’s AM 1600 WWRL radio show, Mr. de Blasio urged his supporters to turn out for Mr. Thompson, whom he has often described as a close personal friend.

“I want to remind everyone that he has a Republican opponent. I think everyone within the sound of my voice should redouble their efforts to get Ken elected in Brooklyn,” Mr. de Blasio proclaimed.

“Bill, you can’t say it, but I can: It’s a damn shame that Joe Hynes is feeling the way that he is,” he declared.

“No, I can say it, too, Norman,” replied Mr. de Blasio, reiterating the criticism. “I think, you know, fair is fair. We have Democratic primaries. And I’ve gotta tell you: my primary opponents have been exceedingly gracious, as you’ve noticed, and have all agreed to support us with a whole heart. They’ve done, really all of them, a fantastic job of helping us.”

“I think Democrats are supposed to support Democrats,” he added. “As we used to say, as children: Ken won fair and square. I don’t think there’s anything else to it and it just makes me, as a Democrat, want to work harder for Ken.”

Mr. Seabrook, an ardent supporter of Comptroller John Liu, who came in far behind Mr. de Blasio in the primary, also used the appearance as an opportunity to formally endorse the front-runner.

Mr. de Blasio described the endorsement as a “tremendous honor” and went on to urge voters to come out to the  polls on Nov. 5.

“I just want to emphasize with humility, this ballgame ain’t over ’til it’s over,” he said.

Update (2:07 p.m): Mr. Hynes’s spokesman responded with a statement reading: “Joe Hynes has always been and always will be a Democrat. He is running to keep a corrupt, convicted felon from influencing the DA’s office.” (This is a reference to convicted ex-party boss Clarence Norman, whom Mr. Hynes claims–and Mr. Thompson denies–played a key role in Mr. Thompson’s campaign.) 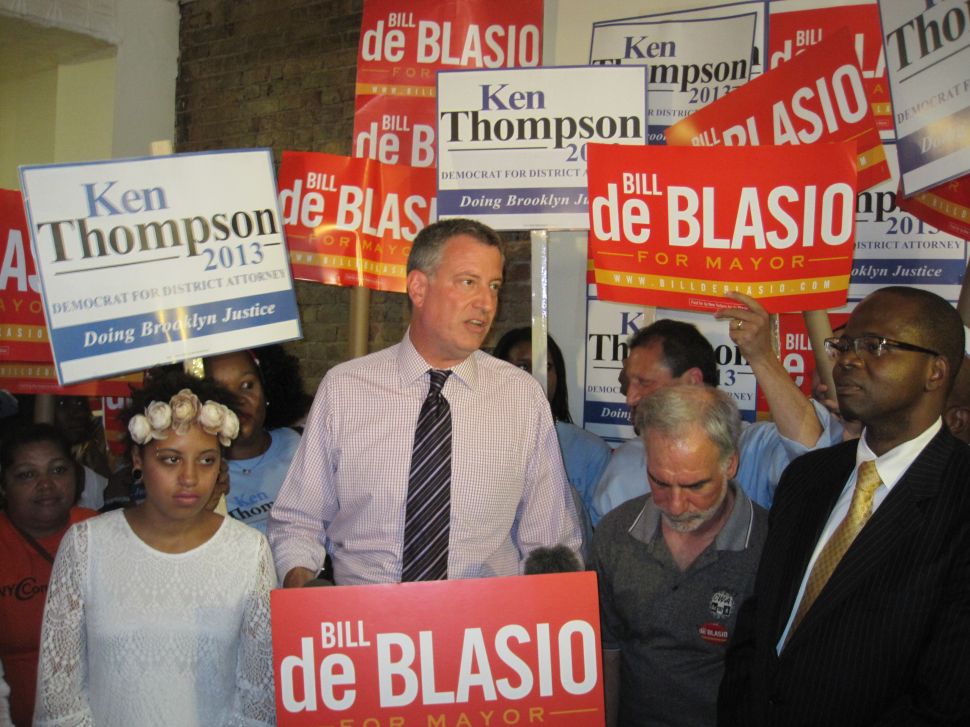