The mayoral race today went from ferocious to bookish.

At an immigration rally on the steps of City Hall, the race’s front-runner, Bill de Blasio, repeatedly flaunted his 69-page policy booklet, waving and leafing through his raft of proposals as a way to demonstrate to the press–and his Republican rival, Joe Lhota, who was not present–that he is indeed a candidate of big ideas.

The book first emerged as the Democrat, fielding questions from reporters, was asked about charges from Mr. Lhota today that he was highlighting his family on the campaign trail because he did not have “big ideas” to discuss.

“I think we may even have a copy of our platform book somewhere over there?” said Mr. de Blasio, grinning. “Hand it over sir!” he told an aide.

“I’d like to visually display–why, what’s this? My friends, this is a platform book, our friends in the media. Look at all the pages of platforms,” he gloated, turning page after page. “We put this out months ago. At the time, one of our leading newspapers said it was one of the most comprehensive mayoral platforms that have been put out in recent memory. It is filled with bold, progressive ideas that acknowledge we can’t continue the status quo in this town and we have to make serious changes.”

Mr. de Blasio brought out his book again to answer another question: why so much campaign rhetoric has been focused on the legacies of the Dinkins and Giuliani administrations.

“I just wish I had some way to illustrate that my vision is forward-looking and about the substantive changes we need to make in this city,” Mr. de Blasio replied, sarcasm creeping in his voice. (Mr. de Blasio has seemingly become more testy with the press at recent events.)

“I just wish I had something that would physically–oh look, I have a platform book which was published months ago,” he said, holding up his book again. “Which is  the reason a lot of people here are actually supporting me because of the vision and the ideas in this book.” 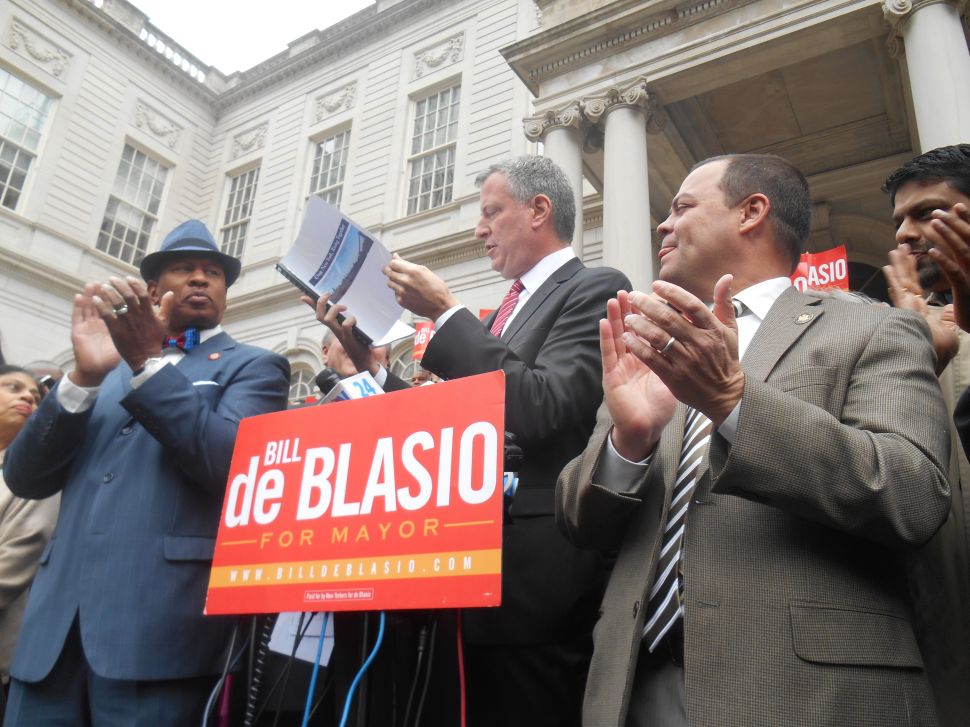