Mayoral front-runner Bill de Blasio today backtracked on his claim that he is a “fiscal conservative,” saying that he should have dubbed himself “fiscally responsible” instead.

During a speech yesterday in front of the Association for a Better New York, the Democrat—who has run the race as a liberal progressive, vowing to raise taxes on the rich and address growing income inequality—claimed that he is, in fact, a “progressive activist fiscal conservative, but … still a fiscal conservative.” The declaration sparked a round of mocking from his Republican rival, Joe Lhota, whose campaign blasted the rhetoric as “unreality TV.” But today, speaking to reporters after a birthday rally for Reverend Al Sharpton in Harlem, Mr. de Blasio said that he had perhaps minced his words.

“Look, I’m going to use the more precise phrase: I think I’m a fiscally responsible progressive,” he explained. “If you look at the whole quote, I tried to get it right and say I’m a progressive, I’m an activist, I’m also fiscally cautious. So I’ll use this, I’ll try on this for size: a fiscally responsible progressive. Because what I’m trying to say is to achieve the changes I want to achieve, we must have a sound city government, we must be on a sound financial footing.”

“There’s no contradiction between good fiscal management and an activist government–a government that seeks to address inequality and plays a major role in addressing the problems of our time,” he added.

The comments came after the mayoral rivals addressed a standing-room-only crowd at the House of Justice, where Mr. de Blasio was greeted with roaring applause and a standing ovation. During his remarks, he showered praise on Mr. Sharpton.

“The voices that speak so passionately about addressing inequality head-on are in fact the greatest patriots in our nation, and none greater than Reverend Sharpton,” said the six-foot-five Mr. de Blasio, as Mr. Lhota, stuffed awkwardly into a small chair, sat looking up at him.

But Mr. Lhota, whose old boss Rudy Giuliani had a famously icy relationship with Mr. Sharpton, also received a warm response, both from the audience and from the reverend—who joked about the fact that the two men were born the same year, just 96 hours apart. (Mr. Lhota’s birthday is later this week.)

“You can tell looking at us the difference that can happen in a short span of time,” joked Mr. Sharpton, zeroing in on Mr. Lhota’s balding head. “I’m talkin’ about his hairstyle and my hairstyle.”

In his remarks, Mr. Lhota doubled down on his vow to listen to all communities–and was commended by Mr. Sharpton for showing up, despite their ideological differences.

“He knows it is unlikely I’m going to endorse him. But it is also unlikely that we can move in this country if we all are not talking and at least understanding where we agree and disagree,” Mr. Sharpton said.

After Mr. Lhota spoke, Mr. Sharpton offered the candidate a copy of his new book as a birthday gift. As the crowd laughed, Mr. Lhota, pulled a pen from his pocket and asked Mr. Sharpton to sign it.

Later at a campaign stop on the Upper East Side, Mr. Lhota sounded dumbfounded when asked about Mr. de Blasio’s walk-back of the “fiscal conservative” claim.

“I have to absorb this for a second,” he told reporters. “He is not a fiscal conservative. No matter how many times he says it or tries to say it again, It’s just not true.” 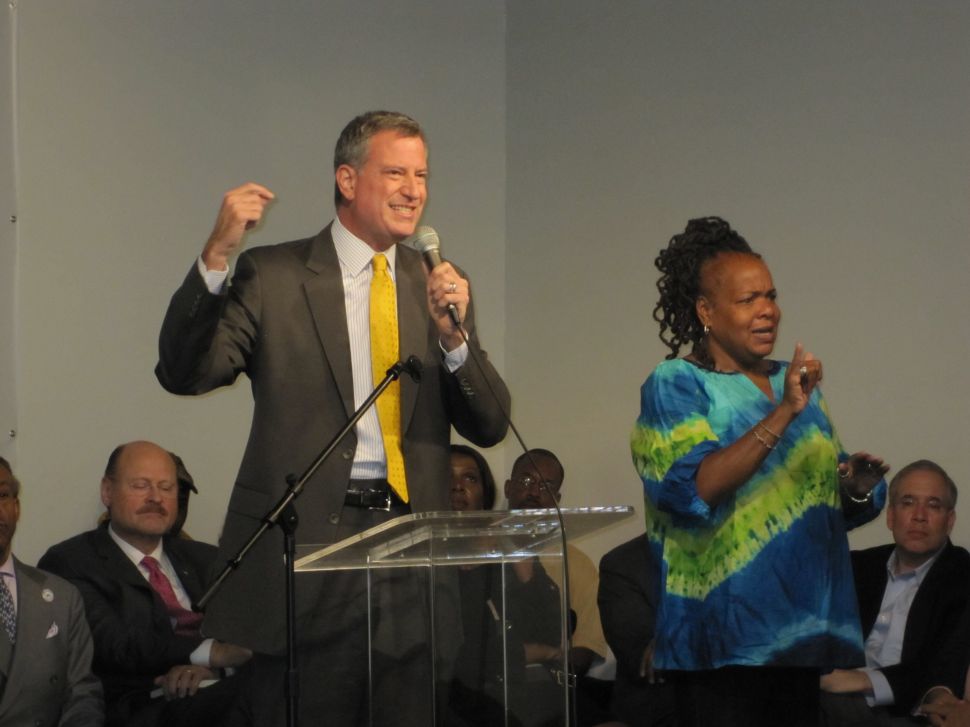