FAIR LAWN – The crowd of over 100 Democratic loyalists stood and cheered at the Land and Sea Diner when Newark Mayor and U.S. Senator-elect Cory Booker parachuted into his home county on a sunny Saturday. His mission: to counter the effect of Gov. Chris Christie’s coattails in local races.

Booker appeared as part of a statewide swing through Bergen, Essex, Middlesex and Passaic counties designed to shore up Democratic candidates who wonder if a potential Christie crushing of Democratic gubernatorial candidate State Sen. Barbara Buono (D-18) augurs ill for their hopes. But Booker, raised in nearby Harrington Park, pushed back, offering support for state Legislature and Bergen Freeholder candidates in the heart of Legislative District 38, an electoral flashpoint in the 2013 campaign.

Booker stood side by side with Fair Lawn’s own State Sen. Bob Gordon (pictured), who faces a strong challenge from Oradell attorney Fernando Alonso in the 38th District, and offered strong support with a tonsorial twist.

“I told Bob that as soon as my campaign was over, it was like a personal mission to make sure that the senator and his Assembly people get elected,” Booker said. “I seem to remember [Gordon] saying that if I helped him win, he would shave his head just like me.. . . if so, I’ll be right there with the clippers. He could raise money for his campaign.

“The Democratic Freeholder [candidates] have a stewardship over the county that I love,” added Booker as candidates James Tedesco, Christopher Tully and Lorraine Waldes looked on. “They’re finding ways to do more with less, reduce taxes and stop the kind of games that often caused the corruption of the past. Yesterday, I recorded robocalls, and I’ll be back up here working really hard to get them elected.”

Booker also took the opportunity to highlight his points of policy divergence with Gov. Christie when endorsing the entire Democratic slate, including Buono.

“I sincerely am a friend of the governor’s, but this is a race where there are clear policy differences,” Booker noted after his speech on his way out of Bergen County. “It’s clear that the state lines up on policy behind Barbara Buono.”

The timing of the Oct. 16 special U.S. Senate election does not allow Booker much time to bolster New Jersey’s Democratic candidates before the regular Nov. 5 Election Day. But in Bergen, Freeholder candidate Tedesco felt that Booker’s arrival was far from too little, too late.

“Look at him today – it wasn’t about his celebrity. It’s about him coming here and keeping his commitment to us,” said Tedesco, the former Paramus mayor. “A month ago, he said, ‘After I get elected, I’m coming back.’ He’s living true to his word. Where is he? He’s in the heart of Bergen County. And that benefits us.”

Gordon, perhaps, is the candidate who could most benefit from Booker’s backing. It was Christie, the state’s other political superstar, who said that he “can’t stand” Gordon at a Bergen County Republican Organization fundraiser in Hackensack in August, according to previously published reports.

But when asked about Christie rattling his sword against him, Gordon, amidst the rattling of diner spoons and coffee cups, seemed unperturbed.

“I’m pleased that I’m on his radar screen. I had friends in the room when he made those comments, and what I’m hearing is that it was really for the benefit of the audience,” Gordon said. “The first day as far as I know that he’s campaigning for Fernando Alonso is that he’s coming to Fair Lawn one day next week. It seems to me that actually the governor is really not paying much attention to the Republican senatorial candidates at all.

“Keeping the majority [in the state Senate] means that we maintain the independence of the Supreme Court, which affects so many other things,” Gordon added. “It is more important than anyone’s political career.”

Bergen County Republican Chairman Bob Yudin was not impressed by Booker’s return to his native county.

“[Booker] has no coattails in Bergen County. He’s no help at all,” Yudin said. “The issue that matters here is property tax relief. The residents of Bergen County are desperate for relief, and the Democrats, whether at the legislative level or the county level, only give them more taxes. Governor Christie got a glowing endorsement editorially from the Bergen Record, and he has given meaningful property tax relief to New Jerseyans through the two-percent property tax cap. That relief is what the Republican Party in Bergen County is trying to accomplish.”

Booker campaigned last weekend not only for Democratic candidates around the state but also in support of the Nov. 5th ballot question calling for an increase in New Jersey’s minimum wage.

After a Saturday rally in Newark in support of raising the wage that was attended by both Booker and Buono, State Senate Majority Leader Loretta Weinberg (D- 37) noted that Bergen Democrats were grateful for his support, but not dependent on it.

“Although we greatly appreciate Senator-elect Booker coming in, we have also been running very aggressive, well-funded campaigns, particularly in Districts 36 and 38,” Weinberg said. “I don’t think that anybody was waiting in Bergen County for star power, but having somebody of the stature of Cory Booker come in during the last nine or ten days before an election becomes extremely important.” 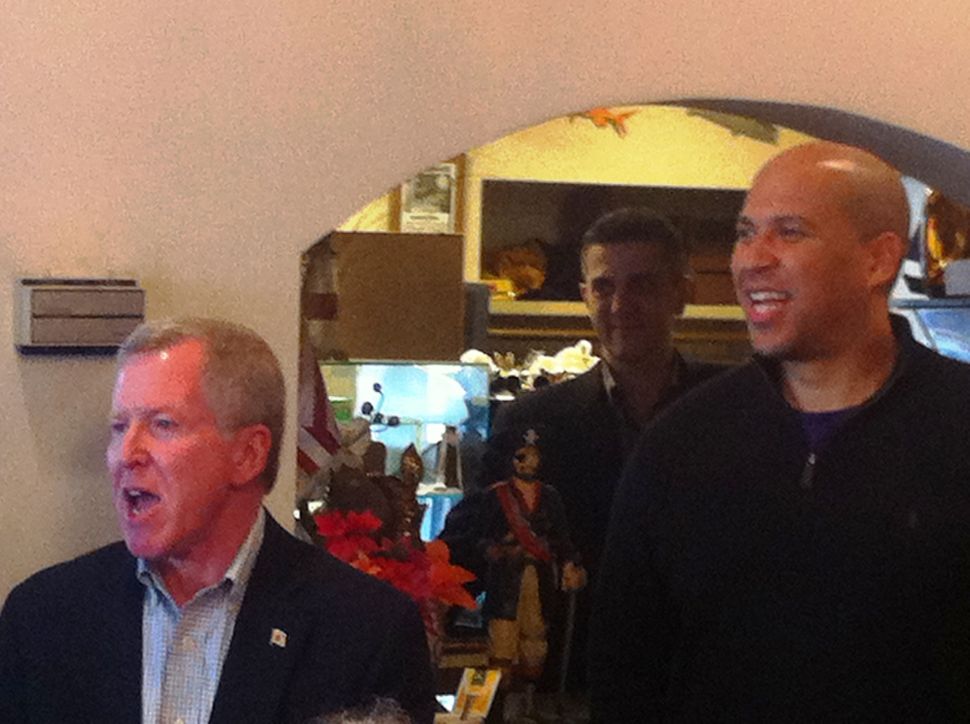