The Prada flagship store in Soho—oh, you know, that $40 million block-size Rem Koolhaas-designed imposition smothered in black glass that opened just weeks after 9/11—is not the place one wanders into expecting a quiet reading from established novelists.

And yet, against all odds, the temple to Italian couture staged such an event last week, even outfitting the usually shabby men of letters in crisp new Prada suits.

“They really dressed me up for this!” said Jonathan Ames, the writer who got famous hanging with druggies and derelicts for his column in the New York Press (he also created Bored to Death, of course).

“I actually have some clothing allowance left over,” said Jay McInerney, another writer, standing with Mr. Ames, who is familiar with scenes seedier than this.

What’s more, organizers went out of their way to bus in actual youngish scribes from Fort Greene and Park Slope. Editors at Harper’s, leftist contributors to The New Inquiry and the entire masthead of The American Reader cut through the typical boutique-bash crowd, a strand of sparkling intellect seasoning the horde of pretty faces. If you took out the male models moonlighting as cater waiters and squinted, the crowd could have been airlifted from a reading at BookCourt.

But squinting was unnecessary, as Prada had something to sell other than its literary bona fides: pricey eyeglasses. Earlier this year, the fashion house launched Prada Journal (at the event, celebrated writers read from its first published works), as well as a new line of spectacles, also called Prada Journal.

The Transom needed no lenses to see the imposing figure of Oliver Platt take the stage to begin his hosting duties, first bringing up Mr. Ames, who featured the actor on Bored to Death. Mr. Platt called the writer “my old friend and spirit guide.”

Next up was Mr. McInerney. He was followed by Gary Shteyngart, who was also impressed by the outfitting.

“I’m told these are called ‘pants’ in the industry,” he said, gesturing toward his trousers.

The actress Zoe Kazan read next, followed by the actor Anthony Mackie. Then it was time for a proper party, as the socialites and middling designers arrived two hours late, conveniently missing the literary portion of the evening. Mr. Shteyngart, to his credit, stuck around, in spite of—or because of?—looming responsibilities at home.

The author took out his iPhone and tapped at the screen. Instead of a baby, however, the image was of two men sucking face.

“Oh, sorry, that’s a picture of me making out with James Franco,” Mr. Shteyngart said, referring to his former Columbia MFA acolyte. They appeared to be really going at it.

“Did James Franco use tongue?” we asked.

By way of demonstration, Mr. Shteyngart proceeded to extend his tongue with gusto, whipping it around Miley Cyrus-style.

As the night wound down, the literary and theater types and high-fashion social butterflies seemed to be co-existing nicely—or at least commingling, thanks to copious Champagne. Could these disparate worlds ever sync up completely? Could the prominent men and women of the stage and the page take to fashion with ease?

Not exactly. When we asked Mr. Platt whether he, too, received a tailored Prada suit, he sighed.

“I don’t know if they make them for big fellas,” he said. 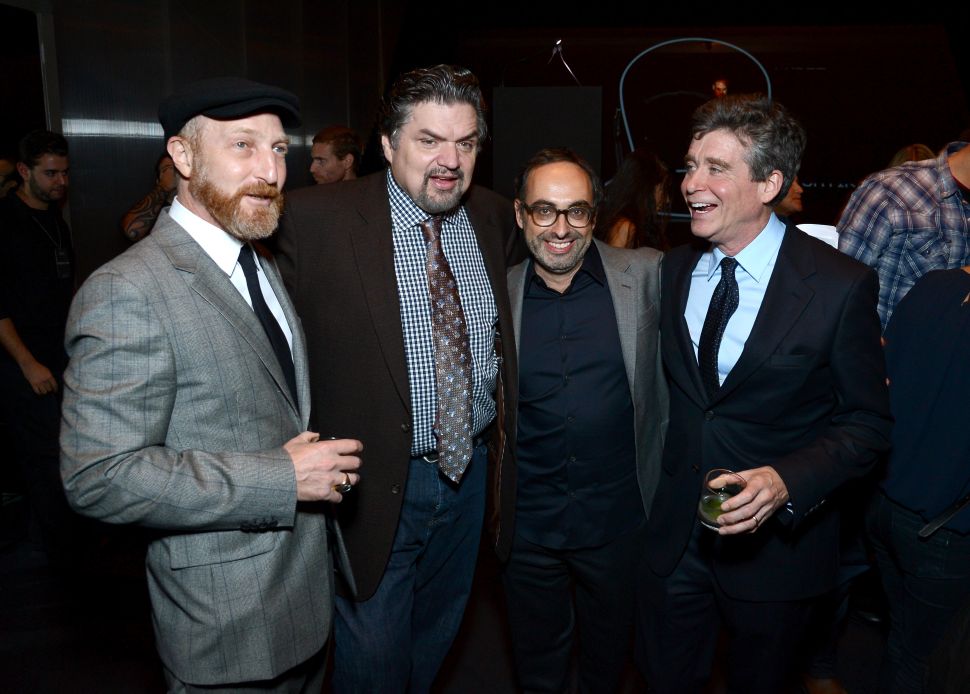