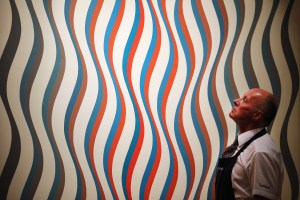 A work by Ms. Riley at Sotheby’s. (Courtesy Getty Images)

Mr. Zwirner told the paper that he plans to show the 82-year-old artist at his London space this spring. She has previously shown with the Pace Gallery and Karsten Schubert.

“Karsten remains her agent still,” wrote Zwirner spokeswoman Julia Joern in an email, stating that Zwirner will only show Ms. Riley in London.