By Mark J. Bonamo
JERSEY CITY – State Sen. Barbara Buono (D – Middlesex) came to the Brightside Tavern on Sunday down in the polls and down one newspaper endorsement – the Star-Ledger backed Governor Christie, noting numerous Democratic defections from their party’s standard bearer in the 2013 gubernatorial election. But on a day of perfect campaign weather, New Jersey’s highest wattage Democrat, Newark Mayor and U.S. Senator-elect Cory Booker, came to boost Buono 16 days before the vote, with Buono hoping that his unique brand of political pixie dust rubs off just in time.

“We cannot let the party of tea undermine the nation of we,” said Booker, four days away from his victory over Tea Party favorite Steve Lonegan in the contest to fill the late Frank Lautenberg’s Senate seat. “We cannot let the right wing take us the wrong way.”

Flanked by Buono, Democratic Lieutenant Governor candidate Milly Silva and Democratic State Party Chairman John Currie, Booker backed away from his cordial relationship with the governor to underline some significant points of policy divergence between Buono and Christie.

“The governor that we have has pulled us out of regional greenhouse gas agreements and yielded to the desires of many of those people in the corporate world that want to be able to pollute,” Booker said. “[Buono] has been standing up for the environment and for clean air.”

With same-sex couples around New Jersey set to legally marry just after midnight on Monday, Buono poked Christie on his stance against same-sex marriage, a position highlighted in the last gubernatorial debate.

“Our gay and lesbian brothers and sisters don’t need a hug. They just need to be treated like everyone else,” Buono said. “Now, my youngest daughter Tessa, who is openly gay and lives in California, can come home.”

Recent reports about the Garden State gubernatorial race would seem to indicate that the Buono campaign has stalled: the Oct. 17 Quinnipiac University poll indicated a 62-33 percent Christie lead among likely voters, and Sunday’s Star-Ledger editorial endorsing Christie called the governor “the most remarkable political talent America has seen since Bill Clinton.”

But Buono, who entered the fray against Christie when all other Democratic contenders shied away, felt “energized” by the presence of Booker, a politician whose potential many see as equal to that of Christie.

“People don’t remember, but Cory was one of the first people to endorse me,” Buono said. “Obviously, he had his hands full with the Senate race. We’re really glad that it’s over so that he can campaign with us.”

Booker left Jersey City to head to Fair Lawn, where he was scheduled to speak in support of State Sen. Bob Gordon, who is trying to hold on to his Bergen-based 38th Legislative District seat in the face of a stiff challenge from a GOP slate led by Oradell attorney Fernando Alonso.

Christie has specifically targeted Gordon in his drive to take Republican control of the state Senate, a coup that could shape the state Supreme Court for years to come.

“I am so tired of Bob Gordon, I can’t stand him,” Christie told a crowd at a Bergen County Republican Organization fundraiser in Hackensack in August, according to previously published reports.

“I love Bob Gordon, and I’m looking forward to supporting him yet again,” Booker said after the Buono rally in Jersey City. “We see what Republican-led state legislatures are doing all over the country right now. They are rolling back voting rights and crippling access to the ballot. I don’t want to risk that, even in a centrist state like New Jersey.” 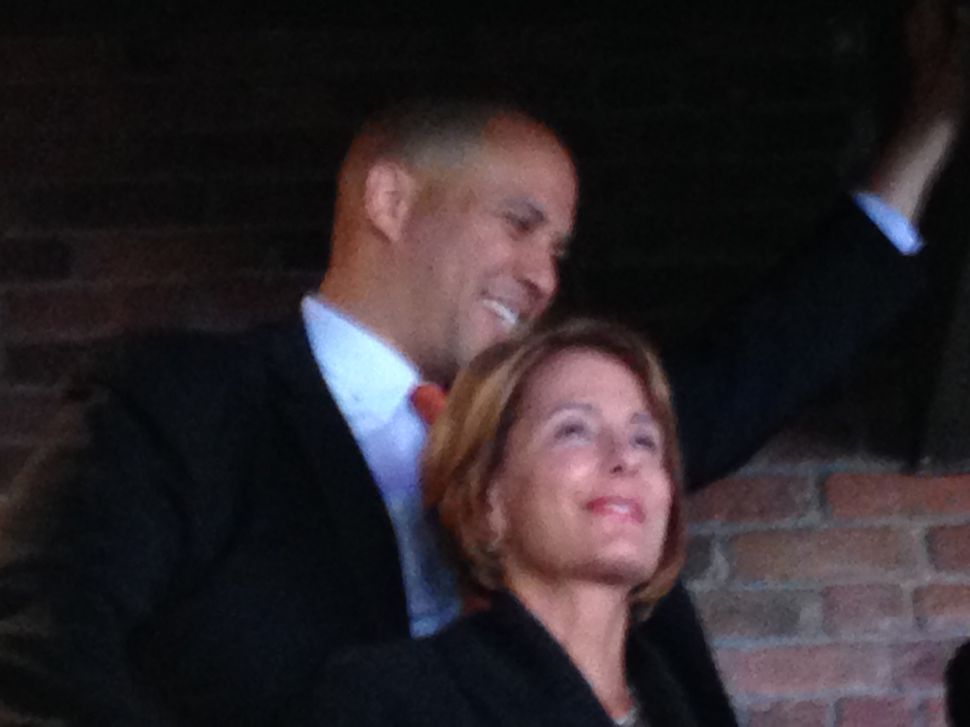