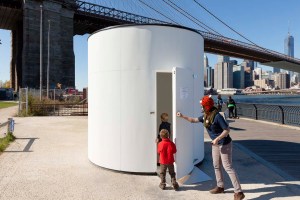 Topsy-Turvy, the cylindrical camera obscura that flipped the Flatiron Building when it debuted in Madison Square Park this spring, has reappeared in Brooklyn. Inside the nondescript-looking installation, a work by Sandra Gibson and Luis Recoder, a stretch of the Manhattan skyline is projected on the walls, wrapping around the viewer. Originally a commission from Mad. Sq. Art, the camera is currently situated in the Empire Fulton Ferry section of Brooklyn Bridge Park.

“Whereas the camera obscura install at Madison Square Park emphasized the topsy-turvy verticality of the surrounding Flatiron District cityscape, the current install at Brooklyn Bridge Park emphasizes the topsy-turvy horizontality of the lower Manhattan skyline, literally turning the NYC diorama 180 degrees on its head,” the artists wrote in an e-mail. “It is a radically different experience altogether—perhaps even a completely different public artwork altogether.” 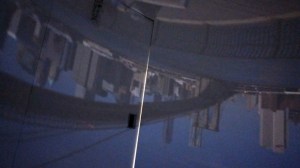 Inside the installation. (Courtesy the artists)

The installation, which was slated to close yesterday, just got extended through Nov. 10. Swing by during viewing hours (11 a.m. to 3 p.m. on Friday, Saturday and Sunday) as it may be the camera’s last public appearance. “We are currently negotiating with a private collector,” wrote Ms. Gibson and Mr. Recoder, “who is interested in installing Topsy-Turvy on their densely wooded property in Connecticut so that it captures a camera obscura portrait of their home.”