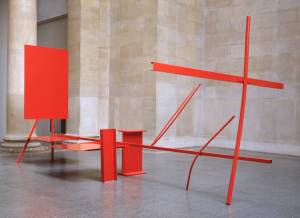 The British sculptor Sir Anthony Caro died of a heart attack on Wednesday in London. He was 89.  Through his work and his teaching, Caro influenced an astounding number of artists over many decades, including a few one might not at first expect.

Among those fans is the Los Angeles-based sculptor Charles Ray, who studied at the University of Iowa with Roland Brenner, who was a student of Caro’s. In 2005, Mr. Ray gave an excellent interview about the importance of Caro to his work for Tate Etc. magazine, and revealed that Early One Morning—a sculpture from 1962 in Tate’s collection—”is the work that I gauge myself by.”

Here’s more from the interview with art historian Michael Fried:

I’m still amazed by the experience of viewing Early One Morning. It is sculptural disjunction compressing and expanding in such a hallucinogenic way. The sculpture seems to be an armature that space clings to like clay. In 1962 The Beatles were singing “I want to hold your hand.” The hallucinogenic scene didn’t explode on to pop culture until five or six years later. Not that this sculpture was prophetic of the coming youth culture involvement with drug experiences, but it was so born in its time. It is so alive in its making that it seems unlikely ever to die.

Just awesome, right? Mr. Ray also talks about the model that Caro set as an artist, moving from figuration to his inimitable brand of abstraction in the 1960s.

If I could share with a young artist any aspect of Caro, it would be his openness to move from the 1950s into the 1960s. He took a small closed gesture embodied in his figuration and he made it open and expansive in his abstract art. To accomplish this he abandoned one sculptural genre and greatly extended another. There are lots of lessons to be learned from Caro’s sculptures: how they sit on the floor; their extension into space; the relationship of parts rather than an overall shape or profile; the emphasis on juncture. What’s harder, if not impossible, to grasp is how his work changed our orientation to the art itself.

Oh, and he also tells a great story about trying to convince Caro to let him photograph a nude woman sitting on Early One Morning. Caro “agreed in principle,” but it never quite panned out.