WOODBRIDGE – Gov. Chris Christie courted the Indian American community on a swing through Middlesex County this afternoon, while attempting to show up his rival state Sen. Barbara Buono (D-18) in her home district and reinforce his money gift to the Republican state Senate campaign of East Brunswick Mayor Dave Stahl.

“Even more than money, it’s the message,” said state Sen. Sam Thompson (R-12), chairman of the Middlesex County GOP.  “I need his help putting that message out there.

“We’re optimistic about 14 and 18 and hoping for a few surprises in other places,” Thompson (pictured, above) told PolitickerNJ.com in a bulldozed enclave of brick and stucco Indian retail stores hugging the trough of the highway.

The stop wasn’t technically in LD18, but right at the edge, in the Iselin section of Wododbridge, right above Buono’s home town of Metuchen.

The crowd spilled through double doors of the local Indian sweet shop onto the sidewalk.

A drum stood at the ready.

But Christie kept his fan club waiting for an hour and a half, leaving dutiful sidewalk squatters to cluster together and crane their heads with every incoming large-sized vehicle only to time and again end up with that crestfallen feeling.

“Here he comes!” a man called at the sight of what looked like a bus trundling down Oak Tree Road.

It turned out to be a flatbed hauling a trussed together bunch of port-a-potties.

Another man: suit jacket, officious, saw a lady in a car idling at a neighboring store and jerked a thumb.

“Out!” he said. “The governor’s going to be pulling in right here. Get out.”

The woman meekly threw the car in gear and complied.

That was an hour before Christie actually arrived at this crossroads, one of three legislative districts (14, 18 and 38) where this week he showed his willingness to play in an attempt to pick up GOP seats.

Two of the three have Middlesex footprints.

As the time ticked down earlier, Thompson took on the role of waiter-in-chief.

The chairman said he’s also optimistic about the Edison mayor’s race, where he happily shares his belief that Democrats are feeding on one another.

“We have a great candidate in Gaetano Gaspari,” the chairman said of the former Edison Township planner turned GOP mayoral candidate.

The candidate agrees with Thompson that they’re killing one another, and couldn’t be more delighted at the prospect of being the last one standing.

“But he did get after Toni Ricigliano for using his picture in her literature,” Thompson pointed out.

A car drove by at one point with a bare arm hanging out the passenger side window as the horn honked amid jeers.

Distinguished-looking members of the Indian-American business community gave interviews on the sidewalk all about Christie being the best candidate around – for president.

“What about governor?” someone asked and was waved away.

It was not a relevant question.

A moan of gears could be heard a block away and cops appeared, pushing the crowd back and up onto the sidewalk and the Christie bus pulled onto Oak Tree amid cheers.

Moments later, Christie stepped onto the mobbed sidewalk with the first lady of New Jersey.

Earleir today, Christie appeared in Bloomfield where there’s a competitive mayor’s race and Essex County Executive Joe DiVincenzo showed up in soldierly form to take the diner walk with the incumbent Republican.

A GOP source, speaking on condition of anonymity via cellphone through the hoopla on Oak Tree Road, fumed over the lack of love shown by the governor to GOP organizations during this cycle.

“President,” the source broiled. “He’s running for president. If he had shown up in September and worked with our organizations we might have actually won some seats, but we have candidates out there – forget about South Jersey – who haven’t gotten the face time or resources from the governor they could have used. This bipartisan message he’s pitching doesn’t help Republicans challenging entrenched incumbents and looking for contrast. There’s no anger out there. Love doesn’t motivate participation and create the atmosphere you need for a change election. Oh, well.”

The point came crackling through the wireless phone, far removed from the mood of the crowd. 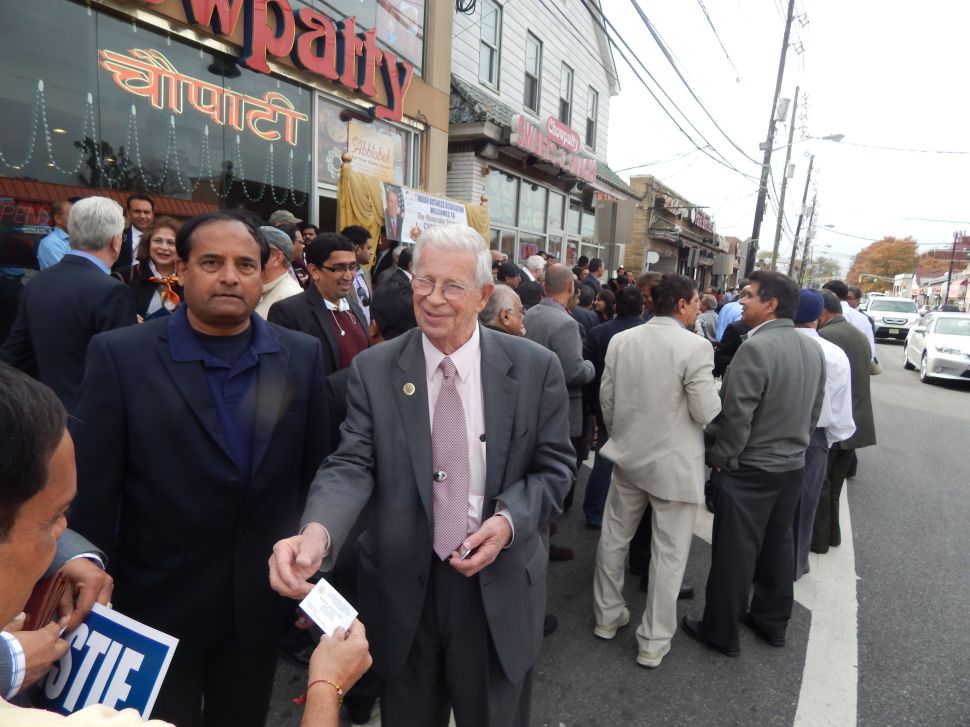