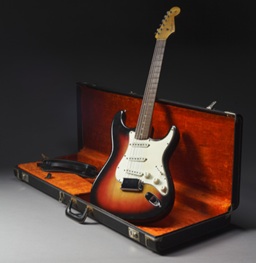 Christie’s has announced a small sale dedicated to Bob Dylan, the highlight of which is the Fender Stratocaster he played during his electric set at the Newport Folk Festival in 1965. It’s estimated at $300,000 to $500,000.

The guitar had been left on a private plane Mr. Dylan used in the months after the Newport performance, and was later found to be authentic by the daughter of the plane’s pilot on the television show History Detectives, according to Christie’s.

Also included in the sale are original lyrics from Blonde on Blonde-era songs “Absolutely Sweet Marie” (which here has the title “In the Darkness of Your Room”), “Medicine Sunday” and “Jet Pilot” (both of which didn’t make it onto the official album), and one other previously unreleased and untitled song. The lyrics were discovered in the Stratocaster’s guitar case.