After more than four decades of innovative and experimental art programming, the Clocktower Gallery will leave the space at 108 Leonard Street that it has called home since 1972. “Last year we learned that Bloomberg wanted to shed a number of fiscally improbable buildings,” said Alanna Heiss, who founded the gallery as part of a larger, radical movement to use city-owned spaces for art. “He has sold it to a developer who simply didn’t choose us as the amenity that he wanted for that building.” While the loss of its historic headquarters signals the end of an era, the Clocktower and ARTonAIR, Ms. Heiss’s Internet radio station with which it shares the 13th floor, are hardly fading away.

“We are going to be split up in a lot of different areas of the city and not at all shutting down the operation, but almost to the contrary, increasing it,” said the Clocktower’s managing director, Beatrice Johnson. The gallery and radio show are currently negotiating an “institutional residency” at an arts space in Brooklyn, opening a Manhattan office and are planning pop-up programming at various spaces as well as broadcasts from all over city. Ms. Heiss plans to release the names of these partners sometime next week.

For its last show at the former New York Life Insurance Company building, a majestic McKim Mead & White-designed landmark sided in white Tuckahoe marble, the gallery will present paintings and sculptural work by the late artist Dale Henry. Henry, who was once a staple of the New York art scene and participated in the inaugural “Rooms” exhibition at what is now MoMA PS1, left the city in 1986 for a small Virginia town on the James River. “It’s an investigation into what making art in New York City generally requires, what kind of war experiences you have as an artist in New York City,” said Ms. Heiss, to whom Mr. Henry bequeathed his work and correspondence. The show opens on Oct. 29, and will have a second iteration at Dustin Yellin’s Pioneer Works in Red Hook starting Dec. 7.

Ms. Heiss, who fundamentally transformed the city’s art scene in the early 1970s by staging shows in alternative, city-owned spaces, has “war experiences” of her own. She left MoMA PS1 in 2008, shortly after the Museum of Modern Art took control of its finances and appointment of board members. “At the end of my directorship of PS1…I returned to the Clocktower, my old stomping grounds, thinking I would just lay around and eat bonbons,” said Ms. Heiss. “But it was much more fun to work with artists.” She relaunched both the Clocktower Gallery and WPS1, the Internet radio station she founded while at PS1, under ARTonAIR, and in the next few years, the show’s audience tripled.

“I think for Alanna, leaving PS1 and coming to the Clocktower was almost like coming back home,” said Ms. Johnson, who worked with Ms. Heiss at PS1. “It was of course bittersweet because PS1 was at that point really her main project, but she was very excited to come back to the Clocktower, very excited to program the space again, and I think she’s approaching this transition with almost as much enthusiasm.”

Peebles Corp., the developer who purchased the building (also listed as 346 Broadway), paid about $160 million and will convert the 400,000-square-foot property into a boutique hotel and luxury condominiums. The sale was the largest city real estate deal with a minority-owned business, according to the New York Daily News. Throughout its 40-year history, the gallery has staged exhibitions by the likes of Gordon Matta-Clark, Lynda Benglis, Vito Acconci, Nam June Paik, Laurie Anderson, Christian Marclay and Marina Abramović, who is on the board, among many others.

The departure is “emotional for Alanna,” said Ms. Johnson, “but she’s such a force of nature she can’t be stopped artistically or programmatically. She’s really just using this as another opportunity to just do more programs in more places, more projects of varying ranges, work with more artists.” 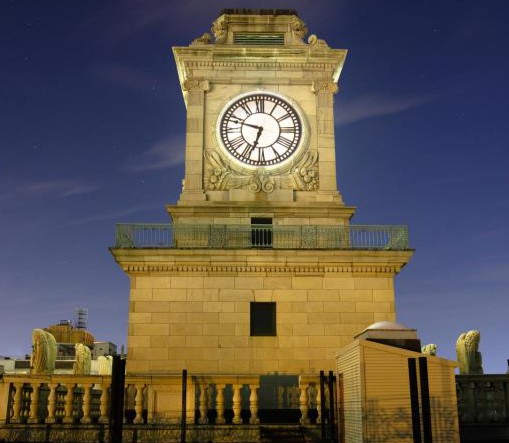