Public Advocate and mayoral candidate Bill de Blasio’s use of his government office to try and halt a lawsuit that would benefit his Republican challenger, Joe Lhota, quickly drew criticism today.

The legality of the limit has come under question following the Supreme Court’s Citizens United decision, which nullified the caps on contributions to such groups.

“Speaking broadly, what is involved here is the integrity of our electoral process,” reads the brief, released by Mr. de Blasio’s office.

“Deep-pocketed donors have turned their sights on New York and our best-in-the-nation campaign finance system. They’re determined to upend protections that have safeguarded our democratic process for decades,” Mr. de Blasio added in a statement. “This is about more than one election. It’s about defending the voices of everyday New Yorkers. It’s a fight we are going to win.”

The move immediately received fire from the Lhota campaign, which slammed the effort as “outrageous” and called on Mr. de Blasio to withdraw the brief.

“Mr. de Blasio is using his taxpayer-funded office to try and advance his own political career,” Lhota spokeswoman Jessica Proud charged in a statement. “It was bad enough he has used his position to get favors for political allies, but this is another disturbing example of him abusing his office to advance personal interests. He should withdraw it immediately.”

Michael Carvin, a Washington lawyer representing the PAC, piled on.

“It’s part of his ongoing effort to silence people who happen to disagree with him, which is why we have a First Amendment, to prevent public officials from silencing the voices of voters,” he said. “Even worse that he’s using public resources to help his own private campaign.”

But Mr. de Blasio’s government spokesman, Wiley Norvell, argued the effort was completely consistent with Mr. de Blasio’s previous work defending campaign finance regulations in his capacity as public advocate. The brief specifically notes, for instance, that Mr. de Blasio “has been a leading proponent of campaign finance rules,” pointing to a Mother Jones article that dubbed him the “Citizens United avenger” as well as to articles, speeches and “hundreds” of meeting, speak-outs and rallies Mr. de Blasio has attended across New York on behalf of the cause. “These issues have been at the core of his work as Public Advocate,” it reads.

The brief also specifically addresses the candidate’s decision to file through his government office. “Obviously,” it declares, Mr. de Blasio “would be directly harmed by unlimited spending in support of his Republican opponent.” But it argues that “the issues raised in this lawsuit go beyond a single election and cut to the heart of New York’s democratic traditions.” Although he would have had grounds to appeal in his capacity as a candidate, “he has chosen to appear in his role as Public Advocate to defend this broader point.”

“I think it’s a perfectly appropriate thing for a public official to do on government time,” he said. “It’s not about stopping a move to help his opponents, it’s his desire to keep big money out of New York City politics.” 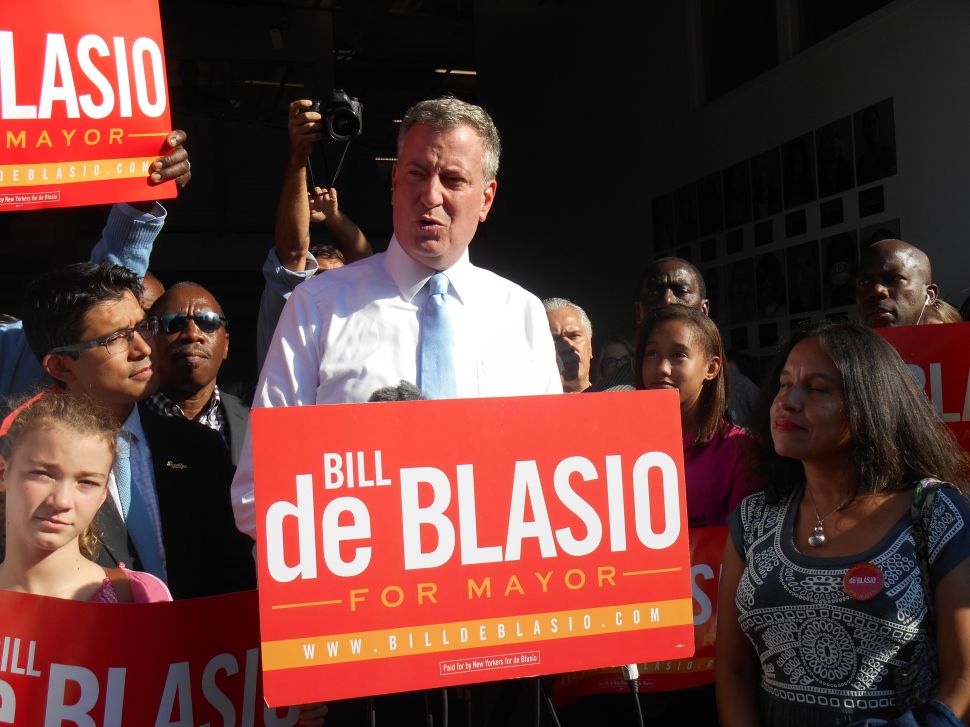