In an editorial published today, the tabloid slammed The New York Times for waiting until yesterday to cover the profiling allegations against Barneys and Macy’s that the News has been relentlessly pushing for a whole week. (This is despite the paper’s more conservative attitudes towards other forms of alleged profiling by the NYPD.)

But even with the Times crediting the News for first bringing the allegations to light, the tabloid’s editorial page found the delay simply unacceptable:

“Yes, the New York Times, where it had not been news that African-Americans had suffered police stops and arrests for nonexistent credit card fraud, that superstar Shawn (Jay Z) Carter was under pressure to sever a deal with Barneys, that the Rev. Al Sharpton had taken Barneys’ CEO to the woodshed and that the state attorney general had demanded answers from both stores.

The scathing editorial comes two days after the Times‘s public editor, Margaret Sullivan, investigated her paper’s lack of coverage on the allegations. In an email, Metro editor Wendell Jamieson told Ms. Sullivan it didn’t simply make sense for him to devote significant resources to “one of those cases where a competitor has made a campaign out of it.”

“We’ve read the stories and haven’t seen a way in for us,” he explained. “They have a he said, she said quality at the moment, and I’m not sure how we could get around that. We very well might write about it in the future, but there would have to be a smart way for us to move the story ahead, or a newsbreak — like a resignation or a major change in store policy.”

Ms. Sullivan disagreed, however, writing “the subject is a serious one – allegations of racial profiling – one that The Times has devoted plenty of its own resources to in the coverage of the city’s ‘stop-and-frisk’ police practices.”

The Times ended up covering the story this week, but the News was not satisfied:

“The paper’s metropolitan editor, who can remain nameless for charity’s sake, said the Times balked until it became too embarrassing to keep balking because the broadsheet simply had better things to do than chase a ‘campaign’ by the Daily News. Makes life easy.” 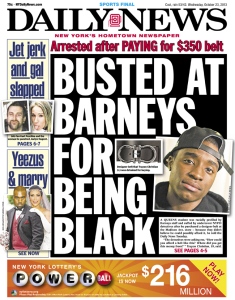