Bill de Blasio and Joe Lhota faced off in their third and final debate of the 2013 mayor’s race this evening, rehashing old arguments and trying to make their last pitches with less than a week to go before Election Day.

Throughout the debate, Mr. Lhota–who remains nearly 40 points down in public polls with Election Day looming–doubled down on his message that a Mayor de Blasio will take the city back to the bad old days of high crime.

“Anybody that believes that the accomplishments that have happened over the last 20 years are not fragile is kidding themselves. Crime can go back up again,” the Republican said, warning that the city is at risk of becoming the next Detroit or Chicago. “We are one bad mayor away from unsafe streets, continued failing schools and fiscal chaos,” he later charged.

After a relatively sleepy first hour, the attacks between the pair grew more pointed, as Mr. Lhota tried to highlight the differences between his and Mr. de Blasio’s résumés, painting Mr. de Blasio as a “naive,” life-long politician who had never run anything larger than a political campaign.

“He has absolutely no experience. Look at the mid-level jobs that he’s had,” charged Mr. Lhota, who served as deputy mayor of operations and budget director in the Giuliani administration and chair of the MTA. “You can’t compare my experience with his lack of experience.”

But Mr. de Blasio shot back, pointing to his stints managing Hillary Clinton’s first senate campaign and 12 years as an elected official–as well as his approach.

But perhaps the most colorful moment came as Mr. Lhota, angry over Mr. de Blasio’s attempts to tie him to the national Republican party, said the contest reminded him of the famous match between Rocky and Ivan Drago’s in Rocky IV, in which Rocky, the underdog, won.

“New York loves an underdog and quite honestly, I am that underdog. There’s no question about it,” he declared.

But in a scrum with reporters after the debate, Mr. de Blasio took issue with Mr. Lhota’s attempt to paint himself as Rocky in their metaphorical boxing match.

“I’m a big Stallone fan, so I actually personally relate to being the Rocky character,” he told reporters with a hearty laugh. “I started out as the underdog, for sure. I was the underdog for a long time, but once the momentum built, it’s never stopped. I feel very good about what’s going to happen on Tuesday.”

The Lhota campaign was apparently keen on the comparison as well and sent this photo to reporters shortly after the debate: 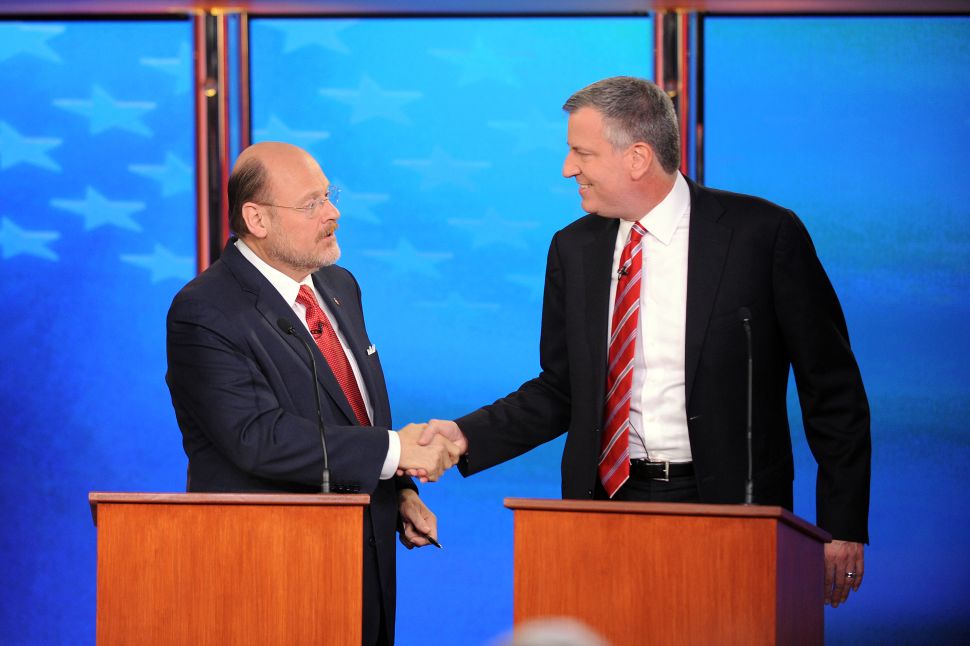