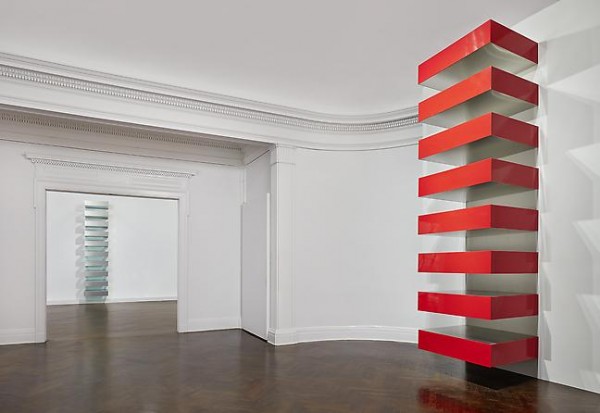 Donald Judd’s stack sculptures dominate galleries. Columns formed from 10 identical wall-mounted boxes in various metals and Plexiglas, each separated by a space that equals its height, they have always seemed to overpower neighboring artworks, brooking no aesthetic dissent in their rigid serial logic. They’re artworks to be admired at a safe, respectful distance, with some trepidation. But Mnuchin’s latest jewel of a show, which has 10 stacks (the most apparently ever assembled in one place) plus a single-box sculpture, feels like a  game changer. Surrounded by such profusion, that initial shock gave way, for me, to the peculiar pleasure of being in an alien art environment, suddenly, newly alive to the stacks’ rich offerings.

Judd had them fabricated throughout his career, from 1965 until his death 30 years later. They came in two standardized sizes, works with slightly larger boxes being reserved, at least initially, for public and museum displays. The earliest stack here is a 1968 set of boxes with polished stainless steel sides and amber Plexiglas tops and bottoms, which send wild orange cascades of light along the length of the stack when hit with light. Only the reflections and refractions of a 1980 copper and dark blue Plexiglas stack rival it, giving off a dense tangle of geometric colors that suggests a sci-fi Art Deco. 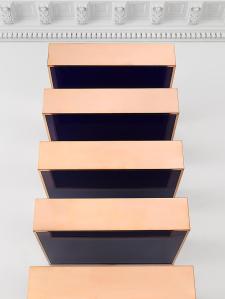 Think of them as etudes in design, or even architecture, in which variations in color and materials yield diverse outcomes. Violet anodized steel produces an almost aristocratic aura; large red Plexi pieces (steel on top and bottom this time) a kind of brutal joy. But Judd’s works are  more than formal exercises. In a catalog essay, art-market reporter Judd Tully quotes from a 1989 interview with Judd, new to me, in which the artist states with characteristic fervor, “I object very much when my work is said to not be political, because my feelings about the social system are in there somewhere. The idea is to have it all in there together—you can’t pull it out.” Take him at his word. While they’re no doubt exemplars of wall power, presented in such a large group, they also have to be seen as emblems of American imperial and corporate might, these industrial materials repetitiously cut into lines of boxes like so many products, prisons or computer server cabinets. They harbor energies, beautiful and dark. (Through Dec. 7)