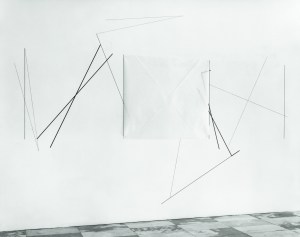 Your eyes may burn for a moment when you first enter this tight little survey of drawings by the still-underrated New Yorker Dorothea Rockburne. It’s because she has painted the walls a super-bright white and installed extra lights with a higher-than-standard wattage for the museum. Once your eyes adjust, though, you’ll be well prepared to take in a quiet, subtle stunner, one of the highlights of the fall season.

The focus is predominantly on works from the 1970s, when Ms. Rockburne was living in Downtown Manhattan and staking out territory in and around Minimalism, rigorously experimenting with the artistic potential of large sheets of paper. She folded the paper—carbon and butcher, vellum and plain white stock—and sliced it and marked it ever so slightly with graphite or ink. Grounded in systems of mathematics and logic (the golden section pops up), the resulting artworks impart a tough beauty that is ultimately tender in its attention to the minute details of texture and crease. The fact that she studied mathematics at Black Mountain College, best known as an incubator for radical artistic talents like John Cage and Robert Rauschenberg, nicely encapsulates her unique mixture of reason and play. 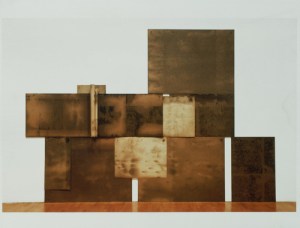 She could be bravely raw and almost funky, as in Scalar (1971), a spread of chipboards that she doused with crude oil, making a virtuosic array of spills and waves, or resolutely austere, as in her 1973 “Conservation” series, for which she cut 30-by-40-inch sheets of paper into various configurations, anagram-style. She also made instruction-based drawings on the wall and floor that include slices of paper and the errant fingerprints of their makers: They’re punk LeWitts. The show’s curators, Esther Adler with Ingrid Langston, have helpfully included handheld cards with Ms. Rockburne’s directions for these so that you can follow how they were made.

The show could not come at a better time. Artists today are experimenting with how their work reads in the digital realm, with special attention to the kinds of trace gestures in which Ms. Rockburne specializes. They’re thinking about process again, art made in situ with a dash of performance, and many—too many—are enamored of rigid, reductionist abstraction, whether Constructivist or Post-Minimalist in flavor. Ms. Rockburne, one is reminded, was gamely dealing with similar issues 40 years ago, making works that have aged exceptionally well. (Through Jan. 20, 2014)