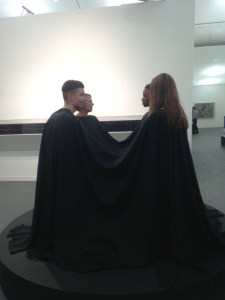 The Byars piece at Werner.

1. A 20 percent decrease in VIP invitations on the opening day of this annual fair (Oct. 16) was intended to make the atmosphere here somewhat quieter and more conducive to art viewing and buying, but the fair seemed to have the same energy as in past years. The usual power players were on hand, including Greek collector Dakis Joannou, and Norman and Nora Stone, collectors from California. “A higher percentage of the people we invited must have come this year,” said fair co-director Amanda Sharp.

2. The massive Dan Graham piece at Lisson Gallery’s booth, the only artwork the gallery brought to the fair, makes the strongest case for the single-artwork booth since Gavin Brown brought Urs Fischer’s cigarette box on fishing line piece to Art Basel Miami Beach in 2006.

3. Another gallery has taken the minimal approach to impressive effect. Gagosian Gallery’s booth, consisting simply of five large-scale works by Jeff Koons (sculptures and one painting), must have been the most photographed area of the fair on opening day. It would seem to make the argument that an art fair can be just as effective for image-bolstering and branding as it is for sales.

4. Also attracting crowds and a fair number of shutterbugs was a performance piece by the late James Lee Byars, at the booth of Michael Werner Gallery. Four in a Dress has four performers wearing a single garment, a black dress that resembles nothing so much as the smocks used by hairdressers. One performer’s haircut, combined with the robe, gave him the appearance of a tonsured monk. The piece was first performed at New York’s Green Gallery in 1968. Back then, viewers were invited to take turns donning the dress and performing it. Andy Warhol filmed the piece once, but refused to get in it.

A project by Lili Reynaud-Dewar.

5. The Frieze Masters fair, which Frieze launched last year across Regent’s Park from Frieze London and which covers art made before the year 2000, has been garnering praise in its second edition. Whereas Frieze London got smaller this year, Masters has expanded, adding exhibitors. (Asked if she has thought about exporting Masters to New York, where Frieze has a two-year-old fair on Randall’s Island, Amanda Sharp said that “a lot of galleries, I think, would be happy if we did. But we want to be sure the material is there to do it twice a year.”) Yesterday, some dealers could be heard making comparisons between the two events in London, and Frieze Masters, with its elegant decor, tended to come out on top. Not everyone approved of the changes made to the design of Frieze London. One dealer, who requested anonymity, groused about the new flooring, which is grey with the appearance of fiberboard, saying it looked dingy and felt flimsy, and remarked that if you rolled a golf ball from one end of the fair to another, he suspected it would at some point begin bouncing.

6. Nevertheless, sales were being made on VIP preview day. In the case of some galleries, they were robust. At the booth of L.A.-based Blum & Poe, dealer Tim Blum gestured around at works by Julian Hoeber, Takashi Murakami and others; he’d had some 10 sales in the first two hours of Frieze. At Michael Werner, director Gordon VeneKlasen said he was surprised at how well the gallery was doing, even in the $500,000 range—he’d already parted with pieces by Sigmar Polke and James Lee Byars—which he considers a high price range for a fair strongly identified with newer and emerging art.

8. Frieze, which launched in London in 2003 during a less event-driven time in the art world, is now part of a crowded international art fair calendar. One often hears talk of “art fair fatigue.” Asked about that malady, Ms. Sharp said she was pleased that Frieze London and Frieze New York have developed such strong identities, New York in a relatively brief period of time.  Regarding the future of art fairs in a fair fatigue age, she said, “It’s inevitable that there will be a consolidation eventually. There will be fairs that remain international fairs and fairs that become more local and not necessarily bad for it.” 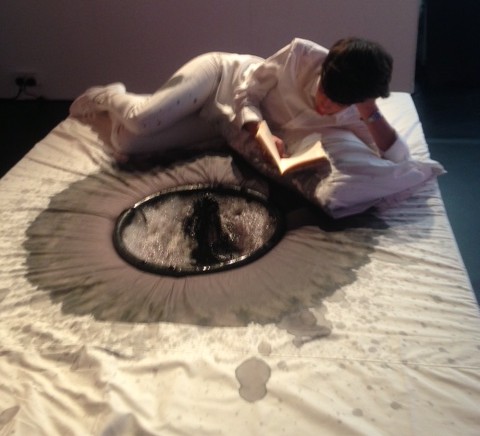