A veteran leader of the party who had the respect of different factions in an often divided Essex, and in all corners of an extremely diverse county, Mr. Thigpen was 87.

“He died with his boots on,” said Assemblyman Tom Giblin (D-34). “He was at our legislative breakfast yesterday and at the Steve Adubato event later. He was a good man.”

That is a common sentiment regarding the party standard bearer for nearly a decade and former track star from East Orange, a close friend of the late U.S. Rep. Donald Payne’s (D-10) and the consummate old school party chairman.

John Currie, Chairman of the New Jersey Democratic State Committee, as well as the Passaic County Democratic Committee, issued a statement on the death of his friend and mentor.

“Today, New Jersey Democrats, and me personally, have lost a dear friend and ally, Essex County Democratic Committee Chairman Phil Thigpen. News of his passing is a shock to us all, and we send our heartfelt condolences to the entire Thigpen family,” Currie said. “The organization that Chairman Thigpen built is a battleship in our Democratic fleet. He was a true champion for middle-class families, and a New Jersey where everyone has an equal opportunity to thrive. With just a week until Election Day, Democrats in Essex County and around the state will press toward victory with him at the forefront of our minds, fighting for the causes he believed so deeply in his entire life.”

An African-American leader, Mr. Thigpen took a special joy in the 2008 victory of President Barack Obama, telling a roomful of Democrats just before the election that if Obama didn’t win, he didn’t think he would ever get the chance to see an African American serve as the President of the United States.

The highly regarded party chairman attended his first Democratic Convention in Atlantic City in 1964, where he helped President Lyndon Johnson, the Texan with a realpolitik streak matched by few government players in modern American history.

Obama lacked Johnson’s backroom political skill, but he’s better than he was when he first became president, Mr. Thigpen told PolitickerNJ.com in 2012.

“I think he’s learned not to be so believing in the goodwill and good nature of all people,” the chairman said.

Mr. Thigpen was the “straw that stirs the drink” in Essex County, according to East Orange Democratic Chairman Leroy Jones.

That is how Jones introduced Chairman Thigpen at all Democratic Party events.

Party people had a particular affection for the chairman, who had an ironclad respect for Democratic Party organization and chafed at the notion of people who had not paid their dues to the Democratic Party ascending past others who had long bled for the party cause.

Stars who showed up at his office seeking his support for higher office usually received his advice to go get elected at the local level first, or better yet: get some ward level organizing experience.

Amid party squabbling and efforts by different factions to land a new chairman in 2008, Mr. Thigpen confirmed that he would pursue another term as chair.

“We’re going to go again,” he said in his office at the Robert Treat Hotel.

North Ward Democratic leader Steve Adubato confessed at the time that he had backed down from a power play that would have removed Mr. Thigpen.

Adubato had wanted to replace the two-term chairman with a close ally.

“Nobody agreed with me, even Joe D. (Essex County Executive Joseph DiVincenzo),” said Adubato. “I realized if (my candidate) ran, whether she won or lost, it would split the party, and we’re not going to do that.

“Our chairman is a helluva guy,” Adubato added. “We’re going to have to give him a lot more support. Maybe it’s our fault.”

“Philip Thigpen was a remarkable individual who continually fought to break down racial barriers in the community and the Democratic Party,” the county executive said. “His competitive nature and drive as a national track champion in his high school and college years served him well in his various roles as a community advocate, public servant and elected official. A gentleman with a kind heart, he provided stability and solid leadership as our Essex County Democratic Chairman. He was a good friend, mentor and confidant, and someone I will miss greatly.”

Throughout his chairman’s tenure, which began in 2004, Mr. Thigpen was beloved in party circles.

To the end he was an engaging conversationalist, casual and tolerant; passionate about politics while maintaining his reputation as a gentleman in all weather.

“I tell you, the country progressed faster than I thought it would,” Mr. Thigpen said last year, reflecting on the arc of history between 1964 and 2012.

The chairman’s annual dinner was scheduled to take place this evening in West Orange.

“He was a dear, dear friend,” Gill said. “He gave me my start in public life. I would not have the opportunity to serve without his support. It is a huge, huge loss. He was not only a gentleman but he was a true leader.”

“This is a sad day for many,” said GOP Chairman Al Barlas. “Forget politics, he was a genuine class act. He had seen and lived it all. I enjoyed our lunches where he would just talk about all the history he had lived. The thoughts and prayers of so many of us are with his family today. We lost a lion today.”

“Chair Thigpen was a man who commanded respect,” sad state Sen. Kevin O’Toole (R-40). “He brought a unique and wise perspective. He will be missed and our thoughts and prayers go out to his entire family.”

Tonight’s chairman’s dinner has been postponed. 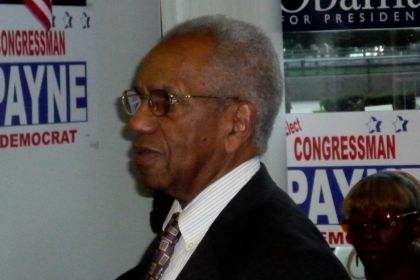