At dusk, I find myself at the end of Pier 25, past the miniature golf course, overlooking the Hudson River. I can’t seem to find New Jersey’s giant Colgate Clock, the once constant face that accompanied my childhood bike rides through Battery Park City.  Searching the shoreline, I think I make out its skeletal frame, a hollowed octagon with no hands. Googling reveals that it appears to have been destroyed by a fire.

I am flooded with so many memories and reach for my life raft, Instagram, and take a picture of the dark water, streaked with quivering lights from far off buildings. I’m impressed by my photo’s moody shades of blue. On my post, I include the hashtags #nofilter, #westsidehighway and #dusk.

My phone buzzes. Teddy Gold, my once latent L.A. lover, liked my photo. I’d love to think he can’t get me off his mind, but I heard he’s seeing someone. I guess they’ve made it past texting.

Will I ever get a chance to fuck him? I should really up my standards.

A couple runs past me. Panicked, I throw my head into my hands. I’m pretty sure that was Richard. He has a girlfriend now, and unfortunately I know exactly what she looks like, since I’ve spied on her on patrickmcmullan.com. They’re really fast runners with great form, and she’s all put together in her Lululemon spandex. But as I study his body, I decide it’s a look-alike. This man is a little too short and a little too blond.

I was 24. He was much older. He was everything. Richard is the backdrop that has informed every relationship since.

I don’t blame him. At least, I don’t think I do. Life was a race to be won, and the reward was his approval. I got so good at smiling my mouth got sore, and that time became so dark it’s hard to distinguish its shape in my memory.

I turn to Instagram again. I’ve lost two followers. What was so offensive about the Hudson River? Maybe I just need to stop posting pictures, so I don’t upset anyone.

I try for another one, snapping several shots of myself, moving my head around to find the best angle, but my face appears sunken and sallow. I can’t decide if I look sultry heroin chic or if I resemble Edvard Munch’s The Scream. Even with a more flattering filter, I decide it’s the latter. I give up my attempt at a selfie and put my phone in my pocket.

Off to the side of the path, there is an area paved with small pieces of broken glass. On our first date, Richard and I stood on a sidewalk that reflected fragments of light.

“I had a really nice time,” he whispered. “Me too. I’m glad you speak English. My ex was Italian, and we could only communicate through the language of love. Tonight, I left my dictionary at home.”

The Dartmouth grad chuckled, “I’m not so sure that’s a compliment, but I’ll take it.” He stepped closer. “Can I kiss you?”

“Yes,” I caught a glance of the glittering pavement below. “We’re sparkling.”

Finding an expanse of grass, I take off my sneakers to cool my feet. I’m on my back and can see specks of stars—not many, but enough to carry me from thought to a quieter place for a still moment. My head falls to the side, and, in front of my nose, I find a three-leaf clover with a belly full of water. There’s something about the way New York City glows in the nighttime heat that makes me feel alive. Sometimes, I think if I had spent any more time in my beautiful California I might have fallen asleep.

On our second date, Richard sent a car service to pick me up and took me to my first movie premier, starring Tom Cruise. I met him at the Ziegfeld Theater wearing borrowed designer clothes and wobbling in high-heeled gold sandals I bought earlier that day on sale. I tried to keep up with him as I was whisked into his world, the upper echelon of New York society. A real estate mogul, Richard had his hand in investments from restaurants to entertainment, and everyone seemed to want something from him.

I spent that summer working at Alexis Bittar selling jewelry to old ladies on weekends, while he escaped to his house in East Hampton. I’d see him in the social pages and get jealous, not of other women, but that I wasn’t more like him with his money, notoriety and enviable invites.

One September night, we sat naked in his Jacuzzi, legs intertwined.

“You’re a bubble girl,” he joked with a handful of bubbles. “It’s like you’re from another planet.”

“It’s probably because I grew up without a television. I never watched The Wonder Years or Alf or any of those other shows.”

He put his foot on my breast and pinned me into the back of the tub.

“When do you think you’ll move out?”

“It’s embarrassing to be a CEO of a company and date a girl who lives with her parents.”

“I’ll start looking when I get paid from my commercial.”

“It’s just if I don’t mention it, it doesn’t get done,” he persisted.

“I don’t want to talk about it right now.”

He pulled me into him, and his hand made its way down my stomach below the bubbles.

“Your body is looking amazing by the way.” I stand up directionless and can’t decide if I should keep walking toward Battery Park City, but the wind is wild, and I’d still have to walk all the way back. My legs are cramping, and I’ve already taken two sitting breaks. I’ve gotten so used to traveling by car in L.A.

More runners with strong bodies sprint by, and a helmetless Citi biker, wearing jeans and a dress shirt, swerves around me. I want to yell out, “You’re on the pedestrian side, you moron!” but he’s already a ways away.

“This is how accidents happen. I’ve got to be in the present moment and pay attention,” I tell myself.

In the mornings, I’d watch him get dressed from his bed. He’d put on his suit. I’d help him pair a tie with his shirt. I’d throw my arms around him as he’d lace his dress shoes, and he’d have to peel me off.

Once he asked, “What’s your plan of attack today?”

“I have two auditions,” I lied.

“Oh, good. Let me know how they go,” he said as he looked for his wallet. “I know you’re set on being an actress, but you should have a backup plan. What about becoming a hot wine chick, the female Robert Parker?”

“I’ll think about it,” I said rolling my eyes.

“I’m serious. No woman has cornered that market yet.”

“Maybe.” I didn’t know anything anymore.

“You really need to plan ahead. If you haven’t made it by 28, then it probably won’t happen.”

“It’ll go by faster than you think.”

As the heavy door to his Chelsea apartment slammed shut, I went into his downstairs bathroom and weighed myself. I was shrinking. Good.

I climbed back upstairs and straight into his bed for just five more minutes. As I bargained for more time, I heard his voice and sprung up.

He brought me my favorite muffin and a latte.

“Special delivery, delivery for me!” I hid the weight of my sadness with a smile. He could be so sweet.

Richard kissed my forehead, “Now I’ve really got to run, but kick ass on your auditions today.”

On my walk home, I bought the Post and glanced at Page Six. I had just started getting checks in the mail from my Johnson & Johnson skin lotion commercial, so for the moment, I didn’t have a side job, and auditions were slow.

I arrived at home to find my mother painting. Brushes in hand, she said, “Hello.” If I could have spouted out commentary at dinners or at Peggy Siegal after-parties, I might have impressed him. So I took to reading The New York Times religiously to memorize news facts, as if I were studying for the SATs.

Surrounded by highly influential adults over 40, I’d try to regurgitate phrases from the editorial section, a few lines from Maureen Dowd, Paul Krugman or Gail Collins. But when the opportunity arose, I’d freeze. Voices would float past me, shifting shape until I couldn’t find my way back in.

Walking home from a dinner at Blue Ribbon one evening, Richard said, “Sometimes, you come across ditzy, like you’re out of it. Even the woman from last night noticed.”

“Really? What did she say?”

She was a big-time talent manager who I was secretly hoping would represent me and, if nothing else, at least like me.

“She said you seemed … really young.”

“Well, I am young,” I said defensively.

“Then why are you dating me?”

“Because I see your potential.” He reached for my hand, but I pulled it back.

“Are you in love with me or my potential?”

We stood on the corner of Clarkson and Hudson Streets next to a brightly lit baseball field where I played soccer when I was 8. A woman stood in its center, watching her dog sniff patches of spotted brown grass. He found the right spot, lifted his hind leg and pissed.

“I’m in love with who you will become.”

The gusts of wind are getting stronger, and I try not to eat my hair.

I pass by the parking lot off Pier 40 where my father used to keep his pickup truck when the prices where still cheap and all the cars would get covered in pigeon shit. There was a ramp that we’d sprint down, side by side, my small sandals flying. Once, we even carved our initials into the wet cement on a small island separating the West Side Highway, before there was a lane for bikers. Just north of Canal Street, we’d pass a fenced-in lot with barbed wire, filled with old semi trucks and snarling Dobermans. I never understood why anyone would want to break in there in the first place. This was back when art galleries lined Soho streets.

It’s pouring rain now. I could make a run for it and hide under an awning but decide against it. Tonight, I’m going to surrender, drench myself in the rain’s wet embrace and step forward into my new New York life and into who I have become. 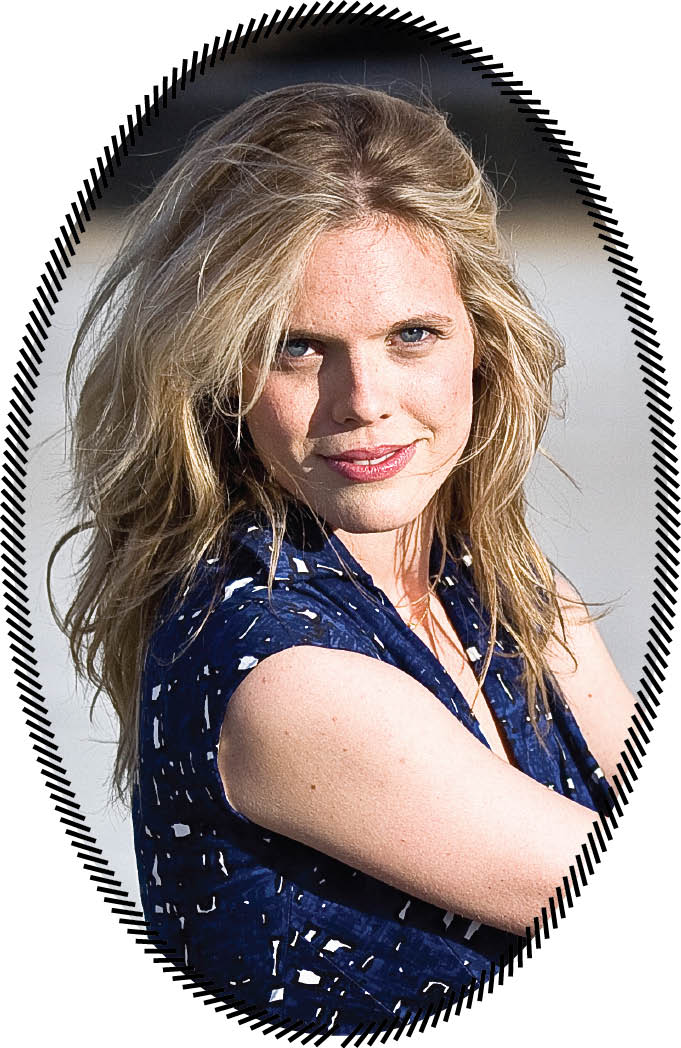