Extell’s plan to cantilever over the Park Avenue Christian Church didn’t work out so well—neighbors and the Landmarks Commission kind of freaked out over the developer’s plan to build a 210-foot-tall condo tower that would wrap about the historic church’s spire and block a wall of stained glass windows. Extell has since backed off of the Park Avenue plan, promising a less controversial design by preservation experts Beyer Blinder Belle. But that doesn’t mean the developer is giving up the dream of cantilevering over a landmark—and this time it’s the Art Students League.

Tonight, the Landmarks Committee of Community Board 5 will consider Extell’s cantilevering plan, reports luxury real estate chronicler Michael Gross. Mr. Gross, not a fan of Extell after the whole One57 crane fiasco, spotted a poster about the meeting, to be held, somewhat strangely, in Xavier High School at 30 West 16th Street.

The second item on the committee’s agenda, the plan is described thusly: “American Fine Arts Society – 215 W. 57th Street. Application to permit adjacent new building to be constructed at 217 W. 57th Street to cantilever over the Western portion of the landmark site beginning at approximately 290 feet above the grade of the sidewalk.”

The property at 217 W. 57th Street is, of course, Gary Barnett’s 1,500-foot-high tower, which will rise higher than the Empire State Building and along with Mr. Barnett’s other residential tower, One57 and Macklowe/CIM’s 432 Park, dominate the skyline on the southern edge of the park. Designed by Smith + Gorden Gill Architecture LLP, the tower will include a Nordstrom in the base, a hotel and, of course, super high-end luxury condos.

From the renderings of the base and the bird’s eye view of the site obtained by Mr. Gross,  the building would appear to be kind of “meh”—in fact, we momentarily thought that it was one of Extell’s other luxury residential towers—but it’s hard to tell when you can’t actually see the sky scraping part of the skyscraper.

As for the Art Students League, they sold their air rights to Extell in 2006, so we imagine they’ve just been biding their time, patiently waiting to be overshadowed by some hulking tower ever since. 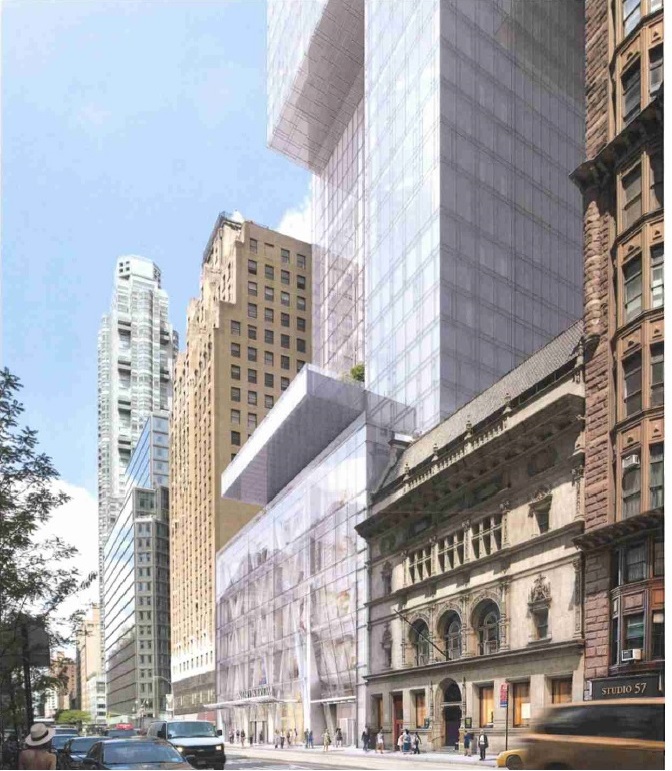