Science fiction flicks about NASA pioneers lost in outer space are a dime a dozen. But cool special effects, applause-milking technical bravura and advance film-festival raves make Gravity more highly anticipated than usual. For the most part, it lives up to the hoopla. It’s a thrill ride in an amusement park for kids and eggheads alike. Think Epcot with a touch of the Coney Island Cyclone. The ride takes just a beat or two more than an hour and a half, and you get your money’s worth. But forget about words tossed around by critics with hyperthyroid gush like “brilliant,” “visionary” and “groundbreaking.” It is none of those things. Gravity is nothing more than a classy work of 3-D entertainment and, since everything moves in slow motion, not a very lively one at that.

The setting is an American space station floating around the planets like a ball of cotton. No oxygen. No sound. No one can hear you scream. The view is great, and the silence is relaxing. But terror awaits. When astronaut George Clooney transmits the message, “Houston, I have a bad feeling about this mission,” you better believe him. Suddenly, the shuttle is assaulted by flying debris from a Russian spy satellite traveling faster than a high-speed Internet connection, and the U.S. mission is totally aborted. State-of-the-art scientific equipment worth billions of dollars is destroyed. Communications in Houston face a blackout. Worst of all, the entire crew is tragically killed except for two astronauts—the veteran mission commander (Mr. Clooney) and a lady research scientist with only the most basic skills (Sandra Bullock)—who are left stranded together in the cosmos, trying to get back to Mother Earth. Initially antagonistic, the wisecracking chauvinist flirt who hums pop tunes from inside his space helmet and the no-nonsense lady pragmatist who finds him unbearably annoying must learn to depend on each other for shared knowledge, trust and moral support. Only one will survive. Three guesses which one—and the first two don’t count.

So there you have it—the entire plot of a formulaic disaster movie with two stars who communicate from space suits that cover everything but their faces. They only have one scene together as the Bullock-Clooney team, and it takes place in a dream sequence. Still, they manage an uncanny rapport through words. The action is restricted to clinging to the sides of a spaceship, and the dialogue consists largely of stuff like, “Prepare airlock for arrival,” “Report your status—give me a reading!” and “Explorer, do you copy?”

Gravity nevertheless keeps you hooked. This is not a movie about acting, but the co-stars are in fine form. Ms. Bullock’s usual unruffled demeanor is perfectly suited for the doctor she plays here, and Mr. Clooney exudes his usual mischievous charm, even stuffed into a cushioned space suit that looks like an oversize oven mitt.

Mexico’s Alfonso Cuarón, who directed both Harry Potter and the Prisoner of Azkaban and gruesome futuristic thriller Children of Men, uses his vast experience with nail-biting 3-D effects to create sequences that are scary and delightful at the same time. The long opening section where the junk hits the space station is first-rate, and the wafting, weightless shots of bodies in space really convey the feeling of what it must be like drifting in the cosmos. When Mr. Clooney reaches out to catch a floating lug nut, you cower in fear that he’s going to grab you by the throat. It’s the humor that makes this movie rock, not a lot of pretentious gumbo about the mysteries of outer space or the philosophical pandering Stanley Kubrick was famous for. The critics who compare it to 2001: A Space Odyssey are delusional.

Accept Gravity as pure, popcorn-munching show business fun and nothing else, and you won’t go away disappointed. Leave logic at the concession stand. After Mr. Clooney cuts himself loose to save his partner in a gesture so noble you don’t know if it’s heroic or insane, what began as a two-hander in Flash Gordon costumes turns into a one-woman monologue, and Ms. Bullock is left alone to spend the rest of the movie talking to herself, locating a Chinese spaceship with controls that might get her home (how would she know, since the voices and instructions are all in Mandarin?), climbing through explosions and fires inside the space craft, manually expanding her dwindling oxygen supply and reaching mission control in a foreign vessel with nobody to instruct her in English. For a medical engineer on her very first shuttle mission, she’s just the kind of gal you want playing around with your broken telescope. The preposterous miracles she performs in the script, written by Mr. Cuarón and his son, Jonas, are not even peripherally believable, but Gravity is, as Bullock says, “one helluva ride.” 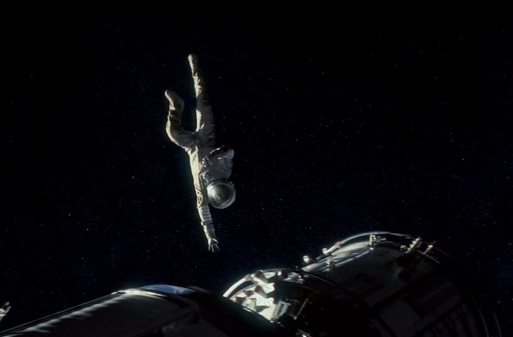