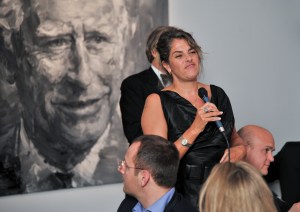 A couple weeks ago, Sotheby’s sold Chinese painter Zeng Fanzhi’s painting The Last Supper for $23.2 million. The consignor was Belgian collector Guy Ullens who, with his wife Myriam, is the founder of the Ullens Center for Contemporary Art in Beijing. The other night, here in London, Sotheby’s was once again with the Ullenses, this time hosting an auction and dinner to benefit Myriam Ullens’s Mimi Foundation, an organization dedicated to improving the lives of cancer patients. There were eight pieces in the charity sale, which totaled £1.3 million ($2.1 million), and was notable for the gusto with which it was conducted by Simon de Pury, who started things off by advising that everyone “just ignore” the estimates on the artworks, which he characterized as “ridiculously low.”

Apparently following that instruction to the letter, American collector Raymond Learsy bought a small sculpture by Ugo Rondinone, called Wednesday, for £25,000, triple its estimate. “For the fantastic lady in your life!” Mr. de Pury exclaimed. (That would be Whitney Museum trustee and accomplished philanthropist Melva Bucksbaum.)

The general hilarity only increased when Tracey Emin’s artwork, a neon piece reading “The Kiss Was Beautiful,” came up for sale. Ms. Emin, who was in attendance, rose from her seat and joined Mr. de Pury, remarking to the room of the auctioneer, who until recently headed up Philips auction house, “For a man who is unemployed at the moment, isn’t he brilliant?” She then promised to make a portrait drawing of whoever bought the neon. “Dressed or undressed?” a man called out. “Any way you’d like” was the answer. After lively bidding, the neon sold for £122,500. A Sterling Ruby went for £225,400, with Mr. de Pury commenting that the artist’s new studio, in Los Angeles, will be “the biggest artist studio ever.”

Things drew to a close with Yan Pei Ming’s painting of Prince Charles, which sold for 302,500 pounds.