TRENTON – Troy Stevenson could not stop crying for joy.

The head of Garden State Equality – already overcome with emotion at seeing same-sex weddings taking place after midnight, was absolutely bowled over by this morning’s news that the Christie administration will stop fighting gay-marriage advocates in court.

“I can’t quit crying,’’ Stevenson said moments ago. “It’s been a decade of fighting and it’s over.  Couples are getting married and nobody can take that away from them.”

Christie announced this morning the state will withdraw its N.J. Supreme Court appeal of same-sex marriage.

“He lost it,’’ Stevenson said of Christie’s fight against gay marriage. “It’s very clear that not only was public opinion on our side, the law was on our side.  It was the right thing to do,’’ he said of the state’s decision.

Asked whether Christie made a decision that was more political – with an eye toward a presidential bid in 2016 – as opposed to legal, Stevenson said, “I would like to think that he saw the humanity of the situation, and saw the loving couples that got married last night, and saw the joy and no longer could stand in the way of it.

“I thought we had a couple of more months of fighting,’’ Stevenson said, choking back tears, in reference to arguments before the high court and in the legislature with an attempted override of Christie’s veto of the gay marriage bill. “I thought we were going to drag it out.’’

Instead, Stevenson said, they have won a key victory. 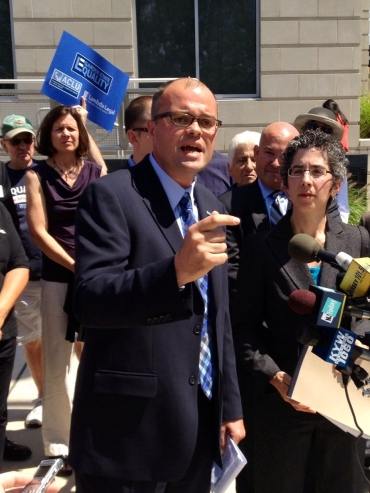