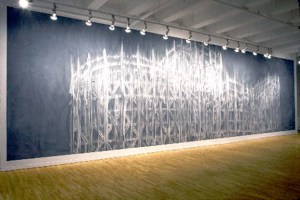 A work by Simmons. (Courtesy Wikipedia)

NEW YORK, NY, OCTOBER 25, 2013—The Studio Museum in Harlem has awarded the eighth annual Joyce Alexander Wein Artist Prize to Gary Simmons. The Wein Prize, one of the most significant awards
given to individual artists in the United States today, was established in 2006 by jazz impresario, musician and philanthropist George Wein to honor his late wife, a long-time Trustee of the Studio Museum and a
woman whose life embodied a commitment to the power and possibilities of art and culture. The $50,000 award recognizes and honors the artistic achievements of an African-American artist who demonstrates
great innovation, promise and creativity.
Inspired by his wife’s life-long support of living artists, George Wein envisioned the Wein Prize as an extension of the Studio Museum’s mission to support experimentation and excellence in contemporary art.
Director and Chief Curator Thelma Golden and more than 700 guests will celebrate the eighth Wein Prize at the Museum’s Gala 2013 on Monday, October 28, 2013.

Gary Simmons was born in New York City in 1964. He received a BFA from the School of Visual Arts in 1988 and an MFA from the California Institute of the Arts in 1990. After his tenure at Cal Arts, Simmons returned to New York and set up his studio in a former school building, where he found himself clearing away blackboards to make space for his sculptures. Soon after, Simmons began his first series of chalk drawings on blackboards, focusing on the development of racial, class and cultural identities in educational settings. This work paved the way for Simmons’s signature “erasure” technique, in which he smudges his chalk drawing with his hands or body, rendering their imagery ghostly and uncertain. While Simmons is widely known for the erasure drawings, he has often defined himself as a sculptor and has consistently worked across media, ranging from wall drawings and sky writing to found objects and fiberglass.

“Creating art that is honed from a conceptualism that pays homage to minimalist practices of the 1970s and reinvents identity-based explorations of the 1980s, Simmons came of age aesthetically in the 1990s and his work represents the fluid hybridity of that time,” wrote Thelma Golden in the exhibition catalogue Gary Simmons (2002). “He entered this cacophonous conversation with an arsenal of images that refer to both high and low culture, images that are significant in terms of their obvious embrace of real and readable content as well as their allegiance to the power and beauty of pure form.”

Over the course of a career spanning more than two decades, Simmons has built this arsenal into a powerful and profound visual vocabulary, leveraging the potency of familiar images as well as drawing from imagined spaces. A recent body of work draws on a lifelong passion for sports, incorporating drawings of 1930s posters for the historic boxing matches between Joe Louis and Max Schmeling. These and other works are featured in the comprehensive monograph Gary Simmons: Paradise (Damiani, 2012).

In addition to his 2002–03 solo show, co-organized by the Studio Museum and the Museum of Contemporary Art, Chicago, Gary Simmons has been featured in Studio Museum exhibitions including The Bearden Project (2012), Collected. Vignettes (2011), 30 Seconds Off an Inch (2009–10), and Collection in Context (2008). His work has been widely exhibited around the world, including in one-person exhibitions at The Modern Art Museum of Fort Worth; The Bohen Foundation, New York; and The Philadelphia Museum of Art. His work is in the collections of the Hirshhorn Museum and Sculpture Garden, Washington, DC; the Museum of Modern Art, New York; the Philadelphia Museum of Art; the San Francisco Museum of Modern Art; the Studio Museum; the Whitney Museum of American Art, New York; and the Walker Art Center, Minneapolis, among others. Simmons’s commitment to creating work in public space is evidenced in two major commissions, Reflection of a Future Past (Black) (2009) for the New York Presbyterian Hospital and Blue Field Explosions (2009) for the Dallas Cowboys Stadium.

Along with Gary Simmons, the Joyce Alexander Wein Prize has honored the work of and facilitated the artistic growth of seven previous recipients: Jennie C. Jones (2012) Leonardo Drew (2011), Leslie Hewitt (2010), Glenn Ligon (2009), Nadine Robinson (2008), Trenton Doyle Hancock (2007), and Lorna Simpson (2006). The prize’s direct cash grants to artists, now totaling $400,000, has had an unprecedented impact on contemporary African-American art.
George Wein met Joyce Alexander at a concert in 1947, when she was a nineteen-year-old senior at Simmons College. They began an exploration of jazz and the arts that grew through their college years, continued to their marriage in 1959 and lasted throughout their fifty-eight–year romance and business partnership. Together, Joyce and George created a brilliant collection of African-American art dating from the 1920s to the 1990s, which was shown publicly for the first time at the Boston University Art  just a few months after Joyce’s passing. Journalist Ed Bradley noted in the catalogue accompanying the exhibition that to his friends Joyce and George, “collecting art was like collecting knowledge.”

Throughout her life, Joyce was deeply involved with philanthropy, and the arts were not the only beneficiaries of her generosity. She and George established the Joyce and George Wein Chair in African American Studies at Boston University (George’s alma mater). The Alexander Family Endowed Scholarship Fund at Simmons College, from which Joyce graduated as a chemistry major, followed. Joyce was also a founder of the New York Coalition of 100 Black Women. In partnership with Kenneth Chenault and his wife, Studio Museum Board Member Kathryn C. Chenault, the Weins have been major fundraisers for the Harlem Children’s Zone.

George Wein opened the Boston club Storyville in 1950 and produced the first Newport Jazz Festival in 1954 and Newport Folk Festival in 1959. He advanced the business of live music and pioneered the concept of sponsor association with music events. Wein continues to perform, speak and receive honors around the world. His award-winning biography, Myself Among Others: A Life in Music, has become a major reference on jazz history.