Powerbroker Ray Lesniak, the state senator from LD 20, has the war paint on for the election.

And not for the campaign of state Sen. Barbara Buono (D-18), the Democratic nominee for governor, with whom he tousled over the state party chairmanship earlier this year.

Lesniak has his eye fixed on Nov. 5th, on a longstanding war of attrition with the Elizabeth Board of Education, where his longtime antagonists Rafael Fajardo and company are trying to defend their territory on the unknown campaign turf of a partisan election.

They’re used to making that stand, and winning, in April nonpartisan elections, and this year, Fajardo is robo-calling relentlessly in an effort to keep Lesniak at bay.

Fajardo has tried unsuccessfully to make incursions into Lesniak’s legislative dominion, and now Lesniak, for years unsuccessful trying to combat Fajardo in April, wants to take his best shot in November.

As for Booker v. Lonegan today?

“My take is no different from anyone else’s,” he said. “I see a low double digit victory for Cory and low turnout, but I have no more insight on this race than my next door neighbor.” 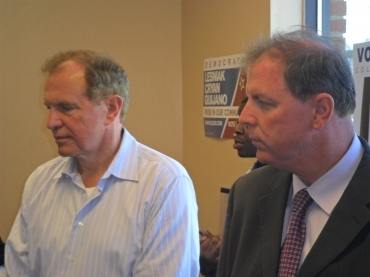