“Since taking office, Governor Christie proved that he would be a partner in the Governor’s office that local officials across this state were desperately missing.  The Governor paired that partnership with strong leadership and a willingness to fight for the big, bold solutions our state needed,” Gerbounka said on a walk-around with the governor this morning in the Union County industrial burgh. “As a lifelong member of this community, I’m proud to endorse Governor Christie for re-election and continuing to work together to deliver bipartisan results for the people of Linden and New Jersey.”

“Mayor Gerbounka has been a partner of mine since I took office, helping me to fight for our property tax cap, toolkit reforms, and pension and health benefit reforms.  These bipartisan reforms are finally controlling the cost of government and delivering the smallest increase in property taxes in more than 20 years,” said Christie.  “I thank the Mayor for his independent leadership and his vocal support over the past four years, and look forward to continuing to make progress for Linden families over the next four.”

Christie joined Gerbounka at the Beyond the C Restaurant in Linden to announce his support and greet residents on Day One of the Christie campaign’s 7-day, 90-stop bus tour to Election Day. 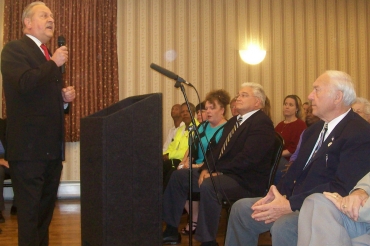