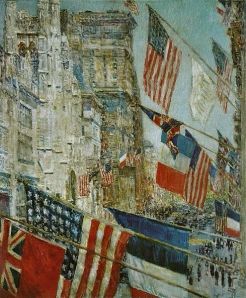 The government shutdown is on, which means that visits to Smithsonian institutions are very much off. The Smithsonian announced yesterday that, in the event that Congress did not reach a deal to continue to fund the government, it would close to the public, as nonessential staff would be furloughed. And here we are.

The closure hits museums in Washington, D.C., like the Hirshhorn Museum and Sculpture Garden, the National Portrait Gallery and the Freer Gallery of Art, as well as New York sites, like the National Museum of the American Indian and the Cooper-Hewitt, which is closed to the public anyway right now as it undergoes renovation. (Presumably the government shutdown is not going to help with that.) Update, 9 a.m.: Thanks to Greg Allen for pointing out that the Hirshhorn appears to have taken the “hardcore” approach of taking its website offline. Update, 1:30 p.m.: The Hirshhorn website appears to be back online, with a message noting that the museum is closed.

The National Gallery of Art, which is chartered separately from the Smithsonian, will also close its doors to the public and keep its offices dark. “Employees will not have access to their e-mail or voicemail accounts during the shutdown,” the museum advised on its website.

It’s a Tuesday, which means that if you’re in New York, commercial galleries are, of course, open. If you’re stuck in D.C., and unable to see some art, why not take your new free time to read S. N. Behrman’s 1951 New Yorker profile of the highflying art dealer Joseph Duveen (arguably the greatest dealer before Leo Castelli or Larry Gagosian came on the scene), which in part discusses how exactly the National Gallery was founded? It’s great.